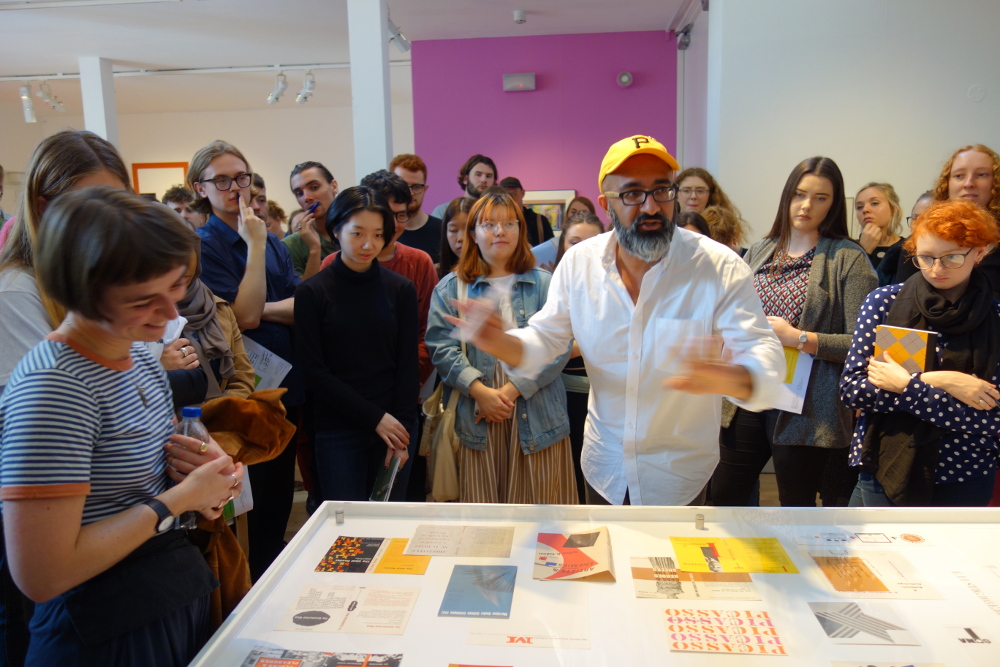 Starting this month, American artist Prem Krishnamurthy opens up the creative process to the public in Schöneberg.

After spending a few years in Berlin and Dresden in the post-Wende 1990s, the New Jersey-born Krishnamurthy moved to New York, where he ran the experimental exhibition space P!. Now back for a year-long residency with KW, he’s repeating the formula with the off-site project K, (“K-comma”). The programme promises to be as eclectic as Krishnamurthy’s genre-defying practice, which spans design, writing, curating and education. It opens with a presentation of works by the late East German graphic designer Klaus Wittkugel, accompanied by a conversation between Krishnamurthy and design professor Jeremy Aynsley – who’s changed his middle name to “Kai” to fit in with the K-centric theme.

What exactly will you be doing with KW?

K, has come out of a longer conversation I have been having with the director Krist Gruijthuijsen about opening a space in Berlin that would in some ways extend, but also contradict what I did in New York with P!. I am calling it a “workshop for exhibition making” to differentiate it from either a gallery or project space. This is a space for reflection, to think through ideas with other people. I will have an office space where I will continue to do my graphic design work and curate projects, but I am also sharing the space with [Brooklyn’s] Cabinet magazine. The editor, Sina Najafi, has moved to Berlin, too.

So what can we actually expect to see in the space?

Basically, I will be inviting people – artists, designers, curators, musicians and others – to spend some time with me. We will somehow change what’s on view, and then we’ll have a public event. But it’s not all going to be artworks. Some people are going to bring whatever they can fit in their suitcase, or photocopies, or we’re going to build structures… It’s not about finished presentations; I really don’t want something in that mode. That is also why we looked for a space that is not right in the gallery districts. It is still close to things, but a little bit out of the way.

Where is it located?

It’s a ground-floor space in Schöneberg. Funnily enough, I lived right there 20 years ago in my second apartment in Berlin – when we were like “Oh, David Bowie and Iggy Pop lived around the corner!” It was an Ofenheizung apartment where we slept two people in a room, while I was working as a tour guide and interning at a graphic design studio. Now that can seem kind of romantic, but back then it seemed depressing.

What is your experience of Berlin today versus the 1990s?

Well, what I think is interesting is that in every moment that I have lived in Berlin, people always say how much better it was five years earlier. When I came here for the first time in the mid-1990s, everybody said “Oh, the early nineties! People were squatting buildings, it was so much better.” Then I came back in the late 1990s and everybody said, “Man, the mid-nineties were so much cooler.” And then I remember about five years ago one of my best friends here said, “Oh man, everybody is so boring. Nobody goes to clubs anymore,” and I was like, “No. We don’t go to clubs anymore.” It’s the age cohort problem. There are still lots of people who are doing all the things we used to do – it’s just not us anymore.

Why create this space here, instead of in New York?

In New York everything you do is on a stage. To be honest, the main reason to live there is to do things that are very public. You can reach a lot of people very quickly. I have already done that for 15 years and will continue to have a presence in New York, but I am super lucky that KW is giving me this residency because it will allow me more space to develop ideas on my own. I have always thought that Berlin was in many ways a much better place to work on things than it was to have as your main place of presence.

I always described it as a production centre, as opposed to a commercial centre like New York – although that might be changing…

That’s an awesome phrase. I think that it is changing for sure and I don’t want to be too naïve or nostalgic about Berlin being this cool city… We just finalised the brochure for the programme and there’s a really funny alliterate text in it that I wrote about process and production. I wouldn’t call it a manifesto, but it says the point of K, is not to show finished products. It is going to be about opening up the process of creative production itself.