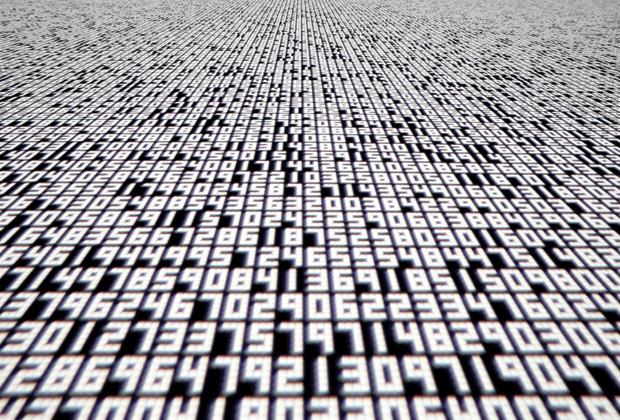 I walk into an expanse of white light with a ringing throb in my ears, happily serene and slightly overcome with disorientation. Meandering toward a gargantuan speaker, I conjure images of cult Technicolor classic A Matter of Life and Death in my mind.

This is the white room where the “super directional parabolic loudspeaker” sits heavily at the far end of the otherwise sparse gallery, projecting sine sound waves, affected in its reverberation by the bodies in the space.

Black squares line the walls, hung evenly at the same level, reminiscent of acoustic panelling used for noise absorption. They also act aesthetically to reflect the square shapes of the white-lit ceiling tiles and the line of pillars that mark perspective, drawing the eye directly to the speaker.

This attention to detail is seemingly endless as the experience of Ryoji Ikeda’s installation accumulates, from the encounter with the title, db (meaning ‘decibel’ but also a mirroring itself in form) to the lists of ‘db’ oppositions (‘dark-bright’, ‘death-birth’) and the balanced compositions of the rooms themselves.

The exhibition by the celebrated Paris-based Japanese artist and composer occupies two identical spaces in opposite wings of the gallery, achieving a sense of harmonious symmetry.

In the architectural other to my bright white limbo, the dark twin of the exhibition immerses the viewer inversely in a black-walled cave. Where the black panels were, screens displaying fast-changing numbers programmed in esoteric mathematical sequences hang ike digital portals, and a powerful white spotlight cuts through the dim.

Aimed toward the far end of the room, it shines through a circular cut-out to a further white room at the back. We see through to the other side, where audiences play in the warmth of the enormous lamp, making shadow shapes framed in the circle of illumination and glitchy data sounds.

Leaving feels a little like waking from anaesthesia; the ringing in my ears has stopped, and the daylight, with its spectrum of colours, feels unsatisfactory compared with Ikeda’s transcendental monochrome worlds.

At once site-specific, sculptural, experiential, immersive and conceptual, Ikeda’s work fuses mediums and influences, proving simplicity is key, and subtle beauty, whilst complex to achieve, is effortless in its appearance.