Berlin and the Berliner Gazette has rallied together some incredible voices as part of the its exhibition revisiting the Snowden leaks, Signals. Don’t miss your chance to catch wicked Japanese collective SAZAE bot at the exhibition’s finissage September 26 at Diamondpaper.

For the Signals exhibition, Japanese collective ‘SAZAE bot’ have responded to the Berliner Gazette call for artistic takes on the Snowden leaks with a sharp makeover of  powerpoint graphics contained in the NSA PRISM documents. They didn’t know much about Snowden or this particular NSA surveillance programme but they did know one thing: no one would want to come close to such offensively badly designs!

The collective is all about anonymity, operating as a social media avatar with a Twitter account claiming more than 200,000 followers. Most recently they caused a storm in Tokyo with their Black Box exhibition, with record-breaking numbers of approximately 30,000 people queuing for something they knew literally nothing about; no information was released concerning the exhibition when it was announced.

Catch them at the exhibition’s finissage (Sep 26, 6pm at Diamondpaper Studio) where they will give a special performance before the keynote speaker, artist Simon Denny.

When PRISM’s secret communications monitoring programme was disclosed by Snowden we were reminded that we are being “always monitored” when we are using social media services. This notion collides with what I call “Anonism” – the principle of turning consciousness to anonymous behaviours in today’s era. I’ve been using anonymous avatars to promote the liberation of the people’s voice.

What did the PRISM leak do for you?

You know Yin-Yang from Chinese philosophy, right? It literally means “dark-light/negative- positive” and describes how seemingly opposite or contrary forces may actually be complementary, interconnected, and interdependent in the natural world, and how they may give rise to each other as they interrelate to one another.

In my view Snowden’s leak has poked a hole through a secret named PRISM and the light is leaking through the hole. And this seems like the “yang (light) point” occurring in the centre of the “ying (dark) place”. This may sound very metaphorical, but somehow I feel that it’s an inevitable event. Now, we have to acknowledge and handle the leaked documents.

For your contribution to the SIGNALS project you have recreated and remixed some of the central PRISM files, combining the aesthetic of the cover of Pink Floyd album The Dark Side of the Moon. Why did you chose these images sources?

Internet culture is central to my activities, and remixes and parodies are an important part of it. A remix creates relationships between seemingly unrelated objects; meanwhile parodies have the ability to capture things in metafiction, making them more humorous and pop.

Pink Floyd’s The Dark Side of the Moon is translated in Japanese as “darkness behind the moon” which is “darkness lurking in the depths of humans”, which means “madness”. Plus the direct approach of the jacket using the image of the prism; the theme of madness fits perfectly to the PRISM documents, so I chose this as an image source. 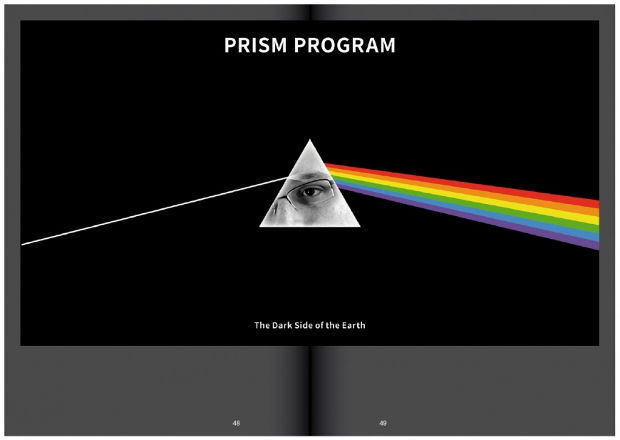 You twisted the album title into “The Dark Side of Earth”. Is this your way of conveying the truth of the subject matter at hand?

Actually this is what I asked myself when I started working on this project. By transforming the Snowden files into a remix-parody work, the truth has changed its “form”. In this era where the truth does not seem to exist, even fiction can turn into an “ugly truth”. So, perhaps I thought a “beautiful fiction” can convey the truth.

A “beautiful fiction” is cultural expression. The truth of every age remains in the minds of people by transforming into culture and being passed down to generations, changing its form. Big stories have always been told by changing its media and avatars. Therefore, conveying truth through cultural expression was one of my answers. In my perspective, the whole SIGNALS project has taken part in conveying the truth in the most inspiring way.

What do the prism and the light emitting from it represent?

The light source represents the vast amounts of data constituting the Snowden leak, while the light that is divided into spectra represents the secrets disclosed by Snowden – so I placed his eyes inside the prism.

This spectroscopy is a natural phenomenon. The leaks aren‘t but we are acting as if they were. We take a selfie in front of the big data mountain, but that‘s it. We do that probably because in the internet, leaks are likely to continue endlessly. But how do we face this information fragmented by innumerable spectra? How shall we associate with this second nature?

You seem to suggest that the leaked documents are like an endless flow and something that we take for granted, but can’t really relate to and make use of. How do you feel about this experience?

Our conscious dimension has certainly risen, but the body that manages this has not yet evolved. In other words, we cannot handle the endless flow of the vast amount of information that digital leaks can bring.

So, everyone instinctively and reflexively chooses a part that is convenient for him or her. It is close to the situation where each person lives in the world severed by the parallel world, just like the world in the timeline we see in the mobile device is different. I’d say this is close to degeneration rather than evolution.

What is your response to this tendency?

“The world is you” is the phrase I often use to transmit this kind spirit of today’s era. But to actually make this happen, we need to repair this disconnected world-line again. It can only be done offline where we are likely to share a common space. In that sense it is of great importance to me that SIGNALS project has chosen formats such as books and exhibitions instead of running the whole show on the internet.

Before you came to Berlin to join the SIGNALS project you realised the Black Box project in Tokyo, where you took your online activities down to earth, making thousands of your followers queue in front of a gallery space in Roppongi.

At the Black Box exhibition, I prepared an empty darkroom. The basic condition was secrecy; meanwhile I encouraged visitors to run false rumours on the internet. As a result, the project generated the largest mobilization of visitors in the history of private exhibitions in Japan. It also generated various controversies at the same time.

I am still reflecting on the lessons of this project, but somehow I sense that some immeasurable desires inside people are expanding enormously and infinitely – e.g. the desire to know the truth or the desire to monopolize information. And since this is difficult to control, I think it is important not to jump to conclusions too quickly and remain curious for as long as possible.

After all, a violent flame burns out soon, but small lights continue to burn over the years. Truly great things are always standing in a secret place. Beautiful things dislike attention.

Are you suggesting that we should look at the Snowden leaks as something beautiful?

Well, maybe this could help to change the perspective. The question of whether it is possible to relate the Snowden files to personal or collective problems and make use of them in life – I think this question is similar to the question whether and how it is possible to maintain a sanctuary from reality. I mean a space that allows us to gather the energies that we need to face today‘s challenges. Such a space may be close to the space of art.

Anything else you would like to tell the readers?

Please allow to quote myself: “Behind the desire for self-manifestation and approval, there hides the desire to empty out your inner self. Because your body is finite, you try to copy your inner self to others. You live every day dreaming of eternity, and die.”