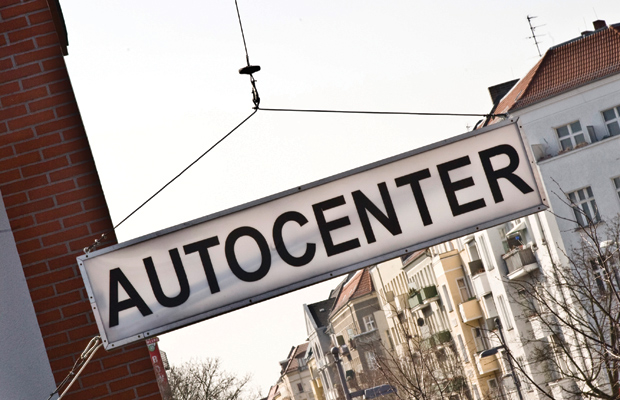 The symphonic soundtrack of Sergio Leone’s Once Upon a Time in the West echoes through the staircase leading up to Autocenter. A soon-to-be-obsolete television displays the spaghetti western classic, a tortuous tale of desperation – a turtle on its shell, desperately attempting to right itself, a warm sun beating down on its malleable abdomen, an ambiguous cameraman scientifically recording evidence of natural selection.

This is not the typical setting for a fairytale story, but the private exhibition space in Friedrichshain founded by Maik Schierloh and Joep van Liefland celebrating its 10th anniversary this year is maintaining a charmed existence.

Maik and Joep met 14 years ago in the (literally) underground club Berlin-Tokyo, a character of the mid-1990s Mitte lore. “It was a techno art club,” Joep begins to explain. “A freaky art club. It was only there for two years,” Maik interjects. Joep continues: “At that time, there was a lot of fusion between art and clubs. We wanted to do art that just happened to be in a club space. But it was about the art.”

So kicking off in June 2001 with a one-week exhibition by the Dutch artist Koen Delaere Maik’s 90sqm club space at Ostkreuz was transformed into Autocenter. It was followed in August by a one-night video-art group show curated by Joep.

And so was born the Autocenter tradition: big opening, short run, move on. Joep defends the methodology: “We are always interested to see what is happening with other artists, what they are making, what they are trying to do. Most people come to the openings. It makes no sense to have the exhibition running for two months.” And is that the reason for Autocenter’s opening hours – two hours a day, three days a week? “We have other activities. We’re not going to just sit here all day,” Joep says.

For Maik, that includes running Kosmetiksalon Babette, an art bar on Karl-Marx-Allee opened in 2003. Joep continues to show his work internationally, recently completing the 32nd edition of his Video Palast installations.

Interacting with progressive trends in the art world helps influence the experience they bring to Autocenter. While showing at Galerie Parisa Kind in Frankfurt, Joep met Adrian Jeftichew, an enigmatic ‘art figure’ who assumed the moniker of the 19th-century Russian wolfman.

“I liked their work, their attitude. On the last day of the exhibition, they came in with some things they had found and turned it into art, just shaking it out of their wrists,” Joep recalls. “It’s not clear to the audience who he is, where he’s from or what he does.” The cruciation of a reptile, the artistic vision of a misunderstood man-beast: suddenly the fairytale is taking shape. A ball would be nice.

In 2008 Autocenter escaped the constraints of the original show- room, tripling their exhibition space with a move one Ring Bahn stop away. Now located above a discount grocery chain on Eldenaer Straße, 333 square metres of space and a large terrace provide more possibilities.

But after 10 years in the non-white cube, it seems wanderlust is taking hold. The summer will be spent on location, first at based in Berlin – where hundreds of album covers will be installed by Manfred Peckl (Jul 1-3) and Adrian Jeftichew will be unmasked/shaved (Jul 7-24) – then in Basel.

That’s a lot of traveling for a space that prides itself on being outside the traditional boundaries of Berlin’s art scene. “We do our own thing on the periphery, try to create a new format away from the other galleries,” Joep says. “It will be nice to go to Mitte and see what’s happening. People always come to us; now we go to the people.”

But the consequential profile raising hasn’t gone unnoticed. Since its inception, Autocenter has been almost entirely funded by its founders – a recognizably uncertain business model.

Enter the anniversary year’s highlight, an auction. Over 30 of the most celebrated contemporary artists in Berlin have offered works for the September 8 fund drive. Works by Olafur Eliasson, Cyprien Gaillard, Katherina Grosse and Thomas Eller, as well as Joep and Maik themselves, will be shown, then sold to the highest bidder. It’s an impressive list, and a creative experiment to keep the story going.

“For the past 10 years, we have paid for everything. Just now comes the time when we somehow need money,” Maik explains. The non-commercial aspirations of Autocenter have met their market-based foe. But the founders still believe in their project. “We play a very different role than the other galleries and institutions, a new one maybe. We are a private exhibition space. And it is a new concept, a new way forward,” says Joep.

The television screening the writhing turtle has run black. It’s from Karl-Horst Hödicke, father of the Neuen Wilden art movement. “I could watch that work all day,” Joep comments as we pass by. Was the animal ever spared? “I assume so.”

And they all lived happily ever after.