With the aftermath of Gallery Weekend still hanging in the air, Kunst für alle is exactly the place to rid yourself from chauffeur-driven BMWs and too many free lukewarm beers. The duck-egg-blue walls and dark wood modernist interior of the off-site exhibition space set the scene for a collection of conceptualist pioneers from Beuys to Polke to Christo. Private collections aren’t usually must-sees, but Klaus Staeck was more than just a collector – he was a catalyst.

It all started in the early 1960s, when artists were seeking independence from institutions. Staeck’s publishing house, Edition Staeck, helped usher in an era in which they could create affordable art in large quantities to reach a wide audience – coining the phrase “Art for All”.

The Staeck Collection documents and catalogues the interplay between art and politics from that time through the present day. On show are personal letters between Staeck and Christo brainstorming the possibility of wrapping Heidelberg’s Amerika-Haus in canvas as part of the Intermedia 69 festival. Their correspondence is shown alongside public critiques of the project, such as an anonymous note declaring “This shitty ‘packing action’ is obviously a great publicity gag for the Amis.” 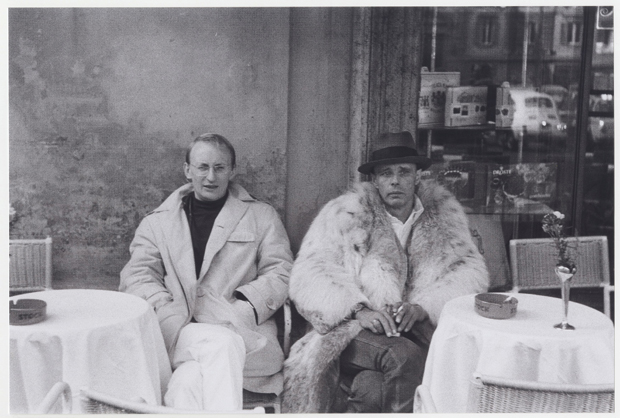 The collection comprises over 400 pieces in total, including some of Staeck’s own works. He made a name for himself through political poster art starting in the 1960s, and over the years has created hundreds of motifs and drawings encouraging and urging society to get politically involved. He started off by selling his artwork to Edition Tangente publishing house to finance his politics; there, he worked alongside and become friends with Beuys, Dieter Roth, Nam June Paik and Günter Grass, many of whom have works in the collection as well.

Throughout the works, you can clearly see the energy of fierce, spontaneous action against oppression, not only in Vietnam but also on home streets. A whole section is given over to the collective General Idea, which tackled the AIDS Crisis from 1967-1994. Originally, the collective was made up of three members, Felix Partz, Jorge Zontal and AA Bronson; sadly, both Partz and Zontal died of AIDS in 1994. They’re best known for their large-scale pill sculptures entitled PLA©EBO, but their most harrowing edition is presented here: a simple postage stamp that culture-jams the infamous Love print by Robert Indiana, exchanging the word “Love” with “AIDS”.