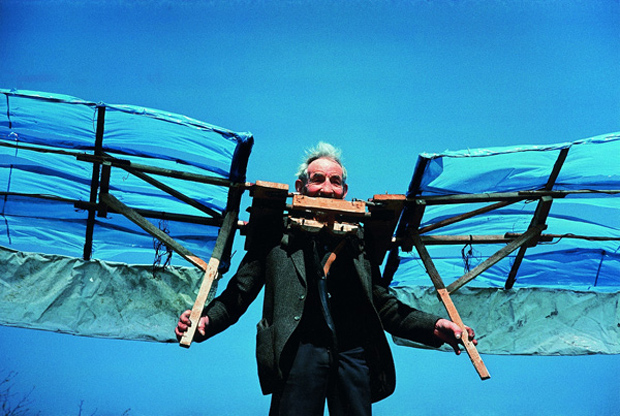 Tiergarten’s giant oyster is this time around ‘pregnant’ with an ambitious interdisciplinary experiment, an attempt to explore perhaps the most common subject of a wistful afternoon’s childhood fantasy: the dream of flight.

No doubt a big undertaking, and The Art of Flying offered its curators no shortage of artefacts, from art to technology.

Straightforward painting is represented in the form of a Tullio Crali piece Incuneandosi nell’abitato observed from a cockpit’s eye view of plane that evokes some of the grander shots in Metropolis and a curious piece entitled Vatican Air Force that shows a model aeroplane painted with a contemporary take on Michaelangelo’s religious iconography. These are hung next to such seemingly unrelated artefacts as Native American headdresses and an original Zoetrope from 1843 depicting a goose in flight.

Whilst there are certainly some alluring pieces, the collection itself is so varied and indiscriminate that it feels a bit like walking around a Hollywood props warehouse. There are large scale models of Wright Brothers-style contraptions.

Sections include detailed, scientific diagrams of the workings of the inner ear and some cinematic projections ranging from yet  more geese flying and section’s from Howard Hughes’ Hell’s Angels. This all increases the creeping sensation you’re back at elementary school on a day trip to the local science museum.

So this is the perfect show to take along a kid who wants to be in the RAF (the Royal Air Force not the Red Army Faction!). Just make sure you bring something to colour in, and Mum’s sandwiches!