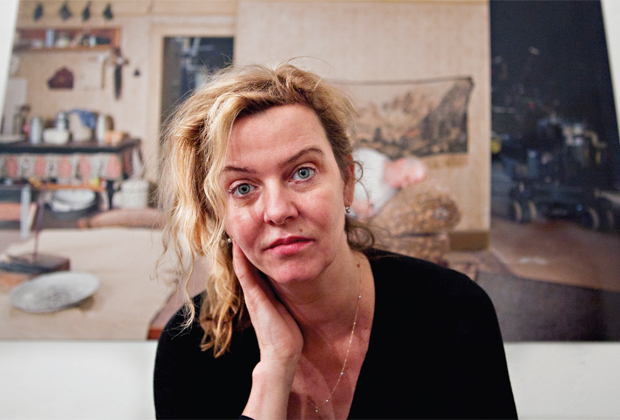 The photographic work of actress Margarita Broich is the focus of When the Curtain Falls, opening March 18 at Martin-Gropius-Bau. Broich’s photographs capture actors in the moments just after performing, when they are in the transitional state of leaving their characters behind. Over 60 portraits, including those of big names like Kate Winslet and John Malkovich, reveal private sides of the performers that the audience rarely glimpses.

How long have you been working on the photographs that appear in this show?

It really started 10 years ago with my self-portrait with the blood in 2001. At first, I didn’t consciously think about taking pictures after performances as a theme. It was instinctive, like an animal. Maybe after six years, I looked at the pictures I’d taken, and I started to move in a more precise direction.

Can you get more access to your fellow actors because you’re a colleague, and there’s a certain level of trust?

There is no one in this show that I don’t know personally. These actors are friends or people I have acted with. I would never knock on the door of an actor and ask to take his picture, after performing before taking a shower, if I didn’t know him.

You have them at a special moment just as they come offstage. It’s an intimate moment. There is no fear; you are between worlds. Maybe you have your costume on, but everything falls down. Everyone in the pictures is in the process of exhaling. Usually when photographing actors, they’re breathing in, controlled, crafting the mystique. Their egos get in the way. In my pictures, the actors are just sitting and doing nothing. I think that’s what is special about them.

What is the difference between photographing backstage versus on a film set?

In the theatre, I have maybe five minutes after the show. After that, the moment is gone, and the actors want to take a shower, or they’re hungry. So I have to work very quickly. I can’t do any special lights or technical things. With film sets, the actors are shooting 14 or 16 hours a day. They look tired, and they’re not like actors onstage, alive with red ears and sweating. It’s pure exhaustion at the end of the day.

In most of your portraits, the actors establish direct eye contact with the camera. Did you instruct them to?

Usually they look into the camera because they’re looking at me, and we’re often talking. They know me. I’m the camera at that moment. But also, if they don’t, I’ll ask them to. I don’t want it to look like I’m capturing them without their consent. I want the viewer to know that the actor is aware I’m taking a picture of him in that moment, so that it doesn’t become a forbidden view. It’s more of a dialogue.

Why do you think the photographs of these actors have such impact?

There is something about all this eye contact, all these people looking at you: old people, young people, silly costumes, big red noses. I was touched; I think there really is something about documenting this profession. It’s sometimes sad, lonely, difficult. You earn as much in one day on TV as you do in one month in the theatre. And sometimes it’s nice for people who are not working in the theatre to see these wonderful actors sitting in ugly surroundings. For example, I’m quite fond of a photograph of Maria Callas where she is sitting next to an old coffee machine. This is the way it is behind the scenes. It’s not usually glamorous.

WHEN THE CURTAIN FALLS. MARGARITA BROICH – PHOTOGRAPHS | Martin-Gropius-Bau. Mar 18-May 30