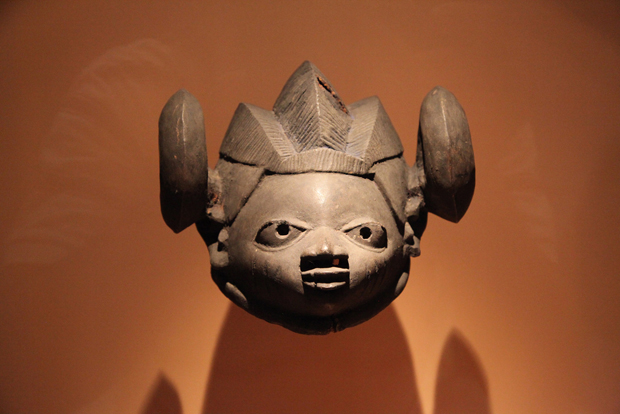 Berlin has its fair share of post-war historical resonance and plurality of cultures, yet it’s a mere hiccup in the story of the development of the world. In After Year Zero, Franke asks us to look a little further beyond the Wall, the European Union, and the Western world – to Africa.

Artists John Akomfrah, Kader Attia, Yervant Gianikian and Angela Ricci Lucchi, the Otolith group, and Jihan El-Tahri examine foreign ideologies that were forcefully implemented, collectively adopted, even used to mask genocide and the continuity of catastrophic destruction. The ‘white man’s burden’ is clear, but only through the assumption that Africa must now be saved. The question is, from whom?

After 1945, the world had to reinform itself and constitute a new world order. By that, I mean a global community that had to step out of a world hierarchy constructed by colonialism. The Eurocentric historical awareness clearly was determined by and dominated by the Eastern Bloc and the Cold War. We asked, what is missing? How do we achieve a larger perspective?

How did you formally develop the exhibition?

Last year, we received a grant from the Goethe Institute to put on workshops with a form configured by Annett Busch [the 2012 series “Matters of Collaboration – Africa/Europe/Africa”]. We invited artists to enter into a conversation – I would dare to say out of an existential need to articulate the questions that concern us and gain initial knowledge of the concerns of the participants. We filmed the workshops to have an archive of conversations, some of which are also based on long-term dialogues and friendships. We all moved through territories like art, documentary, historiography, filmmaking and politics. The exhibition includes not only excerpts from the workshops, but also products of the collaboration that took place.

What did you learn from the workshops?

We noticed things like anti-tribalism embedded in the colonial movement. We asked, where do these ideas come from and how do they play out as cartographies? In Ghana, the problems play out in a particularly exemplary way, and so Ghana is the country most highlighted in the exhibition.

Why present this exhibition at HKW?

Whatever you do at HKW is never pure art. It is also historically informed stories from which one makes sense of where one lives. Working in this place has seemed logical in an attempt to make exhibitions that have a form of history telling and engagement in narrative. In this case, we are addressing the instances of post-1945 and the conception of the world, especially to question under what contracts and conditions a dialogue of cultures takes place. From 1945 to the mid-1960s there is a history of conflicts of interest and antagonisms.

How does historical awareness become art?

Honestly I don’t care much about the definitions of art, and the concerns of the people I work with are anti-systemic. The exhibition is investigative. The project is driven by an emergency to form a research practice and historiography due to an existential need we have. What makes it unproblematic for me is that each of the participating artists has strong concepts of what iconography is in relation to history. Images carry historical consciousness.

How did you determine the artists?

The artists, with one exception, were participants of one or more of the workshops and we chose them because they were vital to our conversation. They share a certain necessity that characterises their work. Every work here examines how ideas become plans and begin to speak out. Conceptual maps talk about future visions and the adequate framing of history, for example the African history of modernity. The only adequate frame was Pan-Africanism.

How do you consider Pan-Africanism?

It is an important subject for debate because of what is entailed in reading African history. Those who formed the movement were all Western-educated; even the first Pan-African conference was in Europe. These people didn’t really have an African experience. Even those who did were African American or British. Pan-Africanism is born in the colonial centre as opposed to in the colony.

What do you hope to achieve with this exhibition?

To find a model for Africa to break out of the regime of colonial oppression and for the voiceless oppressed to have a voice. There’s an impasse inside the critique of historical representation. What I’m trying to do is break through this impasse.