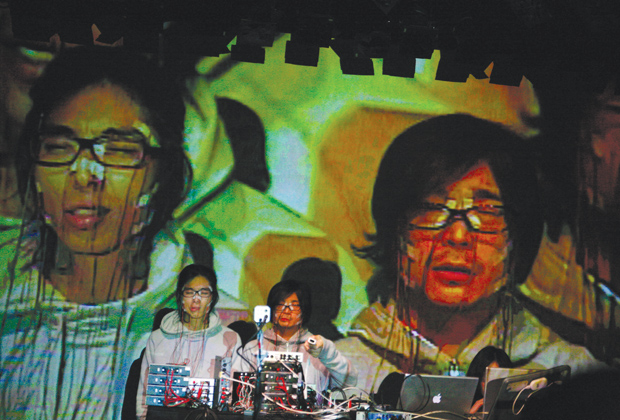 Each February, netizens gather in Berlin to plot the digital world as it emerges from the internet. From the Haus der Kulturen der Welt’s pregnant oyster, hacktivists rewire the mechanism within, while the tech-art vanguard displays art projects that illuminate the secret chambers within its architecture and activists plot how to take on Web Inc.

Transmediale artistic director Stephen Kovats is packing up his laptop following this year’s fest after five years at the helm. Here’s his report on the Information War from the Art Front.

Transmediale has changed a lot over the years – why?

The context of art has changed radically. As people spend more time online, art, free expression and creative industries need to be fused. The festival is a platform for exchanging ideas, giving birth to collaborative projects between artists, activists, hacktivists and cultural theorists. I think it will develop toward defining the word ‘open’ – the open net, open architectures, open culture.

What is ‘open culture’?

It depends on the context. We’ve just introduced the transmediale Open Web Award with the Mozilla Foundation – their mission is to define and build the ‘open net’. But even they don’t really know what that is yet. The basic idea is to use technology available to everyone, or make people aware of these weird hidden territories – open architectures – in the internet, which you can get at and build things with.

One of the nominees is Thimbl, a project by the [Berlin-based] telekommunisten. It’s an engine for creating your own social network using the Finger protocol, which was developed in the 1970s to allow computers to talk to each other. Every server in the internet has this protocol; it’s an incredibly powerful piece of completely open architecture within the web. People at the top of the internet hierarchy do not want to talk about these things…

Right. WikiLeaks is an important issue for us this year. It’s highlighted this idea of the internet as an open platform for discussion. People are finally beginning to understand that there’s more going on inside the internet than what you see on Google.

In itself, it’s nothing new. [WikiLeaks founder] Julian Assange belongs to a long tradition of activist-hacktivist people, working with infrastructures to show what’s behind what we see – finding the back-door – and putting that together with the whistle-blower tradition in the US. It’s just that he really went all the way with it. The success of WikiLeaks shows how it can be made to happen.

The title of transmediale this year is “Response: Ability”. Is WikiLeaks response:able?

There was a lot of early scepticism about WikiLeaks. Because of the way it works, they can’t disclose their workings. So you have this funny self-referential scenario centred on ‘transparency’. It’s a bit like the problem with the Stasi: you don’t know whether a dossier is full of truths or not.

What’s on the agenda this year?

We’re experimenting with the format, looking into the nature of ‘liveness’, how we act online, as well as ‘where’ we are when we’re online. We’ve asked artists to put their ideas about the difference between our ‘real’ and digital lives on the table.

What issues are you dealing with from the ‘real’ world?

We are entering the era of the ‘megastructures’ like Facebook. The problem with these digital structures is that people lose a sense of where they are in there. The activist element at transmediale is about recognizing where you have possibilities for control.

There’s an anti-Facebook movement emerging. People are beginning to feel trapped in this system. One of the transmediale award nominees is a project called Seppukoo, a virtual-suicide machine for social networks. It’s extremely difficult to unsubscribe from Facebook – it’s like life. Digital suicide may be the only way out. It’s a radical step. So, what space are you in when you’ve committed social network suicide? Do you lose touch with your real friends?

There is also a project premiering at transmediale called Face to Facebook, which uses an algorithm to characterize features and facial expressions, then assigns character traits to them. It goes from the real profile, creates a false profile, then returns to the real profile to create matches and connections outside the architectural realm of Facebook.

The artists, Alessandro Ludovico and Paolo Cirio, also collaborated on a project with UBERMORGEN. COM called Google Will Eat Itself. You clicked in Google to purchase an ad, and it bought a share in Google. So, by using Google, you were buying up Google. Google didn’t like it. They slapped a court order on it.

So how can art respond to this changing technical and social landscape?

Well, first, it needs to have the space to do that, and that goes to questions about freedoms of information, speech and assembly. That space is closing down. As the lack of security online and in government systems is revealed, you see governments moving towards a lock-down – much like the Chinese model. That’s also beginning to happen in Germany, although with much less intensity than in the U.S.

Remember, officially China has no ‘censorship’ – but rules and legislation on access to information: it’s a technical question of whether you can get through the technical blocks and controls somewhere else down the line. If you get to the point where you’re shaking the foundations of the state, which is often done by very symbolic gestures – as art does, as WikiLeaks has done – things can start to get very tricky.