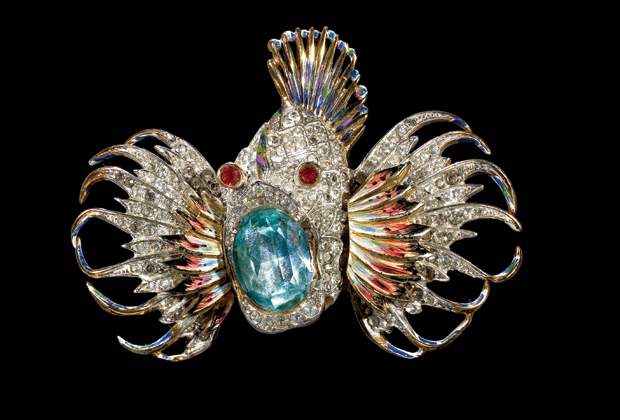 Turin-based contemporary art collector Patrizia Sandretto Re Rebaudengo puts her bling on display in the Wunderkammer at Me Collectors Room.

Re Rebaudengo is internationally known both for her large body of key works from artists since the early 1990s and her cultural foundation, which supports exhibitions in venues such as MoMa and Tate Modern. But her collecting obsession does not end with art. A percentage of her costume jewellery collection dating from the 1930s is on view until September.

Why did you start collecting?

An American friend of mine used to collect, so she took me. She introduced me to it. She was living in California and I used to go visit her. And so it started. From the beginning, it was something fantastic. I am not an artist, I am not creative, but I like a lot that is creative, and I feel that this is my art.

So you just started by buying pieces you liked at flea markets?

First, I bought without thinking. I just bought one, and then two and then three… But it starts changing when something is really rare and difficult to find. I remember I was in America at a flea market and there was a man that had two or three of these Jelly Belly pins from Trifari. He said to me, “Why don’t you come to Sarasota, where I have my home, and if you like you can buy more?” So I went and I bought I think eight or nine and I was so happy, but then later I realised there are millions of these Jelly Bellies out there, and it wasn’t necessary to go to Sarasota to buy them.

Who are the vintage jewellery manufacturers we should know?

Trifari is important. Eisenberg from the 1940s or 1950s is different; you can recognise the period. I remember I liked this cockpit piece from Trifari. It has a fantastic story, I don’t know if this is true or not, but they said they were made after the Second World War with leftover metal used in military plane cockpits. There was a restriction during the war on precious metals, so they used this kind of Lucite stuff. The jewellery really traces American history. In the case of contemporary art, it’s different. The artist is alive and you talk to them. You start to know, and THEN you have to study…

Do you have other pieces with memorable stories?

There is one called “Jackie”. It was based on a beautiful necklace that Jaqueline Kennedy Onassis’ husband gave her, which was obviously very expensive and very rare. She went to Kenneth Jay Lane and said “I would like something like this, but not so expensive.” And he told her, “If I produce just one for you, it will be very expensive, but if you give me the opportunity to put the same object on the mass market, you will pay nothing”. She said yes. And because of that, there is now the ‘’Jackie” necklace.

Was there a point where you started to look for that specific necklace?

At a certain point, yes. When you start at the beginning you don’t have anything, so you can buy. Then you start to think about what you need and want. If you know some pieces that are very rare, you start to ask sellers, “If you find one of these, please let me know.” If you know there is some necklace that is very difficult to find, you say so. You start to know more.

Do you have an eye for modern pieces as well?

Absolutely, but yes, I think that what is very important now is to buy the very rare pieces. If you want to. When I started to collect this kind of jewelry in America, nobody wanted to collect it. These days, it’s changed quite a lot.