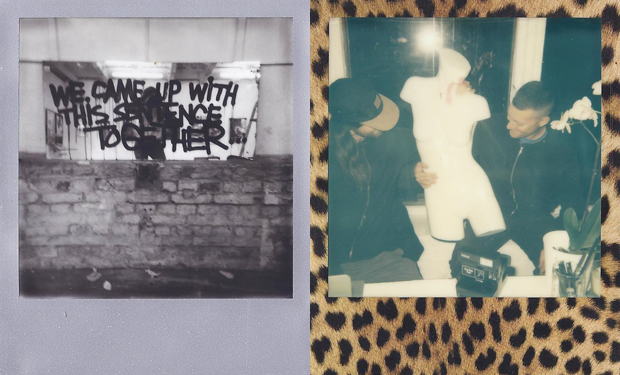 London-based multimedia artist Dscreet is best known for his owl image, which can be seen scrawled on buildings all over the world, slowly being featured in documentaries and books archiving the most iconic of the urban art scene. And now he’s in Berlin producing a street art sensation at Urban Spree. Some might call it curating, but what he and his street art collective DUBL TRUBL have essentially done is organize a meeting up of some of the most famous and talented superstar ‘derelicts’ of the graffiti world. Paired in twos they’ve had the run of the Urban Spree compound, creating more art and havoc as they go.

What was your vision in pairing up the artists?

It’s a joke that went too far, in a good way of course. It’s about mates hanging out and pushing each other to do things they might not be able to in their normal practice. There are a lot of pre-conceived expectations on some of these individuals from their fan base, so I hope this collaborative approach lets them get loose and have fun.

You’ve all completed some really cool wall murals on Urban Spree’s house walls in quite a short time, and you’re using the exhibition hall to create more representational art of what’s going on outside. What’s more important, inside or outside?

It’s what’s on the outside that counts. Really I think a lot of us do everything both inside and outside, but the art world would like to pigeonhole people into certain defined categories, I think this (inside / outside approach) is more honest, and just allows everyone to do what they do anyway. We all know both worlds feed each other and most of us wouldn’t have ended up in galleries without the street schooling in the first place.

Why is it important to give urban art a venue, such as in this show?

To show what these artists do with a more rounded view. Why hide what they do on the streets or separate it from the gallery stuff? I find that approach kind of weird, with most of the galleries in London – keeping the two things separate when they are done by the same people. I think there’s obvious limitations with the conventions of the gallery scene. Of course something’s lost when you take it off the street, but all these artists are talented enough to know that, make the transition and to do something different inside that suits that context. Urban Spree’s the ultimate venue for this, we like their open-minded attitude that you can do anything there, they create a cool atmosphere for the artists to hang out and do their thing.