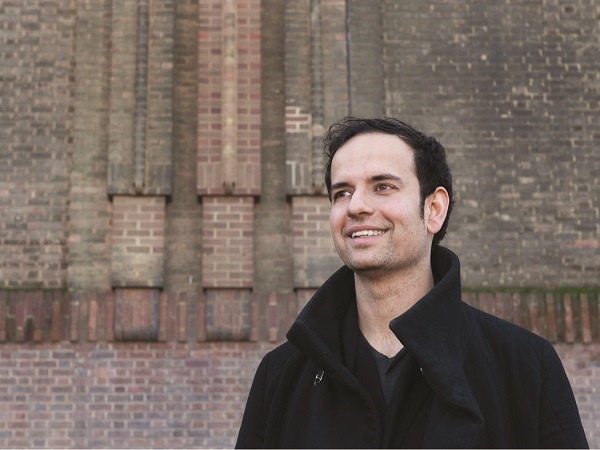 This is your last week to catch Berlin-based Tino Sehgal’s “social sculptures” at the Martin-Gropius-Bau. Don’t miss out!

An androgynous couple embracing on the floor of a pitch-black room. A little girl pretending to be an artwork come to life, questioning you with wide eyes about whether Berliners ever get “tired of being creative”. A choreorgraphed a capella LCD Soundsystem cover. These are just a few of the “situations” you might encouter in Sehgal’s five-room mise-en-scene on the ground floor of the Gropius-Bau.

Sehgal won the Golden Lion for best artist at the 2013 Venice Biennale, and has shown at venues such as New York’s Guggenheim, the Tate Modern and the MoMA. Each work in his Martin-Gropius-Bau exhibition comprises a cast of performers from young to old performing choreographed movements and interacting with visitors – “constructed situations” which examine the flip side of modernity. Another work, This Progress, was on view at the Berliner Festspiele’s Foreign Affairs festival through July 5.

How do you define what we’ll see at the Gropius-Bau? Is it dance? A live art installa- tion? Both, I think I’m still working very much in the direction of dance, especially with the show at Martin-Gropius-Bau; it’s just happening in an exhibition space during the duration of its opening hours over six weeks. Bill Forsythe once said to me in 2006, when I was saying something about how I “left” the dance field, “You didn’t leave the dance field, you’re just expanding it.”

So you’re kidnapping dance away from the stage…? The whole thought that we should see dance on stage is almost like a perverse idea. In some cultures dance is seen as a way of achieving trance or a common ritual, but in our Western culture its something put on stage. You’re supposed to contemplate it, judge it, look at it – it’s like a way of cooling down these kinds of Dionysian energies of dance by looking at them from a distance instead of participating. That’s, to me, very ‘modern’ – but a very unusual and counterintuitive idea. I don’t think stage dance will necessarily be there forever; it hasn’t been there forever. Quantitatively, there’s more dance in clubs nowadays than on stages.

What sort of thoughts on modernism played into this show? I think a lot about what Ulrich Beck said about the modernist movement as one that takes things apart: in traditional societies you’re born into a certain family or religion, and then you’re stuck there. Today, because of the social and cultural mobility of modernism, you can be an individual. I’m totally part of that culture, and I like that idea of mobility and flexibility, and the market, and I don’t like the idea of an aristocratic, feudal rigid thing, where everything’s set. But it seems like now our problem is not that we’re too rooted, like with the class system or feudalism where we can’t get out of there. Now we are floating so much that we need to understand how to make temporarily roots for ourselves, or roots that are not rigid.

Your work takes art to new realms – do you really think of yourself as ‘radical’? I don’t want to break things apart. I want to situate something and connect to a particular space. The white cube belongs to this cultural mindset of modernity: it’s a space that singles things out against a white backdrop and implies flexibility; everything could potentially find its place there. If you think of any other cultures and their ritual spaces, they represent fixed cosmologies. The white cube enacts a liberal, open cosmology.

What’s the allure of Martin-Gropius-Bau’s space in regard to your aesthetic? A place like Martin-Gropius-Bau is architecturally interesting for me. It doesn’t fully go along with this modern mindset I just mentioned. It does have white cube spaces, but there’s still the original ceiling and the ornamented central Lichthof with its ceramic floor. On a personal level, if you think of me as a choreographer, I just don’t show as much as everybody else. I’ve never really shown a major thing in Berlin. But when the invitation from the Gropius-Bau came, I was happy. I really actually like the place because of its architecture and public.