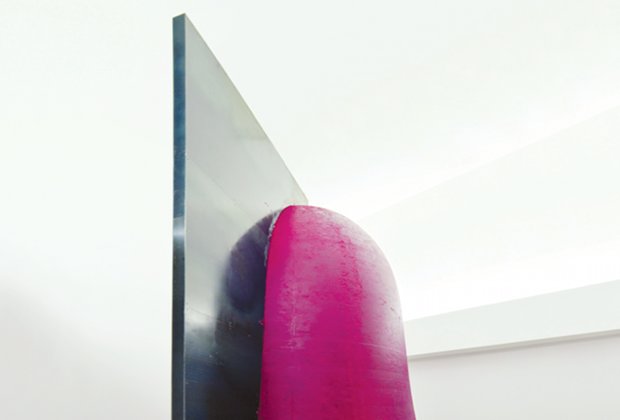 Giant conveyer belts aimed at the sky slowly carry colossal red bricks made from oil and wax, each quietly travelling higher, until… splat! Kapoor’s first solo show in Berlin includes unexpected, jolting audible components, delineating the sculptor’s range of work as he traverses material disciplines with the grace and ease of a true master. Kapoor’s widespread global fame has left the recently knighted India-born Londoner with a modest graciousness and diplomatic charm. “I have nothing to say,” he repeats when asked about his message. Rather, he confers that his work merely portrays a process, asking questions instead of staking claims.

Your work has spontaneous and visceral qualities. How do you balance the two?

It’s very calculated of course, and in a way spontaneity happens of itself. What I’ve done with these works is set up a process that takes place almost irrespective of the surrounding. It’s a process that has its own life, so it will do what it does. Blocks fall, spread out and do their own thing. It’s a kind of very informal theatre.

How do you compare materiality and colour?

Colour is important to me. Not colour generally speaking, but pigment as a material quality and from it different ways of using colour as quantity in a different material reality. I’m interested also in colour when it goes towards darkness. I work with red a lot. Red has a kind of darkness, a darkness that each of us knows.

What are pervasive themes for you in this retrospective?

The new works interest me most, like Leviathan. They’re all dealing with a certain kind of informal language. While they’re quite care- fully controlled, they’re also informal. That’s maybe where I’m going somehow. The main content of the show has been with me for a long time: the idea of various states of an object.

How do you confront objectivity?

What are the conditions of the object, how do we as viewers look at objects? We never look with innocence. We always look with fear, desire or bias that doesn’t allow us to see something. What is the object, how uncomfortable is it, the anxiety of the object and its relation to the viewer. Trust is all there is. I’m the only measure I have. As a general rule I think that if it works for me it will work for somebody else.