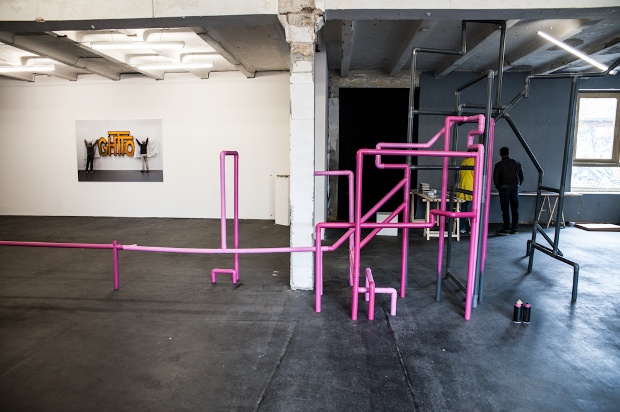 Rough ‘n tough (except not really), DIY, ghetto-fab. Welcome to Berlin, where public squalor is in vogue and grunge is either a default or a contrivance depending on the person. Our fair city strikes a unique balance between slum and safe haven, with crime rates well below those in comparable European capitals. We Berliners can have our chic, filthy cake and eat it too.

Group show El Segundo. Instinctive Travels to the Hauptstadt, curated by Lukas Feireiss, is inspired by the subject of the Berlin street as a political and social space. Over time Berlin has continually been hailed as a hyper creative zone, attracting artists of all fields from all corners of the globe. With said influx of newbies comes a constantly changing Berlin that forever reinvents itself, therein reviving its very own myths.

Along with the intercultural exchange comes invariable gentrification, yet Berlin has managed to retain much of its grubby appeal.  But what, exactly, is being sacrificed in order to uphold this contradiction, and how long can Berlin stay cool? The pieces in the show all explore, to some extent, the transformation of Berlin’s streets and their widespread attraction.

Contributing artists Janjoost Jullens and Baschz Leeft work in Rotterdam, their work focusing mainly on mass/subcultures and societal issues. “I see gentrification happening,” says Jullens. ” A real ghetto is really raw, and when we bring it into a gallery it is in a way empowering, but also playing it safe. Instead of going to the ghetto we go to a gallery and try and feel ghetto, that’s the same thing that’s happening in Berlin. Pascal, the owner of Urban Spree put it well. He said ‘this is underground but safe’, like a street art theme-park”.

Leeft adds ” The word ghetto itself does not have a lot of strength.  Ghetto fabulous is even worse and a bit more hip than I would consider myself to be. It’s overused and can now mean anything. For us Berlin is completely underground but safe, but I can see how hardcore born and raised Berliners might see this place as a sort of Berlin Disneyland.”

El Segundo. Instinctive Travels to the Hauptstadt. | May 31-June 21