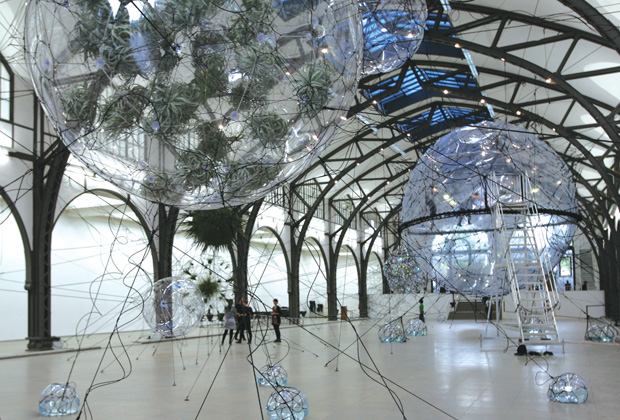 Soft, suspended balloon-like structures float from harnesses anchored to the hard floor of the Hamburger Bahnhof’s main hall. The organic looking spheres are made from a synthetic material that is entirely transparent, but they contain life. Some hold water, others sprout plants reminiscent of illustrations of ancient gardens, and the largest one waits to hold human life.

Lining up in turn to climb the stairs and enter the floating cloud prompts a mixture of anticipation and excitement. When finally ensconced with one other person in your transparent cocoon, you are able to bounce around on the air-filled cushion, lie face-down looking through the see-through ‘foil’ and see the rest of the room and the other visitors from inside your own futuristic bubble tower.

The effect is otherworldly, conjuring images of science fiction landscapes and long lost Jurassic forests. But the definition of science fiction, or more accurately what Margaret Atwood terms “speculative fiction”, is that it offers us a vision of a possible future.

Cloud Cities is Saraceno’s ongoing investigation into these possibilities through ecology, biodomes, solar energy and vessels for sustaining human life. The experience of the exhibition is monumental and personal at the same time, as, perhaps, our vision for what is next for humanity should also be.

Are you pleased with how the show’s going so far?

Yes, I’m very happy. I didn’t expect that there would be so many people for the opening!

Have you been watching people experience it?

Yes, I’ve been observing for quite a while, because some of the pieces have been existing in other locations, but the people in every place behave a little bit differently.

What’s the best thing you’ve seen somebody do in response to your sculptures?

I always like to see them smiling, you know? At the beginning they mostly have a kind of scared face, but then when they are up there, they smile. I see people mostly being happy, and it makes me happy. That’s a great response somehow.

And is that kind of childlike engagement and freedom important to you with regards to your work?

Yes, I think so. I love children, and I love Dan Graham also, and he makes all his pavilions thinking about children. All of us have been children, and sometimes a work will remind you of that.

Lately I’ve been thinking about that feeling of when you walk for the first time, but in this case I think more about the idea of two people trying to walk together. Like when you walk, you might move the other person in someway.

There is a kind of responsibility or shared capability. I’m always thinking about this in other mediums as well. For example, when you are in the water, you might ride some waves and have feedback and connection with other people in that water, or when you are in a boat maybe. Your movement really effects the movement of the others.

Like in Cloud Cities– when you’re in the suspended bubble cloud, your weight affects the weight of the other person and it makes it a playful experience…

Yeah, and also it kind of speaks to you, because the world inside the bubbles is almost beyond language: usually people only communicate with their eyes and with movement. It’s something so direct. I like the idea of going beyond language with the body.

For example, if we did an experiment in this room and you are trying to talk with me but you are watching my eyes, at the same time I kind of keep moving and nothing happens. But if we do it up there in the cloud, and while we’re talking I start to move my centre, then it would affect the way you talk and the way I react.

I hope to generate this idea that it’s a kind of shared relationship, how we behave, and how this might affect the perception of this current moment.

And does that link with your interest in utopias as well?

You know, sometimes I think about the utopian relationship to a dream. When you have a single dream, you are alone, but I like the idea of sharing the dream, and how through this dream, you are responsible for sharing ideas.

I also like thinking about the future, but with an ‘s’ at the end – possible futures. Then you can imagine the way the future could be through engagement and construction.

Do you engage with politics and current affairs with regard to that idea of utopia or is your exploration more rooted in your physical engagement with the world?

Well there are many things that reverberate. I think that globally, people today feel a lack of capability and possibility. The first step in building capability would be to allow people across the planet to share, to establish a channel to communicate.

When we talk about a ‘world wide web’, we should never forget that two thirds of the population of the planet do not have access to certain tools of communication, and so these people suffer from many of the decisions that one third of the population make. The first thing that we have to be aware of is the necessity of at least trying to engage all three thirds, in an attempt to share ideas.

Today when we talk about climate change or many of these topics, that first effort should be, “Let’s not base decisions solely on the opinions of a certain, very limited amount of people living on this planet.”

There are also certain technologies that exist today, and sometimes artists or other people could bring different kinds of imagination about how technology could be utilized from another perspective.

Is that important then, the role of the artist in imagined futures?

I think so. I think it’s interesting, yes.

Science fiction writers have been imagining a future for years. The future has, in a sense, already been made up and written by the media and authors and filmmakers…

I think actually that ‘futures’, this simple adding of an ‘s’, helps people to think that the futures are not something that is done with. There are many technologies today: Linux, Wikipedia, things that manifest largely in the digital world and that put power and potential in individuals.

By this empowerment of the individual, we might be able to build, from the bottom up, a network relationship that could gain power and control over certain things, like a shared democracy that could somehow build futures.

We know we can build Wikipedia, Linux, etc. but we might be able to build a city! Then, in a certain way, it builds reality, because reality is just about the engagement of people into a certain conversation. And that is something that does interest me.

All of your work is very biological and has these links with the natural world fused with the concept of the city.

We are flying now, today, we are flying on planet earth, and there are many cities; we are flying around the sun at a very high speed on Spaceship Earth. When we talk about nature or detaching ourselves from our position in relationship to something else, for me at the moment it is not so productive to separate humans, conceive of them as something beyond the natural world.

By calling nature something that we are not part of, we start to mistreat it, and separating the two things (which is something we do today) is dangerous. It’s a big ecosystem to which we belong and which we are a part of, so we need to have a more symbiotic relationship.

What are your more pop cultural influences?

What drives and excites you every day?

Thinking that I will build a kind of flying studio. I’d like to cross the Atlantic in my floating studio and maybe make a movie about it – that would be interesting. I don’t know if it will have the scale of a city, but yes, having fun crossing the Atlantic with all that energy and the wind, and the fishing.