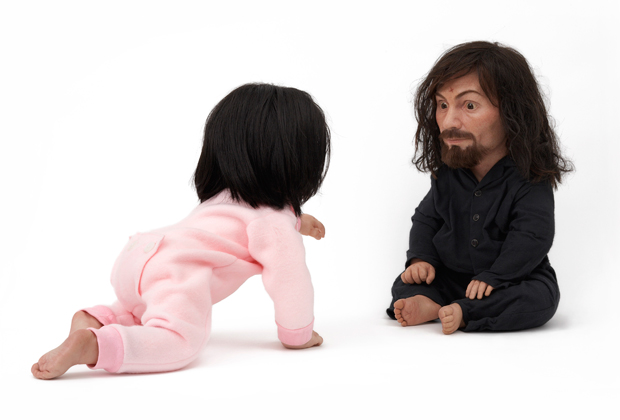 Opening February 6 is a month-long solo exhibition at Sprüth Magers by none-other than John Waters!

Better known for his transgressive cult films and trademark inventiveness, Waters drives the knife even deeper with his visual artwork. He began making photo-based art and installations in the early 1990s, showcasing his insider movie knowledge by focusing on key film-still moments that other people would easily overlook.

He engrosses himself into every detail of his works, keying into such details as work titles (like in his mischievous One-liners series).

Not to miss are his impressive sculptural works of notorious figures such as Ike and Tina Turner, or Michael Jackson and Charles Manson reborn as diminutive babies (“Could they have saved each other if they had met on a play date before their lives went wrong?” asks Waters, tongue in cheek).

Three of his earliest film works will play on loop in specially designed peep rooms: Hag in a Black Leather Jacket (1964), Roman Candles (1966) and Eat Your Makeup (1968).