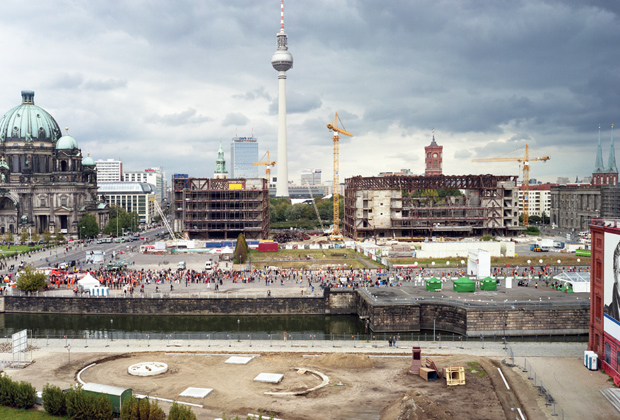 Open airfield Remember the ‘squat an airport’ protest in spring 2009 that demanded open access to Berlin’s largest empty space, the Tempelhof airfield? Well, looks like it worked. This summer, the gates were opened on what is now Berlin’s largest park. At three million sq. metres, Tempelhof surpasses even Tiergarten and comes complete with a BBQ area, a rollerblading track and a dog run. It’s even expat-friendly with neat, large signs in English.

Terror takeover In November, Berliners succumbed to terror. We can always rely on our Ami friends to tell us when to get scared. The fake bomb found on a plane headed from Namibia to Munich didn’t help. Federal police with semi-automatic weapons started patrolling stations and airports. They even closed the Reichstag to potential visiting terrorists! Thank god Berlin Interior Minister Körting was there to tell us what to do: call the police if we see “at least three strange-looking men speaking Arabic or a foreign language you don’t understand”.

Blue man group As the last cops in the EU to get with the programme, the Berliner Polizei have been trading in their quirky green uniforms for dark blue ones, complete with tough-guy trucker caps or pointy TV-show NYPD hats. By the end of 2011, all 6,000 officers will have undergone the €11 million style makeover. The last department to go blue will be the water police.

Breeder bonus Kindergeld, the monthly child allowance, was increased by €20 to €184 in 2010. On the other hand, Elterngeld (67 percent of your net previous salary paid out while you take time off during the first year of your baby’s life) will drop by an average of €25 per month from next year.

Pay up for roll-ups In October the government decided to punish smokers again with a new law hiking tobacco tax by an average of 6-8 cents per pack per year by 2015. (If you smoke 30 cigarettes a day it could mean an extra €230 a year!) The bad news for addicts on a budget: roll-your-own loose-leaf baccy won’t be exempt from this tax increase, which is supposed to line government coffers by an extra €200 million in 2011 alone.

Ordnung overdose When Prenzlauer Berg introduced parking fees in October, Pankow hired dozens of new Ordnungsamt staff to issue fines. The result: more rude, uniformed protectors of the public order sniffing around for minor infractions, enforcing smoking regulations in bars, shouting at cyclists riding on the sidewalk and just generally causing paranoia and unease among the population. FYI: Pankow’s Ordnungsamt people are out and about from 10:00-18:00 during the week and 10:00-22:00 on weekends.

Transport apology discounts Berlin is finally making up for last year’s S-Bahn chaos, when half the rolling stock was out of order due to lax brake maintenance. On weekends till New Year’s Eve a single ticket is valid as an all-day pass. Other apology bonuses: €15 off or 14 days longer on monthly tickets and two months free for annual pass holders. Almost makes Schwarzfahren pointless.

Flea-ridden While Humana clothing outlets continue to sprout up, the flea markets have been multiplying at an equally astonishing rate: in 2010 new additions include Nowkölln Flowmarkt in Neukölln, Handelsmarkt am Hohenschönhausener Tor and the Flohmarkt at RAW in Friedrichshain. Trendy indoor venues like HBC and Sing Blackbird, to name just a few, followed suit by hosting their own fleas.

Swede deals Lichtenberg, already the hip and sustainable future of Berlin, is now also the site of Berlin’s fourth and largest mega-mart of Scandinavian-designed Chinese-made furniture and homeware. The 21,000 sq. metre IKEA opens December 13. The roof has 4,000 sq. metres of solar cells, reducing the store’s CO2 emissions by 1,270 tonnes per year, the equivalent of 165 cars. It’s just too bad the car park holds 1,600.

Multikulti not dead After two years off the air, Berlin’s first source for world music has risen from the dead with its name changed from Multikulti to multicult.fm. The frequencies 88.4 Mhz and 90.7 Mhz cover all of Berlin’s needs for everything from tribal drums to Vatican masses.

Beeb bump-up and bump-back-down For all of you World Have Your Say and royalty news addicts: the BBC World Service frequency switches to 94.8 FM starting December 1. Apparently, it’s a cost-saving measure. A contract leftover from the Cold War guarantees each of the Western occupying forces their own frequency in Berlin, the other two being American NPR (104.1 FM) that took over from Voice of America, and before that AFN and the French RFI (106 FM). Too bad the contract didn’t allot the money to guarantee those frequencies enough adequate funding.

Water fight! The price per cubic metre of water actually dropped from €2.038 in 2009 to €2.027 this year. It was indeed a welcome discount in a summer when global warming showed its teeth with temperatures around 40 degrees Celsius. Don’t get too excited though; we’re looking at savings of a few cents per month.

Germany loses the World Cup Ok, they lost in the semi-finals against Spain, but summer 2010 really felt like back in 2006 – with the whole city at a standstill every time the Mannschaft played. Berliners were glued to improvised screens in every Hof, café, shop, waiting room and office. Every German victory resulted in throngs of flag-waving youths blocking major intersections. Imagine if they’d actually won.

Rebuild the Palast der Republik! Budget cuts mean that the construction of the €552 million Humboldt-Forum (read: lame-ass fake Stadtschloss) is put on hold for at least three years – enough time for politicians to come to their senses and send the baroque palace where it belongs: the Prussian scrapheap. Why not just rebuild the Commie Palast instead?

EXBERLINER.com reborn Ok, our old site had a glitchy, edgy underground Berlin feel to it, but it looked as if it should have disappeared with the Wall. Our new slick site launched in March with the city’s best original-version film search, event calendar, daily blogs and classifieds. Readers like it: visits are up 70 percent. In the words of the German-dubbed Mr. Burns: ausgezeichnet.