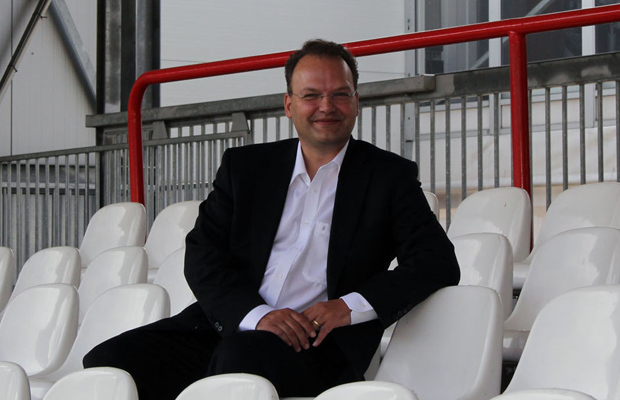 When I arrived at the Alte Försterei on Wednesday morning, the mood was serious. The press conference had been moved from the usual Portakabin / media centre, to the hallowed confines of the VIP section, whose sanctity I have never been fit enough to breach before. There were plenty of cameras there, all ready for the upcoming announcement. Who was going to be the successor to Christian Beeck, FC Union’s six year serving sporting director who, it had been announced on Tuesday, was leaving the club?

There are rumours that his working relationship with Union had become untenable for a while now. They no longer saw eye to eye. Everything had become a drama, and everything had fallen apart by the end of the season. But for a club like Union, it can be difficult to let  go. They see themselves (and, more importantly, the fans see the club) as a family that extends all the way from Dirk Zingler, the chairman, down to the youngest fan. They are one and the same. Zingler understands this; he is cut from the same cloth. But such a decision is still a bit of a gamble.

This was big news. Massive. On Tuesday alone the Union message forum hit over 30,000 views for the topic with the deposed’s name as it’s title. So it was with a little trepidation that I entered the VIP sector. This is the 21st Century after all.

The pressure was on who would get the first tweet out there with the new guys name on it. Who could get the scoop? It reminds me of a bit in the excellent book by David Millar where he recalls being the Moscow correspondent for Reuters. He knew that a senior Soviet politician had died, but – along with everybody else – had to wait for the official announcement. He had a sheet typed up with all but the man’s name on it ready to hit the wires. The prestige of getting in first by a second would be huge enough, he just needed the name.

I don’t know who broke the Tweet barrier. In the end, I was more interested in if the guy was going to be sat there at the end of the room under a sheet, before having it whisked off like at a car launch. Needless to say, this didn’t happen. Zingler entered the room with press chief Christian Arbeit and a small, smart looking chap in Westerwelle glasses. It was Nico Shäfer, the former business manager at Rot-Weiss Essen. He looked business, whereas Beeck was obviously a former footballer. Schäfer’s presence was underwhelming and not alpha male. His hair was sensible, his suit pristine

But then it became clear why. He is a businessman. Zingler explained that this is the model that Union needed to follow. Beeck was good, he said, but times have changed and the sporting side of things was already looked after by the Coach, Uwe Neuhaus, and his staff. What they needed was a new man to deal with negotiations, with sponsors, with agents. It was said again and again. He is a Kaufmann. A businessman with three degrees (a term not often heard in football since Ron Atkinson’s days at West Brom in the 1970s when he had three black players in the team).

So that was that. An Eisern favourite has gone and people are now wondering about the new man, and how he will fit in – but also about this brave new world that Zingler was talking about. Union fans don’t subscribe to business ideas usually. It may take them a bit of time to come around, but if Schäfer can deliver the financial plans for the rebuilding of a team that has just shed eight players, and move the club forwards to a position where they are not just worried about when the next relegation will come, it should work out just fine.

He will also need to need to sharpen his tackles for the winter “Legends” Hallenfußball tournaments. It was there that Beeck still roared into challenges like he did 20 years ago. This is why the fans, mostly, still adore him. He was one of them.