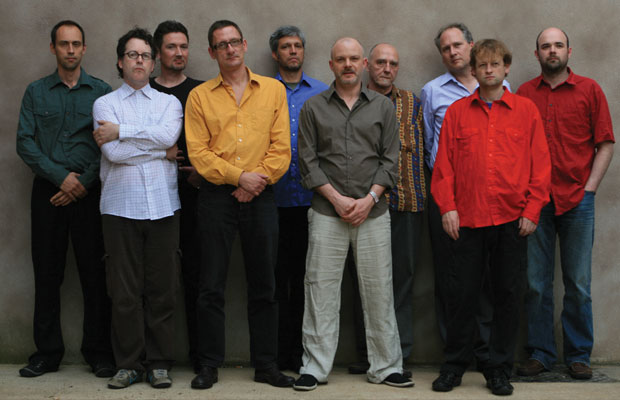 Pianist Reinhold Friedl founded the 11-piece avant-garde ensemble Zeitkratzer in 1997. Including the great improvisational trombonist Frank Gratkowski and minimal electronic composer Marc “Rechenzentrum” Weiser, and light/sound designers among musicians of a more traditional orientation, they tend to concentrate on “new music”, with CD releases covering the work of John Cage, James Tenney and others of that ilk.

But they’ve made their name venturing far afield, with interpretations of industrial pioneers Whitehouse with Whitehouse progenitor William Bennett, and a performance and recording of Lou Reed’s Metal Machine Music (with Reed himself on guitar), a work previously thought irreproducible. Long associated with the Volksbühne, this summer they’ll be playing their “Volksmusik” at Haus der Kulturen der Welt‘s open-air Wassermusik Festival.

The theme for this year’s festival is “great rivers’’ – the Amazon, the Nile and the Danube. What’s the plan for the Zeitkratzer performance?

For Wassermusik, we are playing our “Volksmusik” program from 2007, which was based on folk music from along the Danube. I did it together with the drummer from Zeitkratzer, Maurice de Martin, who’s a really crazy musician. He lived in Romania and played in wedding bands – he’s really a jazz and contemporary musician, so he knows a lot about the rhythmical aspects of music. We went to the archives and listened to a lot of CDs, and he transcribed the rhythmical patterns.

The piece was based on the water in the Danube; we made three years ago, but we are still playing it. We aren’t like a pop or rock band – releasing something and playing it for a few months and then moving on. We treat it more like classical repertoire, which means we play it for years. It’s a 45-minute program, quite aggressive. If we played it in a folk music festival, there would be blood!

How do these pieces generally come together?

The idea was always to be a little bit of a hybrid, in a very American sense – it came from the [Manhattan] downtown scene. On the one hand, I’m the boss. On the other hand, in terms of composing, we do everything differently. I’ve done a few pieces; the others have done a few pieces.

We also play pieces that were written 40 years ago, and invite people to compose for us. And that includes also inviting musicians like Lee Ranaldo from Sonic Youth, who’s not a composer in the writing sense or the classical sense, but knows very well what he wants his music to be like.

And do you feel you fit into today’s contemporary scene?

I would say we ARE today’s contemporary scene! We have chosen very much not to be in this kind of thing. We play contemporary music festivals, but we enjoy mixing. We are playing the jazz festival in Berlin, we play rock festivals – we did one where Peaches played directly after us – so we have this very different context wherever we are playing. That’s good, because it means we are not playing only in this kind of asthmatic classic contemporary context.