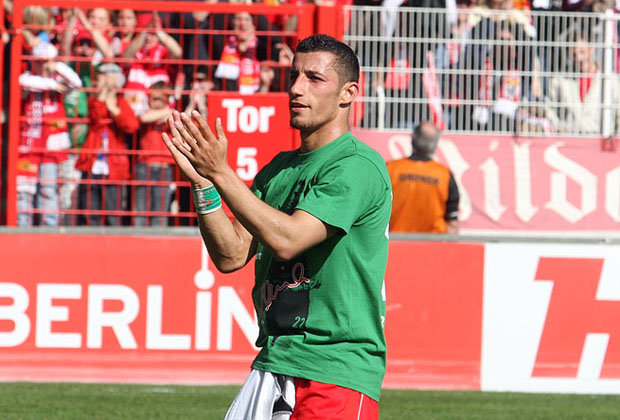 As someone who has spent a large part of their life describing himself as a drummer you’d think that the Sportsdesk’s representative would have a slightly better sense of timing. Last Wednesday as I put the final touches to a piece about Karim Benyamina – and how that it is a funny old game (insert or delete as many Greavsie-isms here as you like) and that he may stick around yet. There was no point predicting his immediate departure, I thought. The deal, as they say, went down that morning. It was announced that Benyamina would not be receiving his new contract.

So at the end of this season Union’s all-time top scorer will leave the club – possibly to Turkey – and his shirt number, 22, will be retired until someone betters his goal tally of 85. It might take a while.

Benyamina is idolised at the Alte Försterei, his goals having seen Union along the journey from the Regionalliga to the, at that time, new third division. Then again from the third to the second – his 2 in the extraordinary game against Paderborn at the Jahn Sportpark that season helped set the tone for winning the league. Also against Paderborn he scored one of the finest volleys your humble reporter has ever seen in the flesh. To say it was Van Basten like in its brilliance would be to do it an injustice. King Karim. Big Ben. He had earned all of those crappy nicknames, and the white boots that did his talking for him. (We at the EXBERLINER Sportsdesk heartily support any initiatives to make players earn their stupid coloured boots. Roberto Baggio was allowed to wear them, Jermaine Pennant is not.)

On Sunday against FSV Frankfurt, he had come on with half an hour to go for the ailing Halil Savran. Union were one-nil up through a preposterous Torsten Mattuschka opener, accepting Patric Klandt’s gift of the ball with a clear sight of the goal in front of him. He finished cleanly. Heads were being scratched. Had that just happened at all? FSV had been superior all day. Marcel Höttecke had made at least three world class parries and Frankfurt contrived to keep missing their chances. Almost 17,000 fans were willing the ball away from the goal, but it kept coming back at them as if on elastic.

With the opener things calmed down a bit. Mattuschka’s passes finally started finding his own team-mates feet, Peitz’s too. FSV had been mugged, and the fans knew it. “Nie mehr dritte liga” was being cheered by the raucous masses behind the goal. The win makes the chances of relegation ever less. They are just one point away from the hallowed yardstick of 50 points and the klassenerhalt, leaving the last FIVE games left to say goodbye to their hero. As an era defining end it isn’t quite Shane Warne in 2007, but it’s close. The new look Union was represented with a rare start for the quick Christopher Quiring – mostly on the right-wing, but constantly swapping flanks with Chinedu Ede – as Uwe Neuhaus looks forward to next year.

All it needed was a happy end. The cumshot, if you don’t mind the crudity. Ahmed Madouni headed a free kick away, it falling to the feet of Benyamina twenty yards inside his own half. He turned and ran straight, monitored constantly by Andreas Dahlen. He had one thing on his mind, but his pace isn’t quite as lightning as it once was. He was edged rightwards away from the beckoning goal and the throngs, this time, trying to suck the ball towards it. Again he pushed the ball forwards. He had given up on the goal, his personal glory would have to wait a little longer – and that tally would stay put for at least a week – so he skipped past the hapless defender and, with an eye on him moving unmarked towards the back post, chipped a perfect cross-back-across goal for John Jairo Mosquera to head home.

The roof almost came off. The tears flowed like the wine at Keith Richards’ Holy Communion. Mosquera was the first man over to Karim, singling him out. At the final whistle Peitz and Madouni got him up on their shoulders, but the little man didn’t look too comfy two meters up and swaying disturbingly. He was happy to don the t-shirt printed in his honour and to do a lap lasting minutes accepting the thanks and the tears. The sweat and the adulation were for him alone, the beers sloshing around the stadium were given up to the klassenerhalt – but that didn’t even seem to matter. A spontaneous eruption of love could not have been better scripted.