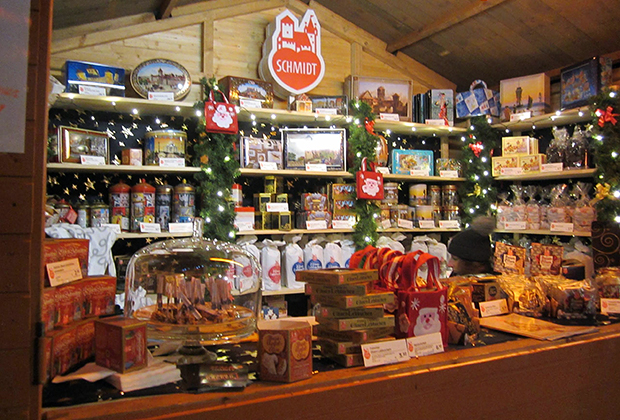 Let’s get this out of the way: I’m a bad Jew. I like my burgers smothered in cheese, my matzo balls wrapped in bacon, and you can pry my shellfish from my cold dead hands.

But I’m still a Jew, and I’m still from a politically correct American town that shall remain nameless here, a place where every year in December a children’s choir gathers around a maple tree in the town square to sing about Kwanzaa and Hannukah and secular winter merriment, plus a handful of Christmas songs that aren’t about Jesus. I don’t even think I wished anyone anything other than “Happy Holidays!” till I was like 18.

All of which is to say: I’m an active soldier in the War On Christmas. So I’m one of the few people who was excited to hear about the inclusive-sounding, angel-free “Wintermarkt” in Kreuzberg, and I got even more furious than my colleague Herr Gris when I read about the resulting backlash.

Listen, I’m well aware that not celebrating Christmas makes me an anomaly in Germany – even in Berlin, where despite 50,000 other Jews plus some 250,000 Muslims the dictatorship of frohe Weihnachten still prevails. I don’t need Gunnar Schupelius from BZ telling me, “If there are actually people in Kreuzberg who suffer from this Weihnachtsrummel every year, why don’t they stay home?” Why? Fuck you, that’s why. I’ll shut up about this soon ’cause I’m only here to write about sandwiches and stuff, but honestly, Gunnar, telling non-Christians they should have a frohe Weihnachten or just stay home is one step away from justifying all those paranoid “are you safe over there?” emails from my parents.

But all of this is moot anyway, because the only thing nondenominational about the Wintermarkt is the name. I stopped by yesterday because I had some time to kill in Kreuzberg 61, and found myself face-to-face with a red-and-white Nürnberger Lebkuchen stand, Elvis’ “Blue Christmas” blaring over the sound system. Barring some falafel and kimchi, the food tended toward the same kind of hearty German fare you’d find at any other Weihnachtsmarkt. The most popular stand was the German-run Imbizan, whose presence in Berlin since 2012 makes it one of the early “gourmet street food” adopters. The only thing they were selling? Pulled pork. So much for latkes and… whatever people eat on Kwanzaa. 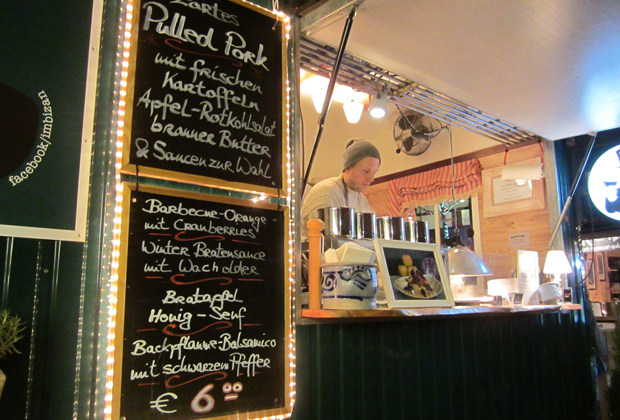 I tried it, of course, after a struggle between my Jew side and my food-blogger side that lasted about a second. And it’s definitely recommendable, worth the €6 they charge for it: hours and hours of slow cooking paid off with some impossibly tender meat, plus a side of crunchy red cabbage and apples, potatoes with caramelised brown butter and a tart cranberry-orange sauce that made me feel a little bit better about having missed Thanksgiving this year.

Tasty as it was, however, it was undeniably Christmassy. So I’ll have to look elsewhere for the kind of food I associate with the season: potato pancakes in the company of middle-aged German BZ readers at the delightfully named Pufferimbiss by Karstadt off Hermannplatz, or, on Christmas Eve, the traditional Chinese meal at Shaniu‘s on the Westside or Wedding’s Asia Deli (blog forthcoming, I hope). Happy winter, everyone!