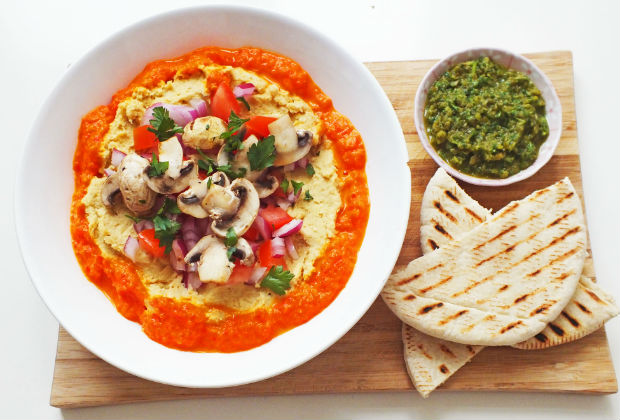 Ah, hummus! A pot of basic hummus, some pitta bread and a simple fresh salad were part of my staple diet as a student. And while German supermarkets do not often stock hummus there is certainly no shortage of it in the plentiful Turkish supermarkets or Berlin’s street food scene. Head out for a Falafel Teller and there will often be a dollop of hummus on the side. But it is Zula Café that serves the real hummus treat! A favourite of mine is the hummus with the goulash but I also love the Sabich – aubergine, hummus and a hard boiled egg all stuffed in fresh pitta bread.

This recipe is my version for having my hummus fix at home. The hummus is at the right consistency to go with the light red pepper sauce and the chopped vegetables and mushrooms are covered in a lemon oil dressing giving it that extra tangy taste.

Juice of half a lemon

For the red pepper sauce:

Juice of half a lemon

For the spicy dip:

Small handful of jalapenos (from a jar)

Juice of half lemon

Griddled pittas to serve on the side

Put the red peppers into an oven dish with a bit of olive oil and place in a pre-heated oven for around 35-40 minutes on a high heat.

For the hummus: Place everything into a blender and mix until it well combined and put to one side until needed.

For the spicy dip: add everything to a blender and whizz until everything is combined.

Heat a large griddle pan and once hot add the mushrooms. Cook on both sides for around 4-5 minutes.

Take the peppers out of the oven and roughly chop. Put into a blender with the rest of the ingredients and blend until it is a smooth sauce.

Serve with some the spicy dip and some griddled pittas on the side.

For more great recipes check out A Modern Rose website!