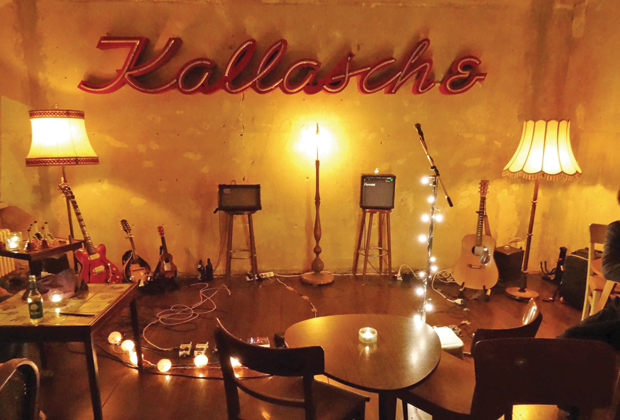 Okay, sure, Kallasch& (whose name comes from the red sign on the back wall, scavenged from a nearby abandoned restaurant supply store called Kallasch & Jonas) boasts some signifiers you might recognise from Weserstraße: stripped walls, mismatched furniture, back-room concerts.

But stick around and you’ll notice that a) everyone actually listens when someone’s playing; and b) you might even end up talking to someone you didn’t come in with. This is Moabit, after all, where despite a recent spate of rent increases, the streets remain quiet and the populace “down-to-earth”, as co-owner and barwoman Luisa Traumann puts it.

Starting with a crumbling Eckkneipe, she and fellow Moabiter Dominik Borrmann, later joined by third co-owner Simon Ebser, planned and renovated tirelessly, from the bar’s inception in October right up to its official opening in July and the whole place still buzzes with a scrappy “can you believe they’re letting us get away with this?” energy.

While the weather still allows, sip a Berliner Bären-Bräu (€2.50) on the outdoor patio while watching the sun set over the former train station that now houses the ZK/U art centre. Then head inside for music, probably played by a folky veteran of Borrmann’s three-year-old Musique Maudite concert series, and one of Berlin’s better Mexikaner shots (€1).