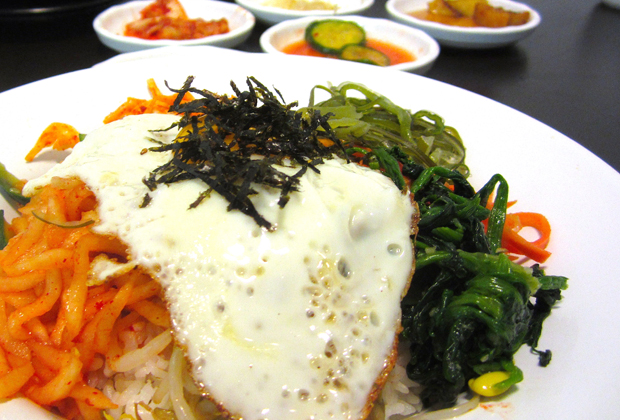 UPDATE: Arirang 2 has closed, but you can still find branches of the restaurant in Friedrichshain and Charlottenburg.

Don’t let the paucity of gochujang in this year’s food issue fool you: now is not at all a bad time to be a Korean food lover in Berlin. Fraülein Kimchi, Mr. Susan and Son Kitchen have all carved out comfortable niches in the street food scene (involving but not limited to ramen burgers, locally slaughtered meat and saying “fuck” a lot, respectively). Just this past Friday, Platoon Kunsthalle resumed its Pojangmacha series, a monthly attempt to replicate Korean drinking culture via beer, barbecue and soju shots; one day later, laid-back Tempelhof Imbiss Mmaah opened an indoor wintertime location, serving €5 bulgogi, mandu and fruit teas to ravenous Trepköllners.

But I’m not here to talk about any of that. I’m here to tell you to go to Kreuzberg 36, near Görlitzer Bahnhof, and pay homage to the restaurant that started it all: Arirang.

Yes, there is now an Arirang in Kreuzberg. About two months ago, a satellite branch of the much-beloved Korean dive (historically of Wedding, recently relocated to Charlottenburg) opened on Reichenberger Straße with no prior announcement or fanfare, like the restaurant equivalent of Beyonce’s self-titled album. Unlike the Beyonce album, Arirang 2 has remained un-hyped. Also, it has inspired zero internet think-pieces about feminism.

Time for that to change. (Not the feminism part.) Arirang 2 isn’t doing anything particularly groundbreaking – the menu’s basically a smaller selection of Arirang 1’s competently executed Korean classics, and if you’re a fan of creative fusion dishes, local/organic ingredients or remotely flattering lighting, you’d best go elsewhere. If, however, you want to guzzle Hite beer and consume indecent quantities of grilled meat in what looks like an AA meeting room, this is your place.

Despite its low profile, the restaurant’s already drawing a crowd of Kreuzbergers in the know, Korean and otherwise. I saw plenty of barbecue grills on plenty of happy tables, laden with everything from beef to squid to duck (€20/2 people). But I was drawn to the soondubu jigae, spicy silken tofu stew with seafood, some vegetables and an egg in it. It’s one of my favourite forms of winter sustenance, not least because it comes to the table burbling away like molten lava in its stone cauldron. Arirang’s version is more or less spot-on, with a rich, fishy broth and meltingly soft tofu; the bits of shrimp, octopus, squid and clam are there more for texture than flavour, but what do you expect for €7.50?

They’ve also got the obligatory bibimbap, a giant bowl of rice heaped high with home-marinated vegetables (in this case cabbage, spinach, sprouts, zucchini, carrots and radish), optional beef and an egg on top. This, unbelievably, is only €5.50 all day Monday through Friday; I’m not sure how long that deal will last, but if you’re not a stickler for the stone-pot version (€8.50) you really should take advantage of it ASAP. Like everything served here, it comes with a complement of free banchan, those little fermented side dishes: syrupy glazed potatoes, two kinds of bean sprouts, cucumbers and a respectable house kimchi.

Speaking of kimchi: in case you haven’t figured this out, everything at Arirang 2 is less expensive and yes, likely better than at nearby Kimchi Princess, down to the addictive plum and ginger honey-fruit teas (€1.50 here; €3 down the road). You now have absolutely no reason to go to that other restaurant anymore, unless your secret fetish is to dine surrounded by tourists who want to feel like they’re at an “Oberlin parents’ weekend”. There’s finally well-prepared, authentic, cheap-as-fuck Korean food in Berlin’s southeastern quadrant. Now make up for lost time and start eating it.