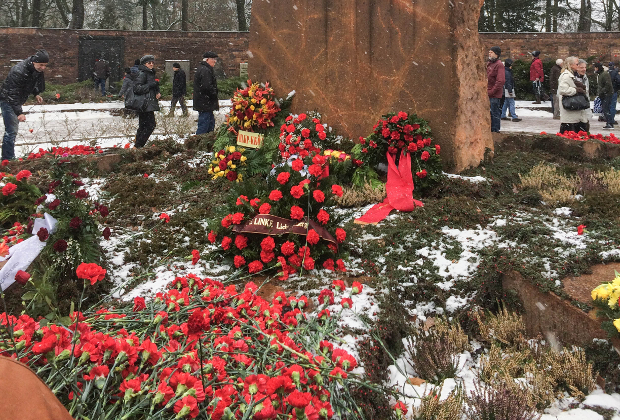 A Rosa Luxemburg fan spent Sunday in Friedrichsfelde among East German nostalgists and Marxists of all feathers, commemorating the 98th anniversary of the deaths of Luxemburg and comrade-in-arms Karl Liebknecht in a cacophony of red banners, red carnations… and bratwurst.

Any good Berlin communist knows the date by heart: January 15 was the day Rosa Luxemburg was arrested, brought to the Hotel Eden in Budapester Straße, shot in the neck and thrown in the Landwehr Canal (the official report would read “lynched by an infuriated crowd.”). It was 1919. With her dead body, Germany’s ruling Social Democrats were ridding themselves of the imminent threat of a workers’ revolution.

Every year on the second Sunday of January, a few thousand communists of all feathers gather around the Luxemburg-Liebknecht Memorial at the Central Cemetery in Friedrichsfelde where the communist heroine, one of the only leading females in the allegedly gender-egalitarian movement, was buried six months after her assassination. Or not: her body was only fished out of the canal after weeks, and there are still doubts about the identity of the corpse in the grave.

It was freezing under the wet snow, but all the same, some 3500 made the trek yesterday for the 98th anniversary of Rosa’s death, from Die Linke (the official successor to the East German SED) to rival KPD movements and myriad splinter groups – Maoists, Leninists, Trotskyists – you never knew existed. Youngsters, including the youth faction of the MLPD (Marxist Leninist Party of Germany) held red banners bearing the faces of Marx, Engels and Lenin, along with Mao and… Stalin. Older people came empty-handed (if not for a red carnation), there to express nostalgia for the country they lost when the Wall came down. One woman who spent what she calls the “best” 40 years of her life in East Berlin says she misses the solidarity and fraternity from back then.

Ideologists or nostalgists, they seem to all share one major peeve – the feeling that the current Germany doesn’t represent them, and that its media is lying about the true nature of political systems they miss and long for. The MLPD was gathering signatures to get into the parliament, and a member complained about mainstream propaganda against Stalin: “It was not as bad as the capitalist press try to tell you now.” Speaking of post-truth politics and Lügenpresse… An older woman interjected they should be ashamed to mix Stalinism with Socialism. “The SED never killed their people.”

And suddenly one was reminded that being a communist in Germany, less than 30 years after the fall of the Wall, still takes on a very special and easily suspicious meaning. Members of Die Linke and the German left are still debating East Germany’s legacy, and are still often attacked for their complicit silences about the regime’s political crimes. Outside the cemetery across from the Luxemburg-Liebknecht Memorial, a humble stone commemorates the victims of Stalinism. The scene of ritual fights, it was protected by police and a few volunteer security officers.

Kurdish communists of the PKK were there to bring you back to current reality – the release of political prisoners in Turkey, chief of all their historic leader Öcalan. But it was weird how disconnected to current issues everyone else was. A very nostalgic assembly indeed.

Meanwhile, a long queue of pilgrims waited to lay a red carnation onto Rosa’s monumental gravestone in a well-rehearsed rotating flow (Deutsche Ordnung muss sein!). Maybe, like me, they were celebrating the memory of the uncompromising pacifist and fearless rebel against the established order, or maybe they were mourning the workers’ revolution that the Spartakists came so very close to accomplishing in Germany back in 1919.

Outside the cemetery, those who’d marched the entire way from Frankfurter Tor to Friedrichsfelde warmed up at food stalls selling pea soup, bratwurst and Glühwhein. Others browsed the Marxist paraphernalia on offer, from red literature to music boxes that played “The International” anthem. Vietnamese sellers were making good business off of vegetarian noodles and flowers: €1 a carnation. Che and Lenin t-shirts and Marx/Engels hoodies were ubiquitous, but there was no trace of Red Rosa. A Die Linke volunteer told me I could get a Rosa Lux button on their online shop. Never has class-conscious consumerism seemed so accessible!