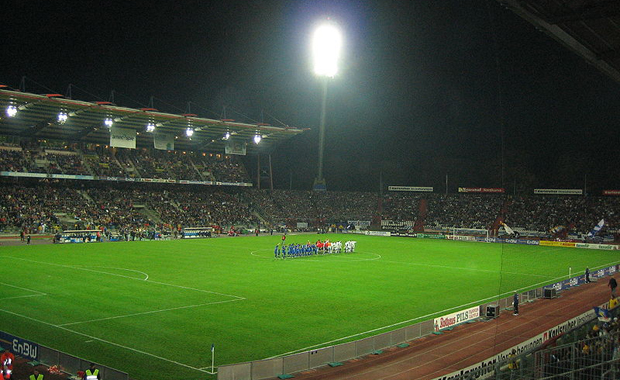 We English-speaking football fans don’t really understand how friendship and football fit together. All teams bar our own are treated with the same aloof disdain of the kind that we reserve for interaction with a partner’s ex-lover. Any proximity can only be a bad thing.

Maybe it’s down to loyalty, or maybe it’s due to simply not knowing how to react when a team that is supposed to be your friend hands you down a right royal thumping. Over here, though, things are different. Hertha and Karlsruhe have been pals since the 1970s, and perform elaborate choreographies in the stadium every time they meet, chant each other’s songs and occasionally travel to support the other’s team against mutual enemies.

The love-in continues regardless of events on the pitch. Hertha’s 6-2 demolition of their dear friends on Sunday isn’t without precedent. Two years ago, the Berliners were on the wrong end of a 4-0 hammering when a win would have sealed their place in the monetary free-for-all that is the Champions League. Instead, Hertha lost three of their best players that summer, and slumped to pathetic relegation the following year. Revenge probably isn’t the right word for today’s result, but the Hertha players involved in both games must have felt a small amount of smug satisfaction, even if they could never express it to their fans.

“I’ve rarely seen two such different halves“, lamented KSC coach Uwe Rapolder after the game. At half-time, KSC were leading 1-0 thanks to a deflected free-kick, and looking good. Then, almost immediately after the break, Raffael slalomed through the entire Karlsruhe defence after a clumsy one-two with Ramos, and the scores were level.

Patrick Ebert came off the bench for his first appearance since May 2010, and, with his first and second touches, controlled Ramos’s excellent through ball, and released one of his own to Raffael in the box. Now 2-1 and Ebert punched the ground in celebration of a marvelous, ruthless goal on the break. His teammates ran to him, rather than to Raffael, to celebrate. Perhaps, after making way for Ebert and with a little extra competition for his spot on the flank, Nikita Rukavytysa will be forced to work upon his flighty, unreliable ways.

Ebert wasn’t the only player making an impressive comeback. Pierre-Michel Lasogga’s layoff had only lasted three weeks, and was therefore perhaps less deserving of an explosive return. His contribution was, as always, characterised by tireless energy and, although he failed to get on the scoresheet, his two assists were of the highest quality – the first, a perfectly measured through ball after another blistering counter-attack; the second again cutting the defence in half with a low cross across the box to Ramos. Lasogga seems to be shaping into that rare breed of striker – an unfailing eye for goal, combined with selflessness and teamwork. It is imperative that he stays at Hertha, regardless of what bigger teams are sniffing around.

KSC had no response to Hertha’s counter-attacking game, and less so to Raffael’s invention and intelligent running. Compared to the player who arrived from Zurich in 2008, this one is barely recognisable. The flair and touch that he displayed sporadically back then are now mostly the default setting, complimented by determination, a fighting spirit and teamwork. Fears that he would be too slight for the physical rough-and-tumble of the 2. Bundesliga have been proven spectacularly unfounded, as Markus Babbel tends to deploy him in a position deeper than in previous seasons, right in the midfield battle. Despite being entirely anonymous in the derby against Union last week, he’s scored five in three games. Adding consistency to his repertoire of tricks must be the next target.

It may be churlish to pick out negatives, but one is clear – Hertha haven’t kept a clean sheet in six games, and goalkeeper Maikel Aerts was again less than impressive. The last three goals conceded have been direct from free-kicks, indicating a lack of concentration and ability to organise his defence from the Dutchman. Hertha may well continue to get away with such lapses in the 2.Bundesliga, but the ever-more realistic target of the Bundesliga will not be as forgiving.