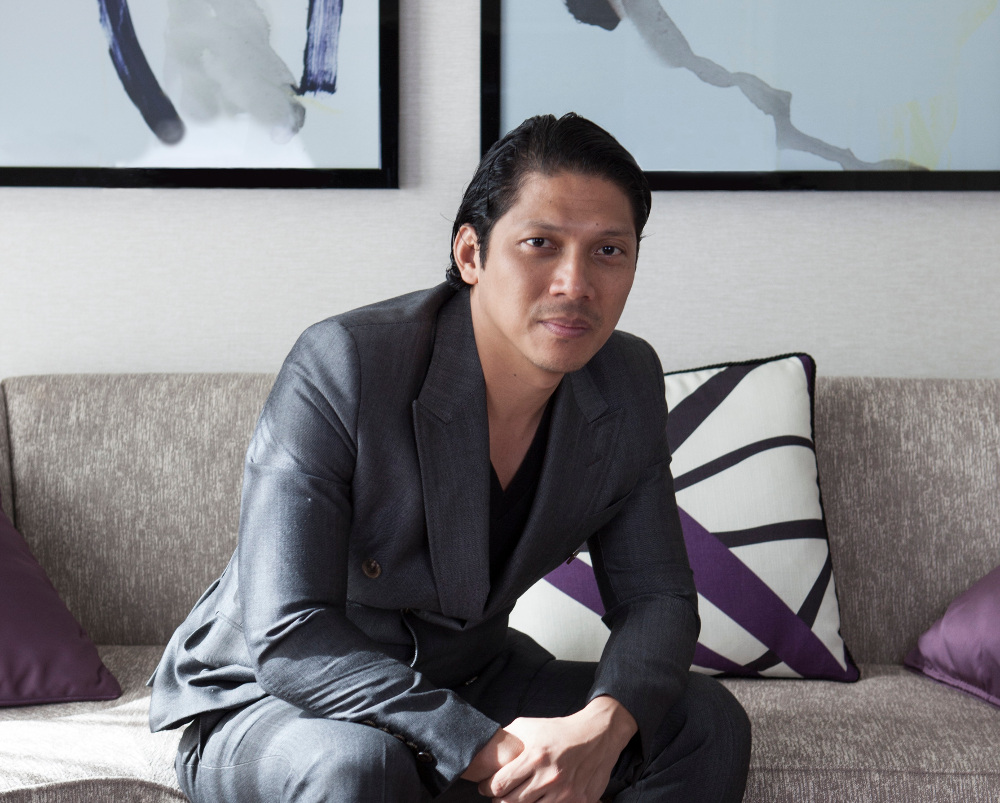 Berlin had the Plattenbau, the GDR prefab concrete boxes. Now billionaire entrepreneur Robbie Antonio is offering to bring 21st-century prefab to the city. Meet the man who wants to revolutionise real estate with posh, affordable buildings by starchitects.

Berlin must feel quite provincial – a lethargic and sparsely populated city – to a man like Manila-born Robbie Antonio, a jet-setting real-estate exec used to travelling fast and thinking global. When he spends more than a day somewhere, he knows exactly who to meet: mostly celeb architects, artists, and collectors whom he refers to by their first names – like the Berliners “Olafur” (Eliasson) or “Christian” (Boros), with whom he shares a passion for collecting contemporary art. Stanford-educated, the son of one of the Philippines’ richest men also claims entrepreneurial successes of his own with Revolution Precrafted, the country’s first unicorn start-up that captured the deep pockets of venture capitalists with an ambitious pitch: a brave new world where the middle classes will be housed in affordable designer homes, and the museums prefabricated by starchitects. So far, Asia and Dubai have been his prime markets, but Antonio wants to expand in Europe. During a stop-over in June, we caught him in his Ritz-Carlton suite between a unicorn gathering at the Europa-Center and a business dinner at Grill Royal…

What is a man like you doing in Germany’s capital?

The main reason I went to Berlin is to speak at the NOAH Tech Conference. I took advantage of the chance to meet businessmen and developers to expand Revolution’s reach around the world, and see works of renowned architects, artists and designers.

Any plans to bring Pre-crafted Revolution’s know-how to this city?

We are keen on building micro-apartments and student housing units to address the need for small residential properties, but I also want to do hotels and low-rise residential towers in Berlin.

Berlin is a design and architectural wonderland. I love it.”

We see the need for student and university homes in Berlin, which are the hottest trend in the German real estate market right now. We are eyeing a project that will feature high-design and high-quality student houses and are talking to one of the biggest developers in Berlin for a collaboration. I also want to erect our prefab museums in the city.

Prefab museums in Berlin – can you elaborate?

I would love to build more museums from our product portfolio and  Berlin would be perfect for that. We have museums from Pritzker- winning architects Jean Nouvel, Tange Associates, Philip Johnson Alan Ritchie Architects and Christian de Portzamparc.

In Berlin you’re acquainted with Olafur Eliasson and are just back from a meeting with Christian Boros. Have you seen his famous collection?

For sure, they invited me to visit their collection. I am fascinated by Christian and Karen Boros’ minds and their philosophy in life and art. It’s incredible to think they live on top of a Nazi-era bunker, one of the most controversial homes in Europe.

What else made an impression on you here?

The Jewish Museum by Daniel Libeskind impresses me. The museum not only features fascinating design and style but also interprets the history of Germans and Jews.

Building traditional homes can take years. With Revolution, luxury homes can be delivered to anywhere and built within 60 to 90 days.

Like the Boros’ collection, it exhibits the social, political and cultural history of Germany and Europe. Berlin is a design and architectural wonderland. I love it.

You say your company is about revolution and disruption, how so?

We address real estate pain points by supplying collectible and transportable designer prefabricated homes, pavilions, museums and other structures at a reasonable price. We simplify the process of owning a home.

Prefab usually refers to buildings that are cheap and generic looking, but your market is luxury, unique homes. How do you reconcile this apparent paradox?

We want to democratise the luxury market. I believe that designer homes are not only for elite people. We unite over 80 world-renowned architects, designers and artists who took the challenge of building and designing homes that are accessible to the mid-market.

When you say “democratise”, what do you mean exactly? What’s the price range for a residential design?

We have the Basics Residential Collection that features various customisable units, which range from $10,000 to $94,000. Our cheapest design is the residential crib and the most extravagant ones are, for example, Matilda by Studio Fuksas (above), or the $367,000 Eden by Marcel Wanders.

Why should someone opt for a prefab if they can afford one made of solid bricks and mortar?

Building traditional homes can take years, with weather contributing to time constraints. Building in hard-to-reach locations also adds to higher delivery costs and accommodation expenses for the construction workers. With Revolution, you can choose luxury homes designed by top architects that can be delivered anywhere in the world and built within 60 to 90 days. It’s a faster, efficient and a more affordable approach. It is a better way of building.

No, because it is with the same structure and integrity as a brick and mortar home. The good thing is that it is modular so you can always extend and move it. Upon delivery, you can move in after a week.

So do you see prefab as the future of housing?

Prefabricated structures are gaining more and more popularity and interest. Since our inception in December 2015, we have clinched over $7.6 billion in projects around the world and 35,000 units of homes, hotels and villas in 19 countries, including United Arab Emirates, Myanmar, Japan, Ecuador, Puerto Rico, Trinidad, Guyana, Jamaica, the Bahamas and Bahrain.

My only rule is that each of our structures must be between 25 and 500sqm and can be offered at an affordable price.

And we keep receiving a lot of inquiries from different places such as South America, North America, Africa and Europe. My goal is to reach 25 countries this year; 85 countries by 2020.

What about Europe, is it a difficult market to crack?

We have already closed deals in Cyprus and Spain and are working on projects in Portugal, Finland and Germany. Europe does not have land as vast as Asia and the Middle East – most of the cities are built up already so we have to go to the outskirts.

What kind of guidelines do you give those 80 architects that work with you?

Our architects are revolutionaries, people who have worked for multi-billion dollar projects. With Revolution, they are free to design whatever comes to their mind. My only rule is that the structure should be between 25 and 500sqm and can be offered in an affordable manner. This challenges them, making designer homes for a fraction of cost as they are used to designing sky-high priced structures. One of my favourite architects who designed a pavilion for us is Zaha Hadid, the first woman to receive the Pritzker.

Why involve celebrities such as Lenny Kravitz?

We collaborate with celebrities not only because they are famous, but also influential. They have an eye for art and design. Lenny Kravitz is not just an actor and musician – he is also a brilliant designer. Over the years, I’ve also worked with big interior design brands such as Versace, Missoni Home and Philippe Starck or, more recently, Armani Casa for Tower Projects.

Why did you ask Dutch celebrity architect Rem Koolhaas to design your $15 million Manila home?

I met Rem in New York seven or eight years ago. He is one of the most intellectual architects I have met in my life.

The house also boasts a room by Marina Abramovic – can you tell us more about it?

It’s called Chamber of Stillness, which is supposed to pacify people who suffer from restlessness or impatience.

I have been a passionate art collector for years… It started over a decade ago with an Andy Warhol camouflage print.

If you know a little bit about me, you might expect that I have never used it at all.

I have been a passionate art collector for years. I have seen lots of artworks and I try to collect great modern and contemporary art. Art has inspired me. It started over a decade ago with an Andy Warhol camouflage print. I always go to art fairs, auctions, art galleries. I learn very quickly. Now I am trying to learn more about the old masters.

Can you name a few of your favourite pieces?

There are quite a few including including Warhol and Basquiat. Damien Hirst’s Hymn, Francis Bacon’s Triptychs and I also love Jeff Koons’ Lobster are also among my favourites . Recently I bought an Anselm Kiefer.

What would your dream purchase be?

A Rubens or El Greco.

You collect portraits of yourself by worldclass artists such as Julian Schnabel and David Salle. Can you tell us more about this collection? What’s the idea behind it – selfies of the 21st century?

Yes, it was an idea that I took to an extreme. People are sometimes surprised to hear that I collect my own portraits, but focusing on oneself is also a way to improve. I’m always in pursuit of perfection. In my world there is no room for mediocrity.

Do you have a favourite portrait?

I love the portraits created by Damien Hirst, Takashi Murakami and Zhang Yan.

Your father, Century Properties founder Jose E.B. Antonio, is one of your country’s richest men. How does it feel to be the son of such a successful businessman?

It is both a chance and a challenge. I have always been an independent person and my dad has always been very supportive. I am grateful to have grown up in an environment where I am exposed to the real estate industry, which is how my love for the sector flourished. I also took it as an inspiration to innovate, to be a pioneer and start my own company. Today I feel like a self-made entrepreneur disrupting the old industries.

You designed Manila’s Trump Tower – and are close with one of the President’s sons, Eric, as well as Paris Hilton – whose Manila Beach Club you built. Who would you like to meet or work with next?

I have been in Brad Pitt’s house and we talked about design and architecture. I would love to work with him.

First thing you do in the morning? Check my Blackberry around 4 am.

What qualities do you value/loathe most in other people? Loyalty. I don’t like sloth and mediocrity.

What do you bring to a desert island? My Blackberry, power bank and wi-fi. So that I can get updates from my team.

Describe your worst nightmare. Being stuck in the middle of the ocean or inside a burning house.

What’s worse – dying by fire or water? Fire. It’s more painful – and your body can’t be recognised, leaving no mark on planet Earth.

Write your epitaph. This man revolutionised people’s lives by giving them the opportunity to own a home of their dreams.

Founded in 2015, Antonio’s start-up Revolution Precrafted specialises in modular prefabricated buildings developed in collaboration with internationally renowned architects and designers. In a departure from traditional prefab homes – cheap, mass-produced, often generic-looking housing – they offer high-end dwellings (starting at $10,000) that can be “delivered to your doorstep” in a matter of months. Also currently on the catalogue are four predesigned art museums that can be built in as little as six months to one year and cost under $1 million. Fifty miles outside of Manila, the company is currently building an entire town with 600 homes to be finished by 2020. All in all, they claim to be in the process of delivering 35,000 prefab homes and hotels worldwide. In October 2017 the venture reached an estimated value of over one billion US dollars, making it the Philippines’ first unicorn start-up. To date, Revolution Precrafted has made deals worth over $7.6 billion.