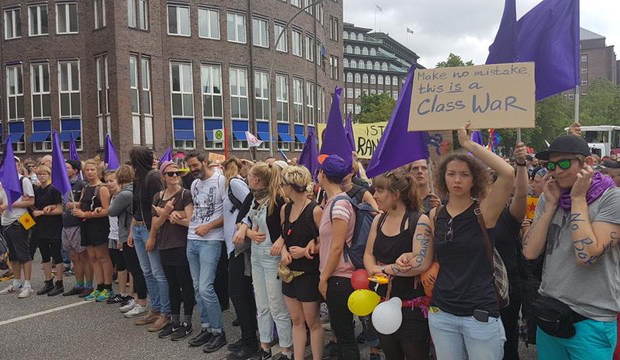 Am I a terrorist? I never thought of myself as a terrorist. Sure, I’m not a big fan of the capitalist system, but most of my political activity involves writing. The only time I ever even held a gun was when I was eight years old at summer camp.

But apparently, I am a terrorist. And a Nazi. And a jihadist. Or like one. At least according to Germany’s interior minister, Thomas de Maizére of the CDU. He compared protesters against the G20 in Hamburg to “neo-Nazis and Islamist terrorists”. Confused? So am I. How can I be both?

Let me start at the beginning. I went to Hamburg last week to protest against the G20 summit. I am on record as not being a fan of Donald Trump. Or of Recep Tayyip Erdogan, Vladimir Putin, Angela Merkel… or any of their friends. So why not take the chance to protest against all of them at once? Twenty birds with one stone, so to speak.

When my train pulled into Hamburg on Thursday, the streets were empty of cars. The 38sq. km of the “Blue Zone” were like a ghost city, at least in terms of civilian traffic. Police vans screeched through the streets and helicopters circled overhead. But just a few miles away, an army of riot police were attacking 10,000 people who had gathered for an anticapitalist demonstration under the strange motto “Welcome To Hell”. What provoked the police violence? Apparently a few hundred people at this completely legal demonstration were wearing black masks. I guess this justified injuring hundreds of people, some of them seriously.

By the way: What were the police wearing? Black masks.

The violence only got worse. On Friday night, I walked through the Schanzenviertel, Hamburg’s equivalent of Kreuzberg 36, just before nightfall. Among the thousands of young people partying and drinking, there were robocops at every corner, posing ominously next to their water cannon tanks. Why?

If I were the police and I wanted to provoke a riot, this is just what I’d do: Wait for the beer to flow and darkness to fall. Then shove a passerby or two. Shoot someone with the water cannon. Keep going until the first bottles fly. And if they don’t, just get one of the hundreds of undercover police to get the ball rolling. Escalate, escalate, escalate. This setup led to a full-blown riot. But mysteriously, right at this point the police withdrew from the neighborhood. They waited outside for several hours as supermarkets were plundered and barricades burned. It seemed like they were burning inside for confirmation of riotous lefties.

My theory: The police had lost face on Thursday. Most mainstream reporters, including state-sponsored media, agreed that the police were entirely to blame for the violence. So the cops needed some “proof” that they were dealing with very dangerous people. Thus the orchestrated eruption on Friday night.

The real story here: On Saturday, almost 100,000 people went onto the streets against the G20. It was almost totally peaceful. But try to find reports about that in a German newspaper. It’s just riots, riots, riots… Crazy.

On Sunday morning, I tried to get home to Berlin by bus. Eight busses with 300 people were stopped on the highway by Berlin police. They wrote down our personal information and searched through every single belonging. It took five hours!

So, because the cops instigated a riot and I took part in a peaceful protest, I guess am a terrorist. Erdogan must be impressed: Germany is taking steps in Turkey’s direction. Anyone the interior minister doesn’t like can be called a “terrorist” and detained – maybe not thrown in jail, but harassed by the police. Just because. I’ve been protesting against these summits for a long time and I’m not going to stop now. Whatever they call me.