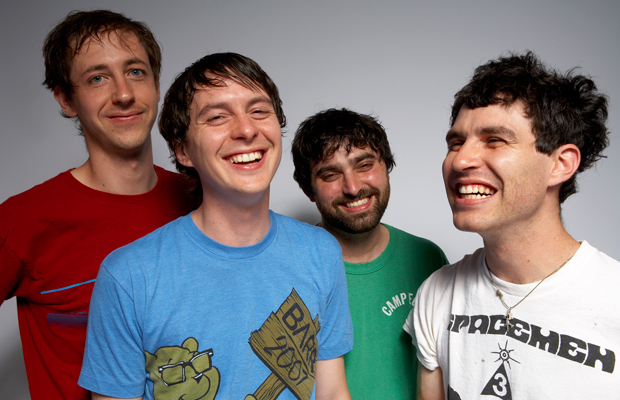 Originally hailing from Baltimore, underwater hipster whisperers Animal Collective are the Godfathers of chillwave, and can lay legitimate claim to being the most influential rock band of the last decade.

Multi-instrumentalist Josh Dibb aka Deakin was absent from 2009’s Pitchfork dominating Merriweather Post Pavilion (Domino), but he’s back with the band, who will be playing Astra on Friday, May 20 as part of the three-day Melt! Klub Weekender. Check out our interview with Planningtorock as part of our Melt! Kub Weekender package.

You sat out Merriweather.

Definitely. I think that was probably a very different experience for us than for the fans. We recorded [2007’s] Strawberry Jam (Domino), and at that moment I didn’t want to jump back into it – I was dealing with a lot of stuff. Everybody else had a lot of energy to push into writing new music. I needed a break; those dudes wanted to keep doing stuff.

Which turned into something of a public breakthrough.

We’re really in-the-moment people. At the time, we didn’t really think about how serious it would be, what would happen with those songs. If something was created with specific band members and their instruments, that’s how it should stay until it runs its natural course. Some of those things last a few months, in the case of Merriweather, it lasted, you know, two-and-a-half years. We honor the eras that we go through. None of us ever questioned that we would play music together again.

There are rumors of new material.

We haven’t made any concrete plans to be in the studio or anything – we’ve been talking about it and it’s something we want to happen sooner rather than later. We’ve traditionally been a band that’s always written new material and played it live and then recorded it later. There’s a few songs here and there that didn’t get written until we were in the studio but, generally, we like to try stuff out live.

So far the new stuff is just a live thing. We just came back from a West Coast tour which was super fun and really, really great. But having just come off of Merriweather Post Pavilion and with people really wanting that, we come on and we play, you know, ten new songs and maybe two songs off of Merriweather. For some people that’s really exciting, and for others it can be alienating. We’re fine with that on some level, but we’re gonna be playing this new stuff for the next couple tours.

Has your return lead to a different musical direction?

Merriweather was such a sample-based record and the mentality that went into that, we all got really psyched about coming back to more of a raw, live…just playing. [Percussionist] Noah [Lennox, aka Panda Bear] is playing a full kit, well, a strange full kit. He’s actually playing drums again. I feel like a lot of the stuff we interview about, before we get into writing songs or recording, just ends up getting taken too literally. Because we might say, like, “We really want this record to be this,” and we’ll talk about that for a year. But in the end it comes out to be nothing like that. We’re all just excited to play together again.

At some point, you have to decide if you’re doing it for yourself or your fans.

Exactly. And the other side, psychologically, is that we’ve always been that way, I would say almost to a fault. When it comes to songs we’re gonna play live, how we record stuff – we really don’t take into account what anybody else thinks. And I think that’s a great thing. I think that’s probably why we’ve been able to do it as long as we have. It’s a weird thing! You play an album live before it’s been recorded, and a lot of your hardcore fans basically have that record [bootlegged], and then when the record comes out different it can be a disappointment for them. So it’s a struggle.

Seems like an odd thing to complain about. They’re getting new recordings.

We’ve talked about what it would feel like to record an album first, and then go play it. We’ve never done that before. And at some moments it seemed like this record could have been that. I’m sure there will still be a lot on the new record that we probably will just do in the studio.

Seeing a band live can be most interesting when they’re not promoting a new album.

Totally. That’s how I feel. I think we all say this in different ways. I just went to go see Neil Young recently – he’d be playing, you know, “Cinnamon Girl”, and I was stoked, there’s no doubt. But the reason I thought it was a great show was because there’s a dude who, as old as he is and as long as he’s been playing, was in no way playing to nostalgia. He was still just expressing himself. That was apparent whether he was playing old songs or new songs. In general when I go see music, what I want is to have my interest piqued in some form. And that comes out of stuff that is surprising to me rather than stuff that is expected. It’s great to be able to know the lyrics to a song, but there’s also something really great about being like, “Holy shit, that’s a great experience for me.” I think all of us feel that way.