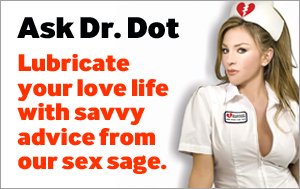 Q For the past four months I have been dating a JAP (Jewish American Princess). She is five years younger than I am but makes loads more money than I do, and I earn about €8000 per month. She doesn’t smoke, drink or treat me badly; in other words, she would make the perfect wife and baby mama. I just can’t seem to get over the fact that I feel like her bitch.

Recently she gave me a watch. She didn’t buy it new – she just took it out of her drawer and asked if I wanted it (clearly a man’s watch, probably an ex). I had a jeweler appraise it, and he said it was worth at least €10,000.

All of my past relationships were different; I was the breadwinner and felt like a strong man. Now suddenly I feel emasculated. Is there a way to get past this?

All of her friends are very wealthy too, and I just feel out of place when we all go out to eat, etc. Any words of wisdom you have would be much appreciated. Basti the Bitch

A It seems there’s just no pleasing you men. If you date down, you whine about women being gold diggers. If you date up, you feel like a kept man. Stop your whining and just enjoy your successful girlfriend. It’s not fair to punish someone for their income, be it meek or plentiful. As long as she’s not rubbing it in your face or complaining, you should just ignore her financial status.

I do feel it was a bit tacky of her to (1) give you such a costly gift after just a few months and (2) give you a used men’s watch, but there are worse things in the world. If your manly-hood is threatened by a strong woman, instead of running and finding a less fortunate woman to make you feel better about yourself, why not take it as a challenge to do better at your career?

You’d probably feel much worse if you left her because of her success. That would be tough to live with, innit? (“I had to leave her – she was just too wealthy.”) Booo-hooo fucking hoooooo.

Things started to slow down, because I found out he was trying to hook back up with his ex-girlfriend who he cheated on his wife with. He told me that it was completely over with her, but I found some texts where he begged her for a chance, so I called it off with him.

Doc, please help: I feel that I’m the problem even when he says I’m not because I’m sexy and hot. Eager Beaver

A The biggest problem I see in this situation is not the droopy cock but the fact that you trusted a cheater. He cheated on his wife with another, then cheated on you with her. How could you possibly want or trust a scammer? His cock is probably being beat down by that pesky force called karma.

Big cocks are fun, yes indeed, but they are seldom content with parking in just one spot (difficult for them, as everyone wants a ride and they feel they are doing society a favor by sharing; it would be a “pity” to give it to just ONE person). Either take a number or take a stand.

Q So, I left my boyfriend of eight years (a trust fund baby from Romania). I just turned 34, and he is 38. He would not propose, move into a bigger flat or even discuss any sort of “future” with me. His parents have always hated me because I am not Romanian, and they secretly feel I am just after his money, which is total bollocks. His flat is so small and he has so much money, it just made me sick how frugal he was.

So why am I still fucking him?! We are basically still friends and still sleep together. The only thing that has changed is that I have shagged a few blokes since our split and, of course, kept that to myself. I know it is wrong to keep feeding my ex, but it feels so comfy. Basically I am asking you for some tough love, Dr. Dot. Give it to me, please. Lingering Leia

A No harm in it really, apart from the fact that you could damage your self-esteem by staying with someone who does not take you as seriously as you need him to and/or that you will never meet the right one if your heart/body are still entangled with the wrong one. If you waste too many years on him, your eggs will expire, and you may find it hard to get pregnant – IF you were wanting a child someday.

Just decide if what he offers is enough for you or not, once and for all. You’re not doing him any favors either if you’re still satisfying his sexual appetite, because only if he is starving will he make an effort to meet someone else who is happy with him just how he is. Shit or get off the pot.