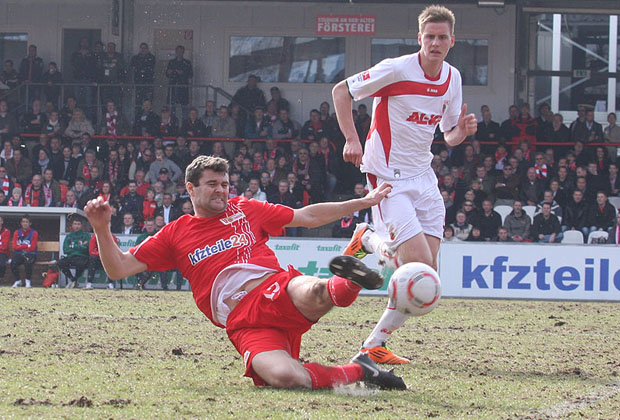 My head was throbbing at an almost molecular level. I could have set my watch by it if the damn thing hadn‘t just inexplicably stopped. My lips were being held together only by my wife’s electric pink balm which was the only soother to be found in a late morning’s fumble around the flat. Mustard dripped down my top from the breakfast wurst and the fly on my trousers had just exploded leaving me as exposed as Jimmy Swaggart’s, er, morals. The sportsdesk wasn‘t looking it‘s best on Saturday for 1.FC Union’s home game against FC Augsburg. I looked like a dirty, pasty faced Dr. Alimantado in drag on his way to the Alte Försterei. Things were going badly already and it wasn’t even down to the previous night’s parties welcoming the travelling fans to the city.

What I needed though was not an image consultant. It didn‘t need saying that today I wasn‘t going to get any…. it was goals I lusted after. It had been 270 long minutes without seeing a single one. Not just at Union, but across the board (or should that read bored?). I’m sure Tennessee Williams could make a good story out of it, all clammy hands, furtive looks and sweaty brows leading to inevitably unfulfilled passions, but personally it has become a struggle to fill in the gaps.

But Augsburg was second in the league. Parsimonious doesn’t come close, they had only conceded 21 in 25 games this year. A point would be another good result for Union in the battle for the Klassenerhalt after last week’s draw at Aue, and it was always likely that Uwe Neuhaus would try and discreetly stifle the excellent attacking intents of Michael Thurk and Torsten Oehrl – especially with Christian Stuff out for the rest of the season. Ahmed Madouni and Bernd Rauw were the central defensive pairing, sheltered by Daniel Göhlert and Christoph Menz as the holding midfielders and flanked by Paul Thomik and Michael Parensen at full back. It was a strange formation. 4-2-3-1 becoming 4-2-2-2 almost. Just like Brazil in 1982, almost.

The thing is for all their qualities – and this is hardly a mark of disrespect – that Menz is not Falcao and Torsten Mattuschka is not Zico. The use of the formation was not designed for Brazil‘s flowing, ruthless and artful attacking, but to stifle. Brazil‘s formation worked because the full-backs were allowed to maraud forward, knowing that their midfield would be able to keep the ball in perpetual motion and thus protecting the huge gaps they would leave behind them. Even Socrates would have had a hard time passing adroitly on the mud bath of the Alte Försterei. It was up to Santi Kolk to do the donkey work, plugging the gaps on the right, sacrificing his playmaking for the vital point. They all had to take one for the team.

It was combative, and seldom pretty, but it was effective. Apart from a gilt edged chance for Thurk at the end Augsburg were kept mostly quiet. Marcel Ndjeng had menacing flashes down the right-wing, but their own double holding midfielders nullified the midfield battle.

Mattuschka and Kolk both went close with shots palmed away from the top corner by Simon Jentzsch. Chinedu Ede flashed one over the bar. Oehrl’s nasty, chest high, lunge on Göhlert – which earned him a yellow card in the 14th minute – was surprising mostly only in that it wasn‘t made by his teammate Marcel De Jong, whose namesake Nigel had committed a similar foul on Andres Iniesta in the World Cup final.

Next week Union play the hopeless and hapless Arminia Bielefeld on the new turf that was starting to be re-laid immediately after the final whistle on Saturday, and with it will hopefully come the return of that great lost commodity – the goal.

“The goal is football’s orgasm. And like orgasms, goals have become an ever-less frequent occurrence in modern life,” said Eduardo Galeano. Augsburg boss Jos Luhukay looked like a man who would agree. He screamed at his defenders to get up for a free kick from their own half just before the break. Instead it was laid off square, his moustache bristled with pent up frustration and he took it out on a bottle that was unlucky enough to be within kicking distance of him.

“Scheisse!” he yelled: the cry of the unfulfilled.

Madouni and Rauw, Menz and Göhlert had rendered his team impotent. Michael Thurk, top scorer in the league last year, but who has missed half of the season through injury, was shooting blanks.

So, come Sunday morning next week – and just to extend this tawdry metaphor a little further – for the fumbling around phase is over. For the cheap attempts at copping a feel as they pretend to yawn and stretch the arm around their intended‘s back to stop. It is time, as I‘m sure Barry White would have put it better, to do it. It is time to score, baby.