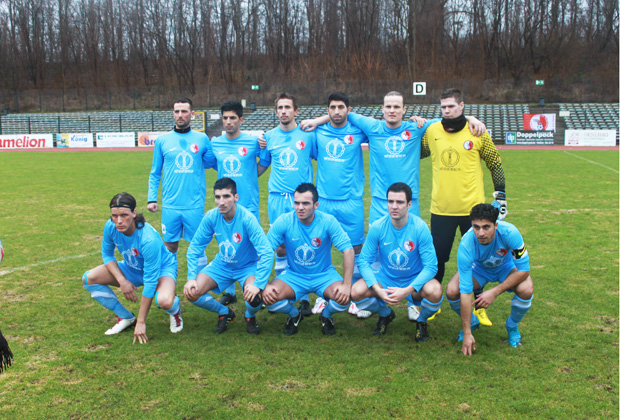 The day before was different. Hertha lost to Union in front of nearly 75,000. A landmark game for both clubs, which will be remembered by both for conflicting reasons. This game wasn’t like that, both Hertha and Union’s legacies come fully formed. The derby was just a confirmation of them.

At Berlin Athletik Klub 07 (BAK), they are forging their own in the Poststadion. Attendances are up, sponsorship is up and they sit proudly at the top of the NOFV Oberliga Nord without a loss, and with a mere three (yeah, three!) goals conceded all season.

Against Optik Rathenow they had to continue the run. As the president said in his programme notes: “Theirs is a prized scalp now.” They are the team to beat – the current Berliner Pokal holders and the team that gave Mainz a run for their money in the DFB Pokal earlier on in the season.

But when they will be finally scalped this season is still open to question. Bahman Foroutan has built a side that is stubborn and effective. They are the likeness of the coach himself. When people used to talk about the great Italian striker Giuseppe Meazza they said he “scored to the rhythm of a foxtrot.” BAK do not swagger seductively. They aren’t necessarily dancers. They play to the rhythm of early 1990s shoegazers. They are the Ride of Football. The ball stays on the floor and the passes remain short. They are compact when they don’t have the ball, and spacious with it. Effective and nullifying, they stick to the traditions of Turkish football and let the ball do the hard running.

The 2-0 victory wasn’t as easy as some have been for them this year, but Rathenow were thwarted by two excellent saves from ‘keeper Marc Stillenmunkes and the excellent midfield partnership of Ibrahim Keser and Kevin Neuhaus. One big and one little. When one goes forward, the other drops back. When Rathenow tried to break through they were swarmed all over like a starlet at a stag do. BAK are disciplined and technically very good. Even on a crappy Sunday where the water hung in the air like the sweat on a junkies brow – and Rathenow were starting to get on top of them in the second half – they held firm.

Foroutan is also a shrewd old fox. He has picked out the best of his former team, Türkiyemspor, and refined them. On Sunday, Pardis Fardjad-Azad was a lone striker, but he is too sleight for the role in the long term. The new signing from Ankaraspor, Mehmet Özdemir should take care of that and Fardjad-Azad can return to the left-wing where he fits best.

Rocco Teichmann, announced as Pocahontas, is an excellent example of Foroutan’s wiles. A case in point. Last year the EXBERLINER sportsdesk, somewhat uncharitably, described his play as being equine-esque. Maybe it’s the ponytail that put me off, but he often seemed to be charging around for the sake of it. He wore hooves instead of boots, but Foroutan has refined him now over time. His shouts can still be heard throughout Moabit, but there is a calmer player there, and one that knows his job as a classic big central defender. Again, it is no surprise about the parsimonious number of goals conceded. At one point he even had the time for a charge up the left-wing, although just failing to deliver the killer ball, it was almost like Puskas. The galloping major.

The goals were simple and effective, Neuhaus heading in after the fourth consecutive corner in a row fell sweetly to him and Metin Cakmak’s glancing header from a free kick. Two set pieces. Two goals. Two nil. Job done, as they say. Under Foroutan, and his assistant (the good cop to his bad) the former Hamburg player Özkan Gümüs, BAK are starting to forge their own legacy, and a promotion to the Regionalliga this year will go a long way to cementing it.