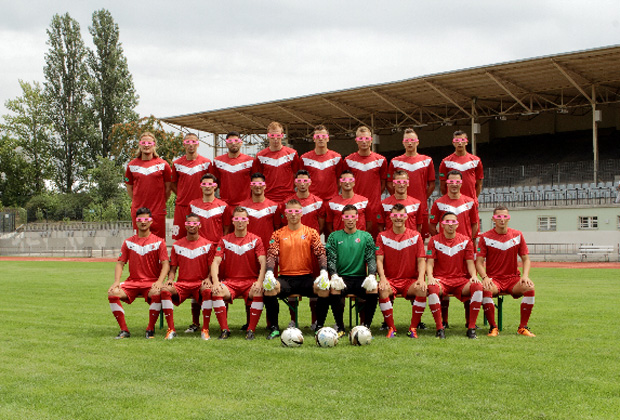 Berliner AK 07 (BAK) mostly enjoyed last season. They came third in the league in the end, but the pressure was already off by the time it came to the crucial run in. They had announced that they would be applying for a license for the Regionalliga Nord, and it turned out that they were the only Oberliga team to want it. They could have lost every game and they would still have gone up.

This shows the extent of their ambitions. Taking over the poisoned chalice from Türkiyemspor, who moved in the opposite direction, means spending a lot more on players and on travelling. Spending hard earned cash on the day to day nitty gritty in the unloved nether regions of semi-professional league football that suddenly seems so necessary. They would be joining teams such as Magdeburg and RB Leipzig who average around 5000 at home, and the under-23s of teams such as Hamburg and Cottbus, who average about 5000 less.

On Sunday BAK faced Hallescher FC, the team who alongside their neighbours, Leipzig, are up there with the favourites for promotion this season. Hallescher has a tidy mixture of seasoned pros and youth and knows exactly what to do at this level to succeed. They had, almost exactly a year ago, disposed of 1. FC Union in the Berliner’s traditional first round exit of the DFB Pokal.

Relying on the spine of the team from last season BAK always knew that it would be a steep learning curve in the ratified air of the higher level, but they acquitted themselves pretty well in a tough, stop-start game, and were slightly unlucky to be on the wrong end of a 1-0 defeat in the end, the new signing from Dundee United, Andis Shala, looping in an excellent header in the first half.

But, not for nothing, have the upstarts from Moabit got a swagger in their step. They have plundered local resources like J. R. Ewing with a hard-on. In came Union’s number three ‘keeper Christoph Haker, to join his former coach Jens Härtel at the Poststadion. A bigger surprise came in the signing of the former Union legend Ronny Nikol. A hero of their run to the cup final all those years ago. He is the other side of 35 now, but a bit of nous will go a very long way in this league and his experience will see them well, when he can get himself fit.

As it is, BAK’s back line from last year held themselves together very well, with the ponytailed wonder Rocco Teichmann howling like a banshee next the impressively marauding right back Henning Lichter.

But Sunday morning started with a bigger surprise. The email went out first thing. BAK were announcing their real coup of the season, the signing of Björn Brunnemann, who only a season ago was marauding through the defences of the 2. Bundesliga with Union. His confidently bleached crop belied a player who was too often side-lined through injury, but on occasions played with a swagger and drive that unnerved the most solid sides in the league. He could prove to be a very big fish in this pond. The blonde mopped shark of the Oberliga.

He knows HFC; he played the whole long 90 minutes in Union’s cup loss last year, but will need a bit of time to click with his new team-mates. Sunday was not going to be about revenge. Sunday was a joy to just to be playing again; when it looked like he might have to leave the city that he has made his home just to get a decent game.

But, to labour the metaphor a bit more, he’ll have to play a bit closer to the front to knock some of these big old Oberliga seals off their ice flows. BAK laboured at times against dogged opposition happy to absorb the pressure, although Nicklas Brandt put the ball millimetres over the bar with a downward header that bounced up but, freakishly, just kept on going up. It was so close to being their first goal in the league. Härtel looked sanguine about it. He knows the work they have to do.