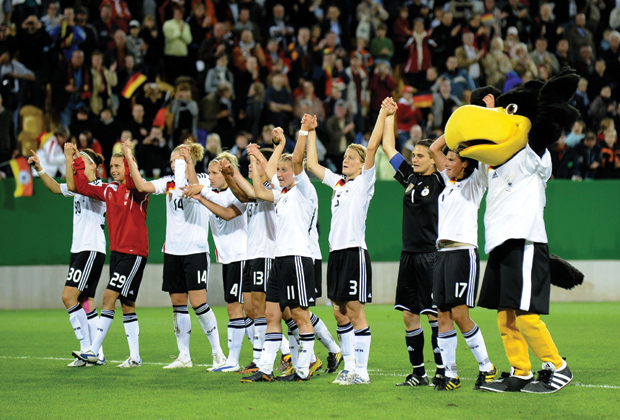 Why should we care about the Women’s World Cup? Last year the hoopla got progressively worse. The world watched as the male World Cup proved to be a bloated, hyped-up capitalist wet dream of a land grab, mixed with a healthy dose of frequently dull and pragmatic football. There were too many teams, and many of the star players were either knackered or pampered. That the world was overjoyed to see Spain beat Holland in the final, simply because they had rarely seen a team as nasty and calculated as the Dutch, is hardly a ringing endorsement of the fare on offer.

To be fair, a German may describe last summer’s tournament slightly differently. The national team came third, destroying England and Argentina along the way, and did so with a young and irrepressible team that represented a multicultural nation at peace with itself. So imagine how excited they should be about this summer’s Women’s World Cup. It is here in the Heimat and will receive unprecedented coverage across the nation. Germany are, of course, the current champions – and hot favourites to defend their title for a third time in a row. Something a man’s team has never achieved.

They are representative of the country in a similar way though. From the determined older stars such as Inka Grings to younger, flashier players such as Fatmire Bajramaj – known to speak eloquently about being a glamorous, footballing Muslim woman – the team is also free of the suspicion and innuendo that follow the hugely overpaid male players. They do this for the love of the game, not necessarily for the remuneration.

By the time it begins on June 26 with the match against Canada in front of 80,000 people at Berlin’s Olympic Stadium, the country will be at fever pitch. Few places take the women’s game as seriously as Germany, and you won’t be able to open a paper without reading about it.

Melanie C’s, er, anthem, “Rock me”, will be the soundtrack to the summer (proving that no form of the game is free from the marketing departments idea of ‘good music’).

The nine host cities will be full – with over 700,000 of the 805,000 available tickets already sold at the time of writing. There is the possibility for some real fireworks on the pitch, and for a genuinely interesting, bullshit-free month of football, featuring ambitious players who are not being screwed over by their big-club-dominated leagues.

So, should we care? Well, yes; emphatically, yes. From its beginnings in China in 1991, the World Cup has mirrored the huge international growth of the women’s game, whilst retaining a relatively slimmed down format.

The game isn’t totally dominated by the traditional power bases. There are the clear favourites – Germany, Brazil, the USA, Sweden and (maybe) England – and the unknowns, like Equatorial Guinea. Also vying for the title is Canada – coached by Carolina Morace, the only woman to have led a professional men’s club – plus Colombia, France, Japan, North Korea, Mexico, the rapidly improving New Zealand, Nigeria and 1995’s champions Norway.

The favourites are those with the established infrastructure – apart from Brazil who are more of a force of nature, led by the devastating four-time FIFA World Player of the Year, Marta Vieira da Silva (known simply as ‘Marta’). Norway have had a domestic women’s league since 1984, and Sweden (whose league started in 1982) have over 60,000 licensed players over the age of 15. The USA’s league re-launched in 2009, but average attendance is over 3500 per game across the board. The German Bundesliga has provided the winners of the European Cup in six of the last 10 seasons. By contrast, the Women’s Premier League in England is, by the time you read this, only a couple of months old.

The amount of money in the game is growing, and that is reflected in the rapidly improving standards, but most players still have to work for a living. England’s star Kelly Smith receives roughly €100,000 per year playing in America, but Germany’s Simone Laudehr is a professional soldier. Many more are sports instructors employed by their clubs, or even by the companies that own their clubs – such as Wolfsburg’s benefactors Volkswagen. This also means that the game is still primarily played for fun, for competition and for reflected glory. For those bored with pampered rich kids writhing and bitching on the pitch, then this World Cup could truly be an eye-opener. For those disenfranchised by the eye-watering prices of football, WWC tickets were available from as little as €6. All in all, it should be a great three weeks.