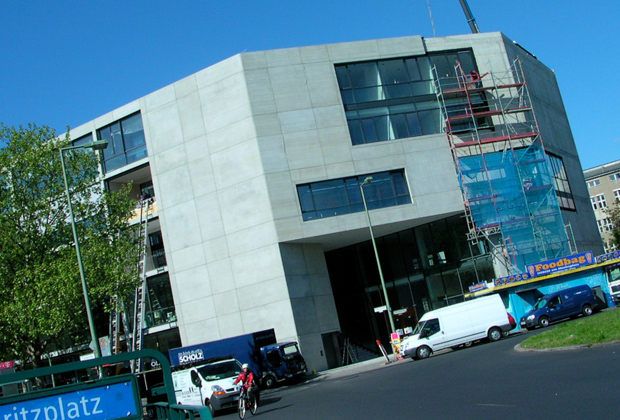 Cue trumpet fanfare: the Guggenheim is marching on Prenzlauer Berg! The museum’s latest crusade is a far-ranging search for bright new ideas in urban planning. They’re sending out mobile “laboratories” to key cities – the first will materialize next year in Berlin, specifically in a parking lot on Kastanienallee.

To honor their guests, the district is fast-tracking improvements – wider streets, more parking. But ‘fast-track’ here means skipping the part where they get community input and approval. With no sense of irony, they’re ramming through the changes while the muzzled locals watch their sidewalks disappear.

When will we learn? All the chatter about enlightened urban planning – round tables, symposia and mobile laboratories – are just titillating distractions. Behind the curtains, the big decisions are made by the Big Boys holding the Big Money.

Maybe it’s time for us little people to skip the headaches, sit back, relax and put our city’s future in the hands of iron-fisted visionaries who get things done. Democracy’s a mess – Berlin needs a benevolent dictator. I have two candidates: Andreas Krüger and Christof Struhk, the guys who run Modulor.

Modulor? If the name’s unfamiliar, you’re not one of the architects, artists and other creatives who rely on this shop for their fix of marbleized paper, transparent spheres, gold leaf, fake fur and so, so much more. Not content with their cramped kingdom on Gneisenaustraße, Krüger and Struhk have crowned themselves emperors of Planet Modulor, a “creative department store” housed in the new Aufbau Haus on Moritzplatz. The project is big, brash and grandiose – and exactly what Berlin’s been waiting for.

What’s so great? First, the location. Moritzplatz is a neglected corner of Kreuzberg screaming for redevelopment. This sad traffic circle used to be a bustling commercial hub that rivaled Potsdamer Platz and Alexanderplatz. The big vacant lot on the southeast corner was once a grand Wertheim department store – its owners got the subway’s builders to redirect the U8 line to Moritzplatz and demanded a direct entrance to their store. Then WWII wiped it all flat. For decades it’s been a bombed-out Berlin wasteland best known for nearby Robben & Wientjes, those rental vans with the blue seals – it’s the place Berliners go when they want to go somewhere else. Planet Modulor will change all that.

Second, it’s a smart re-use of an existing building. Modulor partnered with publisher Matthias Koch to buy the 16,000-sq. metre Bechsteinhaus from the city in 2008. With the help of Berliner architects Clarke and Kuhn, they expanded the former piano factory and replaced the bronzed glass façade with textured concrete panels. Inside, it’s more like a Modulor solar system with the store’s arty wares at the center and synergy-generating “partners” revolving around it: a tailor, bookshop, kitchen supply store, galleries and cafés. Upstairs is the headquarters for Aufbau Verlag, a literary publishing house. In the basement: a club and the new TAK experimental theater.

Third, Planet Modulor is very Berlin. It’s not some heavy-handed scheme to transplant an unwanted industry. It’s not a generic shopping mall. It’s part of an organic evolution of the Moritzplatz Kiez, where derelict factories are being reborn as creative workspaces like Aqua Carré and Betahaus. Planet Modulor serves this new artistic community without exploiting it. The businesses are stridently local. The culinary wonderland Coledampf’s & Companies includes a Kochlust bookstore and a Beumer & Lutum bakery, both Berlin-based, and specializes in wines and cookware made in Germany. Finally, the building also houses a kindergarten and is supposed to include a social integration project.

Can Krüger, Struhk and Koch succeed? These white knights might jumpstart a comatose neighborhood and make a nice profit, but they’re also putting a princess in peril. Prinzessinnengarten is a communal urban garden across the street on the old Wertheim lot. Inspired by a visit to Cuba, Robert Shaw leased the land in 2009 as a place for locals to grow their own organic vegetables. How long before Planet Modulor’s success attracts investors hoping to replace 6,000 square metres of greens with condos and chain stores?

My suggestion: hand the Wertheim parcel to the Planet Modulor guys – crown them Masters of the Moritzplatz Universe – and see what magic they can work with an even bigger canvas.

The grand opening of Planet Modulor/Aufbau Haus is June 13-16.