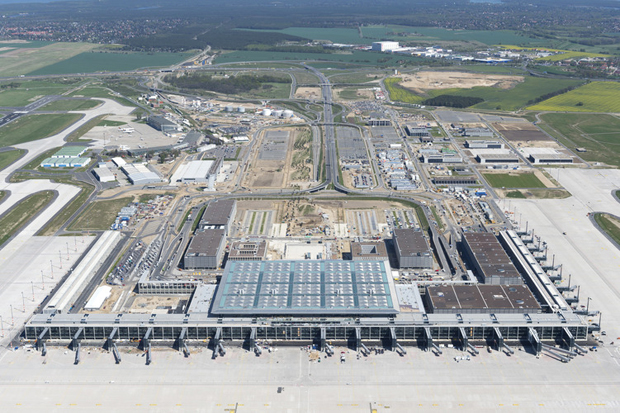 No one seems too worried about old BER anymore. People are settling into a comfortable, non-committal attitude about it. Thirty-five million euros a month operating costs for a non-operational airport? Peanuts! Just imagine how much a functioning airport is going to cost! There’s now talk of total costs passing the €5 billion mark.

On Thursday, airport boss, 71-year-old alpha male of Deutsche Bahn fame, Hartmut Mehdorn, announced that four percent of the building work needed for the airport to open has been completed. This is the guy that promised us a “sprint” when he took the helm earlier this week. At least Hartmut – whose name translates as something like “hard courage” – means well!

Joe Kaeser, the CEO of Siemens, one of German’s most reputed industrial concerns that happens to be in charge of fixing BER’s non-operational fire protection system, is chillaxer-in-chief. Last week, Joe called the stressful plan to open the place up ASAP (“around 2016”) just “too ambitious” and said: “It’s totally fine, if it opens in five or 10 years!” I suppose that’s understandable, since Siemens is faced with the daunting task of laying 90 kilometres of new fireproof cables. They need years, possibly a decade for the job. Fair enough, it wasn’t their fault that nobody thought that the fire protection system should come with fireproof cables.

And if these announcements weren’t encouraging enough, the latest news is that mayor Klaus Wowereit has been reappointed chairman of the BER supervisory board – even though he already held that post from 2008 till early 2013, i.e. “supervised” most of the mess BER’s in.

There’s more: 11,000 houses need to be soundproofed against noise pollution before the new south runway can open. Oh, and the old north runway (used by Schönefeld) needs to be renovated. Both of these mammoth tasks must be completed before any talk of opening.

Despite the constant growth in air travel in and out of Berlin, Tegel and Schönefeld are doing pretty much just fine. These old veterans of aviation are processing almost as many passengers as BER was supposed to do when it was supposed to open. By the time BER does open up, it will be too small. So I say: just keep expanding Schönefeld in an ad hoc, haphazard way. Throw up another temporary building whenever things get tight.

And do something else with stillborn “BER”. Events, for example! The Panorama fashion fair is already camped out there during Fashion Week, sparking the ire of Bread & Butter boss Karl-Heinz Müller, who’s miffed because he came up with the idea of a fashion fair in an airport.

My suggestion: rename the place “BERlin” and hand it over to the movers and shakers of the Berlin underground and off culture – a conglomerate of the people behind Berghain, KaterHolzig, Watergate, Yaam, Hebbel Theater, Ballhaus Naunynstraße, Sophiensaele, SO36, Transmediale, Wilde Renate (okay, not Festsaal Kreuzberg – they need to learn a thing or two about fire safety), etc. – and they would come up with something in that massive, unused space that would knock the socks off of anyone who stepped foot inside: theatre, art, music, clubbing, food trucks, street markets, roller derby, movies, spas, hotels, you name it: an indoor Berlin fantasyland complete with lots of banged together wooden shacks that could be rented on Air BnB, the best dealers, an endless supply of Club Mate and the finest resident DJs. Easyjet tourists could be bussed directly from nearby Schönefeld – with any luck many of them would never even make it into the city!

We’ve got to think outside the box! As comic Horst Evers pointed out, BER could just open… as a museum. A museum for air travel. Which is on the way out anyway. We all know that planes are smelly, noisy, dirty unnecessary things. So why do we absolutely need them at the airport? All those ridiculous noise pollution lawsuits would vanish in an instant.

Berlin, take a chance. Make some headlines. Be. BERlin.