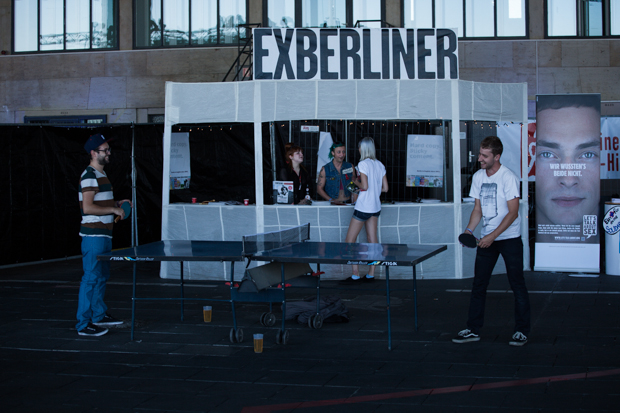 Hello, EXBERLINER fans of broken dreams and broken English. This is D. Strauss, XB Music Editor and I, along with key members of the EXBERLINER staff (ones who haven’t been rendered deaf by the shouting in their heads) will be giving you round-ups, reviews, inside scoops and trash talk from the tarmac at Tempelhof (renamed Hasselhof) and Arena for the next two days. This year’s Berlin Festival, after years of overcrowding, appears to be relatively lightly attended, though we have yet to hear from the headliners.

The Fest has evinced a fondness for aging Brits from its very beginnings (who can forget headliner Ian Brown causing the punters to flee to the comfort of chicken farm escape busses back in 2005?) and we’ll be seeing and reporting on Pet Shop Boys, My Bloody Valentine and Blur, among others, including Björk who has banned all photographs of her — perhaps she was mauled by her swan dress. One gets the sense that they may have overpaid for the old-timers, particularly for a festival with a young clientele, as the earlier acts are relatively caché-free compared to previous Fests. Which gives the opening performances by Bastille and Capital Cities a certain irony, as they probably came cheap, but are arguably the biggest acts at the Berlin Fest, if recent chart position is any indication, accumulating the number of hit songs in the last few months that it took most of the headliners (excepting Pet Shop Boys) years to muster. At least they got paid, unlike the set-up crew who, sources have it, have been selling their all-access wristbands off on the DL for compensation. Which might explain the iffy sound on the Pitchfork stage, which rendered Bosnian Rainbows, Omar-Rodriguez Lopez’s new ensemble, pitchy, like a fork in the ear.

Of course, both hitmakers are still pretty green, particularly Bastille, the latest in the onslaught Yo-oh-oh-oh-delling bands ala Alt-J. Dropping Twin Peaks samples (and a song named after Laura Palmer) under Beach Boys harmonies suggests an act more influenced by evil than what came out, and occasionally assuring the audience that he was depressed wasn’t enough to curb singer Dan Smith’s general bounciness. With many of the songs piano driven with light beats, building toward the epic, Bastille is as good a textbook for the mainstreaming of U.K. indie, although the black-ish covers, including one of Snap’s “Rhythm is a Dancer” was yet another argument for the total absorption of R’n’B into indie music, often in unpredictable ways, from Salem to How to Dress Well. But Bastille is currently too well-mannered; I want my pop a little stupider. In their dark shirts, both Smith and drummer Woody Wood just faded into the main stage background.

The First We Take Berlin Stage has been constructed right next to the EXBERLINER world-famous ping pong table (a match against our interns is more than worth the price of a €90 Tempelhof-only ticket), and it pretty much reifies Bastille’s current template, with well-groomed Swedes The Majority Says and earnest folkies Caracol filled with educated middle-class yearning, and as well-groomed as Kanye West’s pubic area. I think one of TMS’s lyrics went “I’ll make a Dropbox.” What’s needed is a juicebox, for where is the Saft? One thing that can be said for hipster ‘stache-and-beardo-weirdos Capital Cities, currently riding the German charts with “Safe and Sound” (and, as you shall see, juicing that orange for every last piece of pulp), is that the L.A. cynicism of their post-post-post-irony evokes the Grand Wazoo “fuck you, love me” of the Zappa tradition. Coming out in white satin jackets embellished with their band name and invoking Matt Biano-esque lite-jazz and lite-reggae stylings down to their trumpeter posing in Miles-esque bent-back silhouette, they performed can’t miss covers of Madonna’s “Holiday,” The Bee Gee’s “Staying Alive,” and, in an amusingly perplexing manner, Pink Floyd’s “Breathe,” which they then referenced in another one of their songs. They also attempted to impart dance moves to the German audience, always a pyrrhic act.

The beauty of including smooth jazz in your repertoire is that if the song gets boring, the boredom becomes part of the concept. Likewise, if you’re bored of your hit, just play a remix on your laptop and dance around the stage, as was the case at the end of CC’s set. I’ve never seen an act do this before — is it an extension of the current I-can-press-the-on-button-I’m-a-DJ craze? It seemed to work, getting the best response of the day, though they failed in their attempts to get anyone to take her shirt off. I guess that’s where they and Zappa part company.

Now it’s time to go have my photo taken for Berlin Fest’s main booker Melt’s Meltfaces project, which sounds like the title of Eli Roth’s next film.