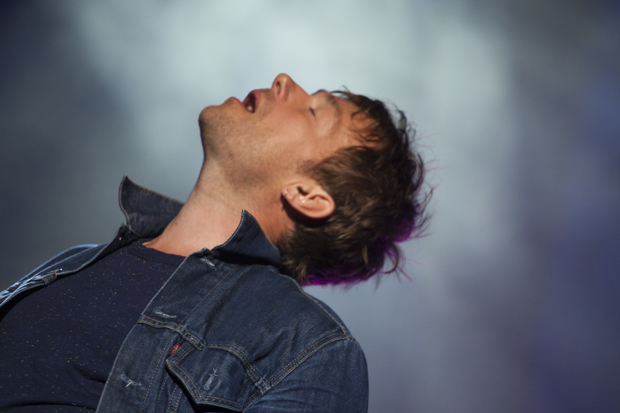 Walter Crasshole here, bringing you the end of it all for night one, lazily picking at the pop main course that the Berlin Festival apparently shelled the majority of its money out for. Especially when you consider the rest of the lineup.

The entrails of night one of Berlin Festival don’t leave much to remark upon. Like Nico dying of heart attack on a bike instead of Jane Mansfield getting decapitated in a car crash, it just happened. Which isn’t to say it wasn’t a worthy corpse. Just predictably beautiful.

That’s not to say that MIA. (NOT M.I.A.) wasn’t surrealistically disturbing. The crowd of mostly German teenage girls and their complacent boyfriends wasn’t so much a shock, and neither was the man wearing a German flag as a cape. The absence of anyone else that may appreciate good German pop was though. Remember, 30 years ago, Nena’s “99 Luftballons” was actually known to Americans. Even the internet couldn’t help MIA. get off the ground. That made the strange de-facto nationalism a site to behold. She crafts good pop songs with a weird leniency towards her Vaterland, but it would be nice to see someone other than Germans there to show that it’s not in vain. In America we just call that country music.

One could call Pet Shop Boys country music if their homeland was a utopian vision of Morrissey’s clubland. The kind where one can ruminate on the loneliness of it all and still come out a hero. Pet Shop Boys put on one hell of show though. Tempelhof’s masses where all eyes forward for the entire set, including a chunk of Exberliner’s senior staff. English voices swelled all the way through a cover of The Village People’s “Go West”, even as the skipping backing track reminded us that the technology may have gone East. Forty-five costume changes later and I wasn’t exactly ready to leave a crowd that had aged three decades since the MIA. stage appearance.

Those that haven’t changed costumes, or even clothes (take that Grunge Music) in the last 15 years took the stage in a rather satisfying coup for those that complained about the preceding bands and stages (ahem, Rachel). Blur will always be technically perfect. In melody, in lyric, in delivery, in the ageless face of Damon Albarn. And so is the way to fade out the first evening of Berlin Festival, even with a 10 second version (seriously, you thought it was short before) of “Song 2”, which had been so shamelessly plugged on many a Berlin Festival poster throughout Tempelhof. Woo-hoo!

Afterwards, the handclasping blogging brigade of Exberliner were all reminded that we live different lives in different areas of town. And away we went, since the press lounge forced I and the photographer featured above to finish our blogs over whiskey on the rocks elsewhere. Love’s the greatest thing.