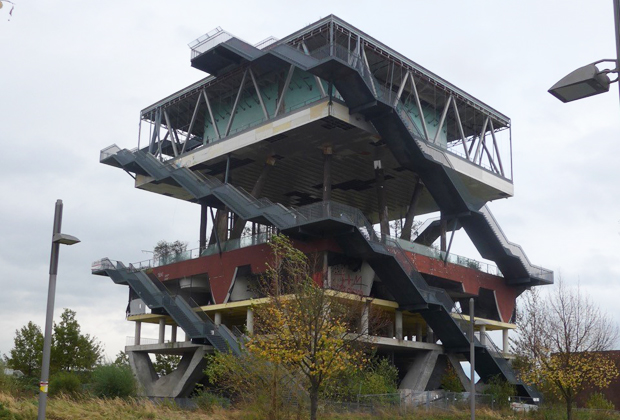 A magical tower stands at the edge of Hannover: it’s 40m tall with stairways wrapping around the outside. A whole floor in the middle is completely open, held up by giant tree trunks. The walls are covered with graffiti, the cracks are full of weeds, and some of the stairs have collapsed. A big piece of metal hangs by a wire, banging against the wall at the slightest breeze. In other words, it’s a playground for adults.

Did this tower come out of a dream? No, it’s the Dutch Pavillon from the Expo 2000 (photos), the world’s fair that took place 15 years ago in the capital of Lower Saxony. A few of the buildings from the Expo found a new use – but most are rotting.

And every Olympics leaves behind useless concrete behemoths as well – and endless fun for young explorers. Oh, to be 10 years old again in a former Olympic venue!

Berlin of course already has plenty of amazing abandoned buildings – including some remnants of the Olympics of 1936 – but couldn’t it use a few more? Sure, one could argue that a few billion euros in construction money would be better spent on social housing – but what are the chances of that happening? Since they’re going to throw away that money on something or other anyway, might as well throw it away on amazing ruins.

While I’m usually opposed to the plans of the capitalist oligarchs that rule our city, now I’m on their side. “Why, Mr. Riceburg, I’m shocked!” Well think of this: The World Cup in Brazil in 2013 led to some of the biggest protests in that country for decades. Hosting the Olympics in Berlin would lead to riots the likes of which we haven’t seen since the Goldenen 20er Jahre. The last time Berlin applied for the Olympics, in the early 1990s, an Anti-Olympia-Komitee organised some great protests.

Berliners are no happier about this new attempt. It’s a great sign of the gap between public opinion and published opinion: a few big corporations are telling us that “We want the games”, but the reactions of actual Berliners range from “meh” to unrestrained hostility. When a PR firm organised a “citizens’ forum” to present their plans, they were shouted down and had to call the police. When they invited residents to a pro-Olympics fun run, they expected 1000 people – a grand total of 80 showed up. But the promoters stand to earn billions from an event like this, so no reason to expect them to drop their dishonest advertising campaign.

Instead, the city is trying to block satire. When a blog superimposed the “Wir wollen die Spiele!” logo on posters of the last Berlin Olympics – the ones Hitler opened in 1936 – the Senat threatened to sue them. The government needed to be informed that satire is, despite all appearances to the contrary, legal in Germany, and it doesn’t even need to be labelled as such.

Many buildings from 1936 are, incidentally, still sitting around unused towards the end of the U2. But by today’s standards, they are miniscule. If we invest 50 billion euros or so – just some pocket change, really – in a few years we’ll have a creepy abandoned swimming stadium where tourists can hold illegal raves or junkies can buy drugs. Maybe we can even get a pointless tower like Hannover has. Wouldn’t that be great?