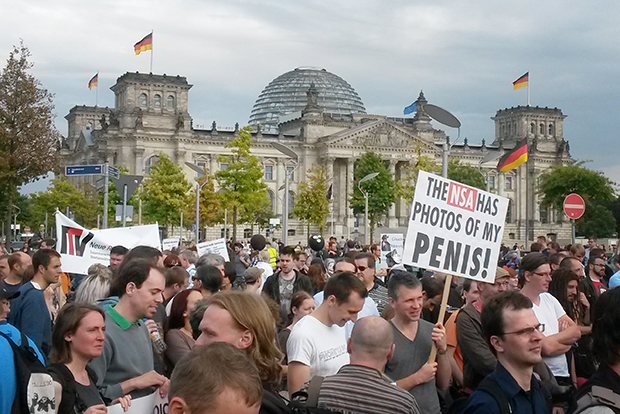 Berlin might well be home to the highest concentration of “Snowdenistas” in the world – starting with the small circle of trusted confidants. There’s Edward Snowden’s first ally, US documentary filmmaker Laura Poitras, who in January 2013 received a pseudonymous email, trusted a certain whistleblower’s story and met and filmed the young NSA runaway in his Hong Kong hotel room – resulting in a video that was to make history.

After being on a watchlist, detained and interrogated countless times, she made Berlin her base. There’s Sarah Harrison, the Wikiangel sent by Julian Assange, who spent 40 nerve-wracking days in Moscow’s Sheremetyevo airport while escorting Snowden to safe haven. Advised by her lawyers that it wasn’t safe to return home to the UK, Harrison decided to go to Berlin, joining another exile, the US hacktivist Jacob Appelbaum, a close associate of Assange and friend of Poitras. There’s also former MI5 agent Annie Machon, herself a former whistleblower turned outspoken anti-surveillance campaigner.

It is not a coincidence that so many Snowden allies have ended up here (and the 6500-plus attended demonstration Freiheit statt Angst on August 30 [see photos] bore witness to the strength of the movement). Berlin has always been a centre of crypto-dissidence – starting with the founding of the Chaos Computer Club 30 years ago, now represented by the likes of Andy Müller-Maghun and Constanze Kurz. Add to these Daniel Domscheit-Berg, WikiLeaks spokesman turned renegade, now a member of digital transparency champions the Pirate Party. They form the nexus of a constellation of collectives and organisations from the non-profit Digitale Gesellschaft to the international NGO Tactical Tech, a collective focused on technology and activism, to the Courage Foundation, an international whistleblower support organisation set up by Harrison last June – not to forget the benevolent techies who patiently teach Berlin’s crypto-illiterates the art of online privacy at open workshops they misleadingly call cryptoparties (no music, booze optional).

United by a strange mix of digitally enabled awareness and cyber-utopianism, they meet with whistleblowers, human rights activists, academics and lawyers at international conferences the world over. Here, they socialise at a certain weekly Mitte Stammtisch or at events across Berlin’s alternative bars, like Citizen Kino’s evenings of media-subversion.

It’s an underworld populated with Club Mate drinkers who don’t necessarily live in Neukölln, rarely own Macbooks and don’t exhibit their lives on Facebook. Instead, they send each other encrypted messages from computers covered in “Tor Project” or “Asylum for Snowden” stickers. They often carry outdated mobile phones – the rare smartphone owners take their batteries out, knowing that even a switched-off phone can easily be turned into a tracking device and a networked microphone. They want to change the world but fear journalists. They’re distrustful. Realistic, stoic, idealistic. Often bespectacled. Mostly male, but not entirely.

The only one missing is “Ed”, as his supporters affectionately call him. In the meantime, lamp posts are plastered with stickers emblazoned with an Obama-campaign-esque replica of his face; even my vet has “Asyl” postcards in his office among the cute cat photos. In the age of ‘normcore’, digital nerds have grown hotter (I heard it: “Snowden is a sexy man.”) Snowden-sploitation?

The Berlin literati are catching up: this year’s International Literature Festival warms up with a Snowden support evening on September 8 (not sure who’s supporting whom here), complete with a panel discussion and a reading (a collage of Snowden’s wisest quotes). They’ve also initiated a petition demanding Germany to grant him asylum: we all want him in Berlin. Except for the German government, that is. Had Snowden been Chinese, they would have welcomed him with open arms as a political dissident.

The issue is that in many ways, the German political establishment has remained a lapdog of the US – from Cold War times, when the NSA had its Berlin roost in Teufelsberg, up till now. Germany is the NSA’s most important base of operations in Europe. The infamous XKeyscore is operated from the Hesse town of Griesheim, as revealed by one of the many documents in the Snowden cache.

Now we know about the collusion of the NSA and Britain’s GCHQ, to a lesser extent Germany’s BND, and half of Silicon Valley in the ambition to turn the world into what Snowden called a vast “digital panopticon”. Comparisons with 1984 seem as hackneyed as they’re apt: Big Brotherhood has descended upon us. We’ve entered the most monitored and spied-on age in human history. Our everyday habits and deeds are recorded, sorted and analysed by data collection agencies to the profit of online and offline businesses without our consent or knowledge. The digital economy has turned into a vast milking operation, and we’re the cows. Put that information in the wrong hands – we’re dead cows.

Now we know. Does this mean we’re more aware? Beyond the stickers and the outcry, what measures are we taking? Are we using Tor to browse the internet or encrypting our email? Or reverting to typewriters to outsmart the spies, as contemplated by the Bundestag’s NSA parliamentary commission: back to analogue? For its part, Exberliner is embracing digital enlightenment: we’re working on an open-source whistleblower submission system and, from this month on, we’ll be the first Berlin magazine with full digital privacy. As well as enabling our journalists to communicate securely when they need to, it is also a symbolic gesture, an act of political rebellion.

In times of impunity from governments, it is up to us, citizens, to stand up for our rights. Snowden, like Manning, Assange and many others before them (let’s not forget local whistleblower Brigitte Heinisch, whose legal battle changed the way whistleblowers are treated in Germany) is a classic example of what Albert Camus called a “rebel” – the man who says “no” in the face of what he considers to be illegal but also immoral, who fights against the kind of world he doesn’t want to live in. Citizens of Berlin, join the whistleblowers, cypherpunks and hacktivists – it’s time to rebel.

With Berlin being the centre of the digital revolution, there’s lots more to read in our September issue, on newsstands now or available in our web shop.