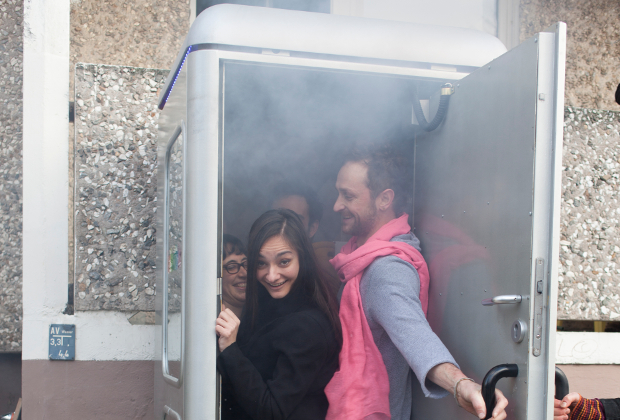 Toward the end of January, two mysterious phone booths popped up overnight at R.A.W. and Kater Blau. Inside each: a disco ball, a fog machine, strobe lights, a paisley panelled interior and a sound system pumping the sweet tunes of Britney and The Backstreet Boys.

Enter the Teledisko, a sort of Fotoautomat 2.0 hyped as “the world’s smallest club”. For €2, you and up to five of your post-tequila amigos can squeeze in for a one-song-long private party. For €4 you can document the ride with four photo booth pictures, and for €6 you can film it – evidence that will be sent to your email immediately.

These party machines are just the latest career move from eccentric Berlin entrepreneur Benjamin Uphues, whose previous ventures include opening a Californian knockoff of Europe’s “dining in the dark” restaurants and ‘borrowing’ and mass-producing a friend’s plans for the world’s tiniest toy car. This time, it’s his own idea – patent pending!

But you’re the one in control of the Teledisko experience, pressing buttons to unleash the lights, fog and photos. It might be a garish addition to Berlin’s grungy, stripped-down club scene, but it’s a successful one, garnering up to 50 uses a night. And should you want the party to come to you, a third, rentable booth will set you back €1800 for 24 hours.