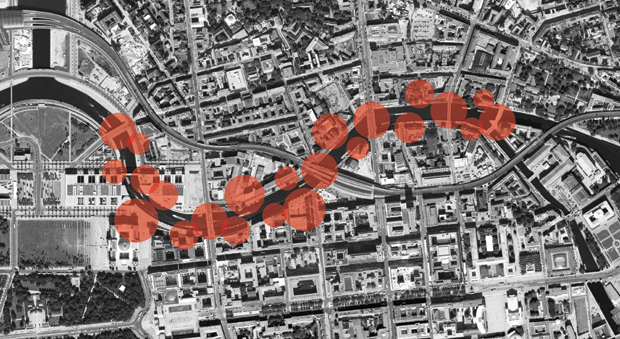 Ever wondered what’s behind the unassuming Bundespressekonferenz and Bundespresseamt buildings and the polished facade of the Marie-Elisabeth-Lüders-Haus? Are you interested in getting an acoustic glimpse inside them and learning more about a little-reported protest that stormed the Reichstag six years ago? A stretch of the Spree now comes with its very own sound effects via composer Georg Klein’s Toposonie::Spree audio tour, now available in English for free on the Radio Aporee smartphone app.

As you take your Iphone or Android for a walk along the riverbank from Museum Island to the Reichstag, various sound clips are played, overlapping both each other and the everyday sounds of the city, giving life to a virtual reality using electronically remastered traffic noises, water sound effects and the disembodied voices of actors, lobbyists and news reporters. Unlike most audio guided tours, the GPS-activated soundscapes allow for a choice of starting point (on either side of the river) and pace, making a calm meandering walk or a brisk power-walk equally possible.

The route, which is also shown as a moving map in the app’s interface, takes you through diverse urban spaces, from grey cobbled streets and baroque revival architecture to greenery and dramatically modern concrete and glass structures. This is an exercise in politics and public affairs, not picture-perfect, postcard-worthy sights.

Radio Aporee is available on Itunes and Google Play. Get more info on Toposonie::Spree at www.toposonie.info