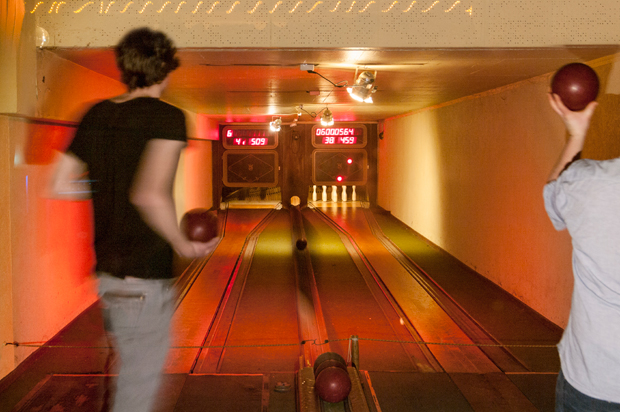 You might be surprised to discover a bar at the dark end of Grüntaler Straße, but Kugelbahn is more than worth stumbling across because owners Jess Schmidt and Uwe Effertz have got a surprise in their basement: an old-fashioned two-lane, nine-pin bowling alley (Kegelbahn).

Previously a musty 1950s-era relic attracting only local retirees, the space was sold off to Schmidt and Effertz in the fall of 2011. Dusting off the cobwebs, they gave it an upgrade fit for perpetually up-and-coming Wedding: a stage for live music, artwork on the walls and a sparkling new upstairs bar serving the obligatory craft beer.

Yet the bowling alley itself remains the same, drawing in newer residents as well as old regulars who, although “they didn’t trust us at first”, kept showing up with sports bag in hand and bowling shoes on feet.

With its out-of-the-way location, offbeat charm and built-in conversation topic, this could be a great date night, provided you don’t get too frustrated by the bowling itself: unlike in the American 10-pin version, Kugelbahn’s vintage European-style balls lack finger holes, making an already-challenging sport even more tricky.

Have the owners mastered it by now? Effertz claimed that they’ve never played on their own, but he hit a spare on the first try.