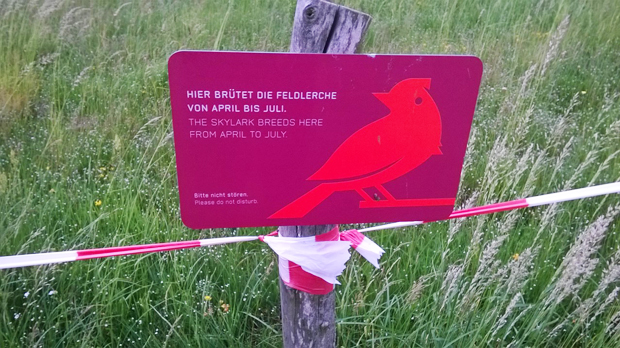 So… the 100% Tempelhof people – whom I previously called “fanatics” – got their way. The people have spoken. Tempelhofer Feld remains “free”. But what about the only true residents of the massive ex-airport? How do they feel about Sunday’s result? To find out I headed down to the inner-city prairie at 8:00 am this morning to have a chat with some of the non-humans living there.

The park is quite the bird sanctuary, so I walked up to the edge of the massive roped-off skylark breeding zone to strike up a conversation with a member of that species. A male was hovering about 10-15m in the air, twittering and tweeting hysterically, scoping the ground for attractive females. “Can’t you see I’m trying to get laid here?” the skylark chirped aggressively.

I waded on through waist-high grass towards that little wooded hillock in the centre of the field, formed by the US Air Force’s former shooting range. It became clear that birds were making good use of the “historical relics” of the airfield. When I reached the fenced-in abandoned propeller plane, I heard an insane amount of chirping emitting from the fuselage. A small bird of unidentified species perched under the wing told me the plane was “like Berghain” at this time of the year. A total free-for-all sex party, in fact. She was just out getting some fresh air after a marathon mating session.

And what of the referendum? “Yeah, I heard about that. That’s cool. But I wish they could ban those idiots taking their kites and remote control helicopters to the park. Totally annoying. And the people who leave disgusting piles of plastic bottles and wrappers and shit.” A beetle trudging across an old sanitary pad in the middle of a footpath echoed that sentiment.

In the wooded area, I chanced upon an expat bumble bee ecstatically rubbing pollen all over his body in a wild rose blossom. He’d somehow drifted over here from East London on an air current. “Life is so sweet here,” the hipster bee slurred. “And cheap.” Unsurprisingly, he wasn’t too up on German politics and stuff. Just “enjoying myself in Berlin.”

I lay down on the grass and finally met someone willing to talk about the referendum, an ant who self-identified as Prussian: “There are like 100,000,000 million of us living on the field. We’ve been here for 20 million years. So I feel like we could have been given a say in the thing. That library was a stupid idea. As was building all those luxury flats. A very top-down idea. As an ant, I could tell you a thing about top-down.”

All in all the animals I contacted were pro-100% Tempelhof – building flats around the edges would have meant more people everywhere. And all of them agreed: stay the fuck on the tarmac, please, don’t go romping through the grass like the moronic giant mammals you are.

No foxes or mice were available for interviews.