Last night we were in front of the French Embassy to mourn, to express our sadness and confusion and to show our solidarity. Some 600 Berliners gathered on Pariser Platz (many French but also Germans and English speakers) holding printouts of the rallying cry “Je suis Charlie” – this and memorable covers of the weekly paper, like the one featuring a monstrous foul-mouthed Le Pen junior and the issue bearing the sadly relevant comic: Muhammad saying, “It sucks to be loved by morons.” Many had candles. We were all Charlie. 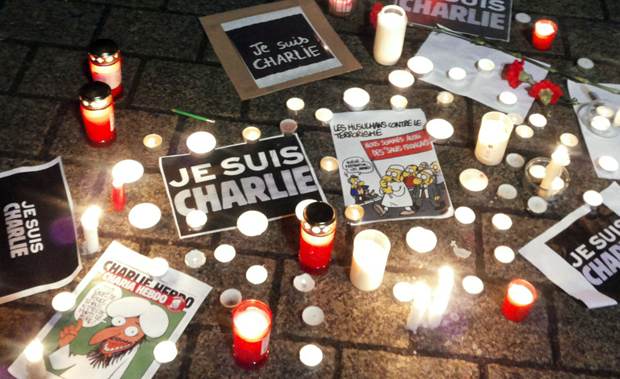 Including Exberliner. This is not the reflex of a press feeling stronger and louder when one of its own falls victim to war or terrorism; neither it is a patriotic reflex from an editorial team led by a Frenchwoman. The murder of our colleagues at Charlie concerns us as citizens of what we thought was a continent where freedom of expression was an inalienable right that could be enjoyed without fear of being bullied, imprisoned or killed.

There are not many such places. Just think about the situation of political cartoonists in many countries from Africa to the Middle East. This morning, I was reminded by the radio of how the famous Algerian press cartoonist, Ali Dilem, stopped showing up at the editorial meetings of his newspaper for fear of being attacked. He courageously still refuses to leave his country, though.

But who would have predicted that a single European satirist (let alone four or five) could be killed for their work in the 21st century? Who could foresee that the entire editorial team of a paper could be decimated, threatening its very survival?

PEGIDA supporters immediately jumped on the occasion to point out that their anti-Muslim slant had been vindicated. (“The Islamists that PEGIDA has been warning of for 12 weeks showed in France that they’re incapable of democracy, that they rely on violence and death as a solution! Our politicians want us to believe the opposite. Does such a tragedy have to happen in Germany first for that to change?”). But let’s face it, these murderers are probably less the children of Islam than they are the product of our own society.

And what makes it worse is to think that the victims – first-league cartoonists like “Charb”, “Cabu”, Wolinski and Tignous – were among the very few in our so-called free world who took freedom seriously, by taking the trouble and the liberty to express different, challenging, at times outrageous opinions. They called it being “bête et méchant” (mean and malicious). They had a sense of irony they gleefully applied to all including themselves. They surely knew how to push where it hurts and their favourite subject was not just Islam, but all religions, as part of a long French tradition of anticlerical leftist ribaldry that took aim at each and every type of fanaticism with a bawdy glee. Le Pen – both father and daughter – were targets. But also the Pope, feminists, the army, etc. Their insolence was unique in the media landscape. You wouldn’t always agree with their output – often it was too silly or unnecessarily obscene – but it was often unexpected, always un-PC and daring. And you found some comfort in seeing Charlie‘s familiar satirical cover among all the serious newspapers at the kiosk. As long as it was there you could be sure we had a free press.

The slaughter of the Charlie Hebdo team feels all the more distressing in the current media landscape, at a time when the press seems to be suffering from a strange rampant conformism – a byproduct of the globalisation of thought, cowardly political correctness, editorial laziness and financial cuts.

That the ultimate representatives of radical satire should be the ones to go doesn’t just feel unfair, but is also a bad sign for our democracies. The democrats at Charlie Hebdo had balls – something you can’t say about many journalists. (And god knows how many pictures of genitals ran on their cover!) They kept on going despite the threats they endured – even when their old office was firebombed in November 2011. A single meeting at the Exberliner office yesterday speaks volumes: as we were discussing which Charlie Hebdo Muhammad cartoons to publish on our website, some members of the staff immediately objected due to ”respect” and the “risks” associated with a such decision. And this is at a small English magazine in Berlin, not in France under terrorism alert.

Whether premonition or fateful irony, Charlie Hebdo’s last edition had a cartoon with the headline “Toujours pas d’attentats en France” (“Still no terrorist attacks in France”). It depicted a bearded terrorist with a machine gun and the caption: “Attendez! On a jusqu’a la fin Janvier pour presenter ses voeux.” (Wait! We have until the end of January to wish a Happy New Year). 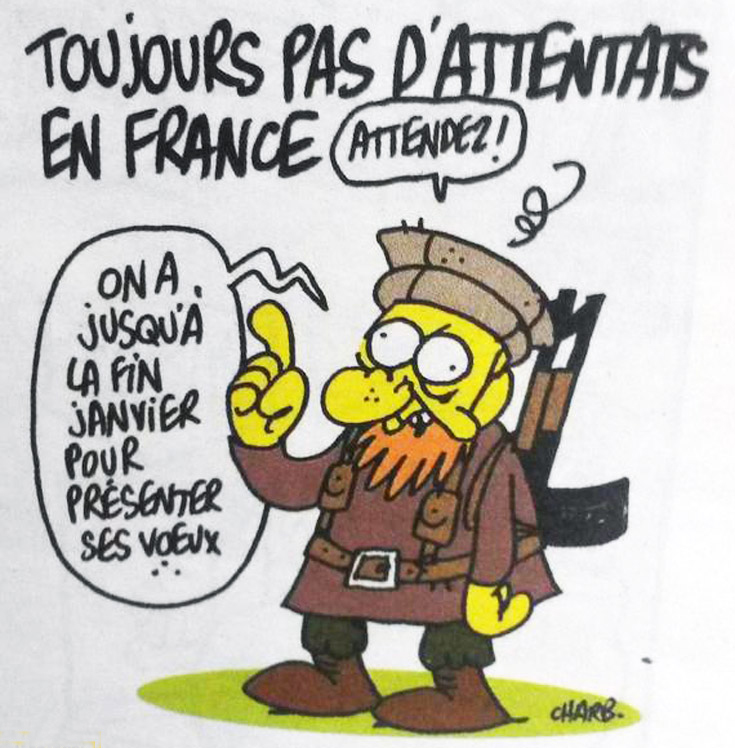 After publishing more Mohammed caricatures (including a parody of the film The Intouchables featuring a conservative Jew pushing a Muslin in a wheelchair), the paper’s chief editor Stephane “Charb” Charbonnier and Charlie’s new office were placed under police protection. He knew the risks, but was never intimidated, memorably stating: “I don’t have any kids, no wife, no car, no loans. It might be a bit pompous to say that, but I’d rather live standing than die on my knees.” They received threats on a daily basis. “We don’t want to be scared – we want to have fun. We’re just trying to do something funny. Humour is not something that fanatics understand. They rely on fear.”

The nutters who rely on fear might have big guns, but their brains must be pea-sized – that one of them forgot his ID in the car seems like a bad joke, itself the stuff of a nasty Charlie Hebdo cartoon. The fact they targeted a satirical newspaper and cartoonists begs the following question: can they actually read? They probably didn’t read the Quran, or so say Muslim clerics. Like many of their ISIS comrades-in-arms and other digital-age jihadists, they’re all the more dangerous because they’re ignorant.

The fanatics love martyrs. They’ve given us our own martyrs – we call them heroes – and we won’t avenge them with weapons. We’ll take revenge by carrying out their mission. We will support their resurrection and take out a subscription. We’ll publish their most outrageous caricatures. We won’t be scared.

These murderers didn’t just kill 12 innocent cartoonists, journalists and French citizens. They targeted the very pillar of our democracies – at least the one thing our Western world can stand proud of: a relative state of freedom. At noon we observed one minute of silence for them, for their families and beyond, for the inalienable right of the satirical press to poke fun at whomever. For freedom of opinion, no matter how contentious. For freedom. Full stop. It might be the worst way to be reminded that democracy has its price. We should stand ready to fight for it.​..