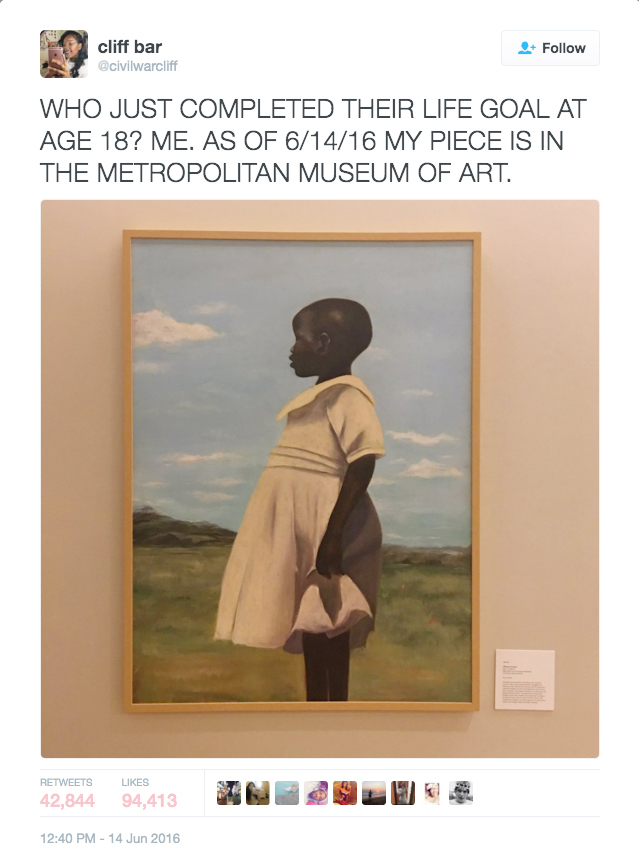 Cliffanie Forrester is 18-year old. One of her paintings, a portrait of a young girl staring off into the horizon titled “Uganda,” is on display at New York City’s Metropolitan Museum of Art as part of the P.S. Art 2016 juried exhibition showcasing “the creativity of 90 prekindergarten through grade 12 students from all five boroughs.”

On June 14 she tweeted “GUESS WHO JUST COMPLETED THEIR LIFE GOAL AT AGE 18?” The tweet went viral within, eight hours. “I tweeted it as soon as I got to the Met, and by the time I was out it had gotten to at least 500 retweets, she told Fusion, the American news, pop culture and satire digital network.

The Huffington Post tweeted: “Dreams do come true: @civilwarcliff is 18 years old and has a piece of art in the Met.”

Even Reese Witherspoon is a huge fan.  She retweeted  “What gorgeous work! Congrats @civilwarcliff

The piece is on view at the Met through October 23. Don’t miss a rising star.