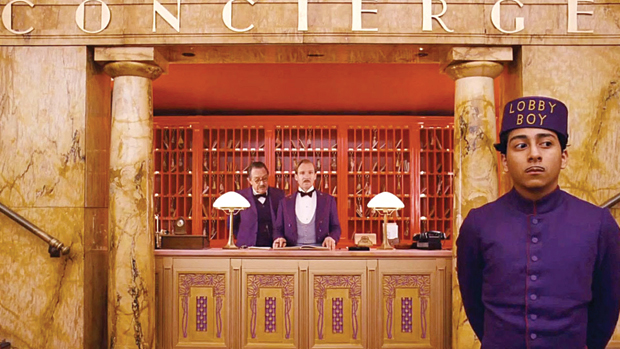 Sasha S., concierge at a five-star hotel in Berlin, tells us about the challenge of granting rich people’s wishes.

Few people understand what a concierge does. Basically, we are there to fulfil desires beyond the usual hotel amenities. Only five-star hotels have concierges. It’s the best job, because you have that challenge: to make the impossible possible. And that’s the moment when it’s the most fun.

I started as a bellhop in February 1998. I wore a uniform with gold buttons, white gloves and a cap with a strap under my chin. Often I just stood in the lobby all day pushing the buttons for the elevator. It had that classic feel, like in The Grand Budapest Hotel (photo)… I was a university student at the time, but I got so into it that the head concierge suggested I switch careers.

A typical situation is that a guest’s luggage gets lost and it’s Sunday and he has a meeting at 11 the next morning. Then you have to know the boutiques that are happy to open up on a Sunday for a high-profile client. That’s quite a common thing. Or a woman needs jewellery to go out. Once we had a businessman who had to go to Poland – he didn’t tell us why – and felt he needed security, so we hired a bodyguard for him. A lot of guests want things from home. We often go to a shop near Tempelhof that sells American products, usually for soft drinks. Like Gatorade, which used to be sold in Europe, but which was taken off the market. We also have a specific brand of water from an organic shop in stock just for a specific guest who wants it every time he’s here. We have bathrobes with initials sewn in for certain regulars. There is a gentleman who wants fresh smoothies made with vegetables and herbs; we order that via an online shop and try to have it ready upon arrival.

But more often than not, you don’t know the guest. So you have to be able to read people well. When someone you’re seeing for the first time stands in front of you and says, “I want to go to dinner tonight and have a good time,” you’ve got to come up with a place that will fit. And of course you also have to know your city well. Part of the job is visiting places, making contacts, trying food. But we can’t know everything firsthand. You have to have the right connections. I don’t know everybody, but I always know people who can help me. Once I had a gallerist who wanted a room in Venice during the Biennale. It was impossible to get a room. But I called concierges in Venice and managed to get him one. Many concierges belong to an international association called The Society of the Golden Keys. To become a member you have to have worked as a concierge for two years. You go through an interview and if you’re accepted, there’s a real ceremony where you get the Golden Keys.

It can be a fiasco if a guest needs something and the courier service can’t deliver it on time. We had a Hollywood star here, and he wanted to send his wife something special for her birthday – a poem he’d written by hand. He wanted her to get it, not a copy of it, but the original handwritten poem, by the next day… in LA! So a colleague jumped on the next plane to LA and managed to deliver it to her doorstep by noon. They were both very happy, I believe.

For things like last-minute tickets to sold-out concerts or exhibitions, we have to rely on the black market. Sellers might want 300 percent of the normal price but because money doesn’t matter, I just take it. During the Berlinale, we also tap the black market – people call us incognito, saying, “Hey, I have Berlinale tickets…” Once I managed to get a German movie star into a sold-out exhibition at the Neue Nationalgalerie by contacting the security at the museum! They ended up letting him in through a secret door without a ticket at all. He was very impressed.

We have many Middle Eastern and Russian guests for whom money doesn’t play a role at all. Europeans want to know what things cost – if I didn’t tell them, they might try to reclaim it, saying they were never informed. But Russians will say, “Don’t tell me how much it’s going to cost, it doesn’t matter.” They’re even offended if I mention the price of something! It’s common for families from the Middle East to book a whole floor, that’s something like 22 rooms and five suites. They come during the summer, often for medical treatment. We had one gentleman who was ill – his kids, uncles and friends were all here, at least 20 people. But he didn’t make it, and died in Berlin. We had to arrange a very expensive private jet and get all the papers to fly a corpse out of the country. But again, money didn’t matter.

At my hotel, we’re free to decide for ourselves what might be required to fulfil a guest’s wish. I don’t need to ask anyone to get the go ahead. But there are limits to what we can do: for example, we’re not allowed to organise drugs or girls. During my first week at the concierge desk here, I didn’t know that. A man introduced himself with a catalogue of women, listing their specialities and so on. I thought, “Great! I’m that cool, modern concierge who can handle requests for girls.” Shortly after that, I had a request from a guest and I arranged girls for him twice. He was very happy. Then on my next day off, a man came to the reception with a huge bunch of roses and an envelope of money for me. My colleagues thought I had an admirer. I said, “No, he’s from this escort company that I used for a guest.” They said, “You’re not allowed to do that!” I guess I was being too literal!

It’s somehow hard to think of any request as unusual – because that’s the essence of the job, to expect the unexpected. Some wishes are, let’s say, more unique: like that American singer who had grass laid out in her suite so that her dog could have the feeling of being outside and pee in the room. Or the sheikh who wanted to buy a Siamese cat with two different eye colours – apparently it brings luck or something. We called around, researched on the web… we finally found a woman who had a lot of cats, one of which had two different eye colours, but she didn’t want to sell that one. She said, “You can have every other one.” In the end, the sheikh got it for €11,000 – money does buy a lot of things!

There are no rules, or typical profiles. Some stars are really just so easygoing and nice. Then you have your average businessman who thinks he’s a king, but you have to treat them equally nonetheless. Part of my profession is to remain tolerant even when it goes against your own grain – “It’s so difficult for me to do this, but I want to do it still.” At the end of the day you made this obnoxious, arrogant person happy, and you feel like you really succeeded.