I’ve been working for the BVG as a driver for eight years. It was an obvious choice for me. As a born Berliner, I’ve been riding the U-Bahn every day for as long as I can remember. It’s meaningful work to bring people from A to B. I don’t have to wonder: Who am I doing this for? I see enough people who are benefiting from it. But when I started my three-year training period with the company, I was quickly confronted with the reality behind the curtain. There’s so much pressure to cut costs that conditions have gotten worse and worse over the years.

Last year, they put fruit baskets out for drivers in the break rooms a few times a week. But then cancelled the practice – supposedly it was too expensive!

The number of passengers is increasing, but there only about half as many workers as there were 30 years ago. As recently as last year, there were two people cleaning a train – now, one person needs to do the same job in the same time. And the vehicles are deteriorating. Three years ago, carriages were pulled out of service as soon as there was graffiti on them. Now that would be inconceivable – the trains would be missing somewhere else. On the U1, a train that is supposed to have eight cars will often only have six. Management hasn’t planned ahead. You can’t get subway trains at a used car lot. You need to order them years in advance. At the moment on the U55, they’re using trains they took out of a museum – the old “Dora” trains that were mostly sold to Pyongyang in the 1990s. Last year, they put fruit baskets out for drivers in the break rooms a few times each week. But then they cancelled the practice – supposedly it was too expensive!

A typical work routine means a six-day week on the subway. I’ll work four or five days, then get one or two days off. So you rarely get a full weekend off. Some of my colleagues do, but for that they have to work “split shifts”: four hours in the morning, then four or five hours off – which is supposedly their “free time” – and another four hours at night. As for me, I drive for about four hours, then I get 30 to 50 minutes of unpaid break, then I drive for another four hours. Our shifts are planned down to the second. So I’ll be waiting at a station when a train arrives, let’s say at 30 seconds past 8:01am. The previous driver will get out and I’ll get in – no time wasted! Every fifth week is a “stand-by shift”, which means I only find out four days in advance when I’ll be working. For workers with families, like me, it’s almost impossible to figure out when you can pick up your kid.

I earn €2150 a month before taxes – which means, including several bonuses, I take home around €1700. But some of my coworkers who haven’t been with the company for as long don’t earn more than €1600 before taxes. The low wages started with the new Tarifvertrag [labour contract] in 2005 – it’s known informally as the Absenkungstarifvertrag because it reduced our wages significantly. We were split into a two-class workforce: Workers who started here before 2005 have 36.5 hours per week, and workers like me who started later have 39 hours. The “old workers” get a bonus of several hundred euros a month, which “new workers” don’t. And there are lots of subcontractors working for the BVG who earn even less. Companies like WISAG do security, SASSE cleans stations and TEREG cleans trains. The workers there have very few rights. A cleaner lost her job because she was in the hospital for too long!

THE LACK OF RESPECT

Some older colleagues have said: “I wouldn’t do this job for so little money.” And they have a point. They have trouble finding new people who want to work here. They even have to employ retired drivers part-time on buses, trams and subways, paying them €450 a month. Lots of young people quit after a few years – some even switch to the S-Bahn, which, if you know about the conditions at the S-Bahn, is rather telling. That’s why they have all those hipster advertising campaigns: “Anyone can be a blogger. Become a bus driver!” BVG management is not very good at their core task – public transport – but they are very professional when it comes to marketing. They have lots of likes on Facebook for “Weil wir dich lieben.” There was one ad recently that went something like: “A bus is like a classroom: The cool people sit in the back and the one in the front just nags.” I mean, bus drivers have a tough job – one of my colleagues has to deal with nausea and headaches caused by the fumes from the cheap new buses the BVG bought recently. Do they really need some highly paid marketing guy making fun of them? Apparently, someone went to the manager responsible for the ad and his response was more or less: “Is’ mir egal.”

I’m a rank-and-file member of the union, and we’re negotiating a new labour contract next year. Two years ago, we protested against temporary contracts at the BVG – and management was at least forced to partially stop the practice until the end of this year. We need better pay and more regular shifts. Ultimately, this isn’t just a question of the BVG management. It’s a public company, so the Senat is responsible. And all of Berlin’s governments, whether red-black or red-redgreen, have been involved in outsourcing and cuts in the BVG. It’s a political question: Do we want the people transporting us to earn decent wages?

As told to Wladek Flakin under the condition of anonymity.

Berliner Verkehrsbetriebe (BVG) was founded in 1928 by Berlin’s then-Social Democratic government to combine the city’s local transport (except for the Deutsche Bahn affiiliate S-Bahn) under one roof. Currently, it employs around 14,400 people, making it the fourth largest employer in the city behind Deutsche Bahn and the Vivantes and Charité hospitals. Even more workers are used via subcontractors for cleaning, ticket checking and social media.

The city provides the BVG with about €300 million per year in public funding. Wages at the BVG start around €1600/month for a full-time position of 39 hours a week, meaning a takehome pay of around €1200. BVG CEO Sigrid Nikutta earns over €433,000 annually.

The company currently has 3000 vehicles and transported more than one billion passengers in 2017. 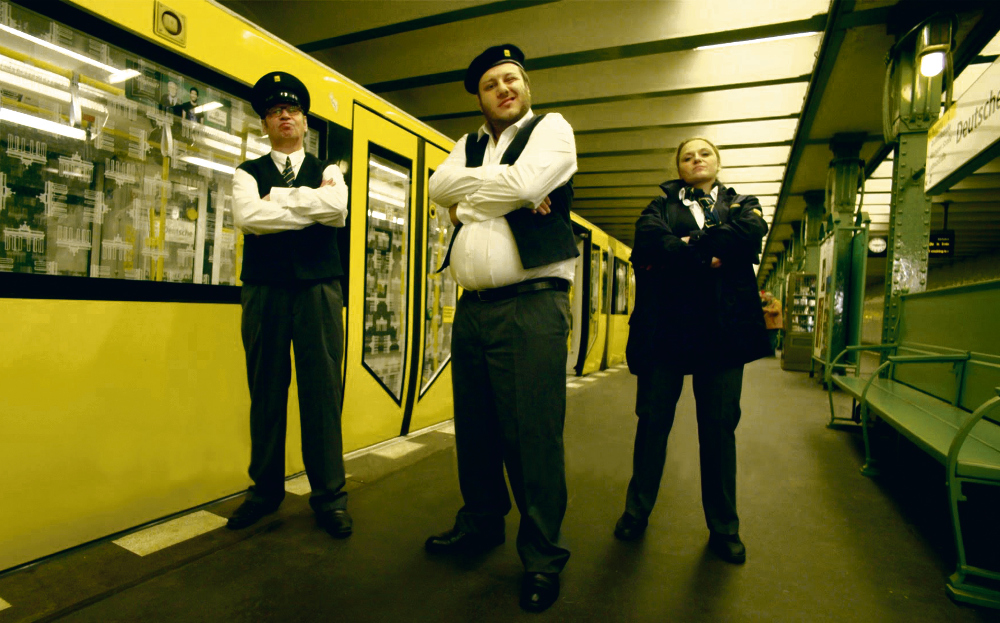 Since the beginning of 2015, the “Weil wir dich lieben” campaign (masterminded by the local ad agency GUD) has attempted to make Berlin’s transport system seem brash and cool – and mostly succeeded. With a social media budget of around €500,000 a year, they’ve garnered 227,000 Facebook likes and 240,000 Twitter followers. Here are a few of their most memorable moments:

January 2017: Posting an image of a snow-covered U-Bahn carriage with the caption, “Eight days until Fashion Week, and there’s already white powder everywhere.”

December 2017: Getting Bono and The Edge to play an acoustic mini-concert on the platform of, yes, the U2.

January 2018: Collaborating on a limited-edition trainer with Adidas that doubles as a €180 year-ticket. Hordes of Berliners camped out in the Mitte and Kreuzberg cold for them – mostly to be disappointed.