Berliners have been warned to “demonstrate peacefully” by Senator of the Interior Andreas Geisel (SPD) ahead of Saturday’s planned protests against government measures to control the coronavirus. Those attending demonstrations should not let themselves be instrumentalized by extremists, Geisel said in a video message in which he directly addressed the growing numbers of campaigners who have been gathering in opposition to the Covid-19 restrictions. Geisel said that while freedom of speech and the freedom to demonstrate still prevail, protesters should be aware that they might be standing shoulder to shoulder with “right-wing extremists”, “violent hooligans” and “citizens of the Reich”. Demonstrations are planned across the city on Saturday, including at Alexanderplatz and the grounds of the Volksbühne on Rosa-Luxemburg-Platz, where the protests first emerged in March. Read our report on the Corona sceptics here.

Meanwhile, there have been nearly 4500 violations of the Corona restrictions in the two months since the introduction of the lockdown, new police figures reveal. Of those breaches, 1530 were illegal shop or Späti openings as well as 2945 “administrative offences”, which mainly involved shops and cafés failing to enforce social distancing measures on their premises. Over the past weeks hundreds of police officers have inspected more than 2600 shops and businesses – much to the annoyance of business owners.

Berlin’s restaurants are officially open to diners for the first time in months today, with restaurateurs contending with strict spacing restrictions. There were reports of only modest demand at lunch today, with Hackescher Markt eateries not exactly brimming with punters. Meanwhile the city’s pubs are complaining that they ought to be able to open now too. “We demand equal treatment,” the owners of the Turandot Kneipe on Kreuzberg’s Bergmannstraße told the Tagesspiegel. Pubs and bars believe that, like restaurants, they too can enforce the city’s spacing rules adequately. 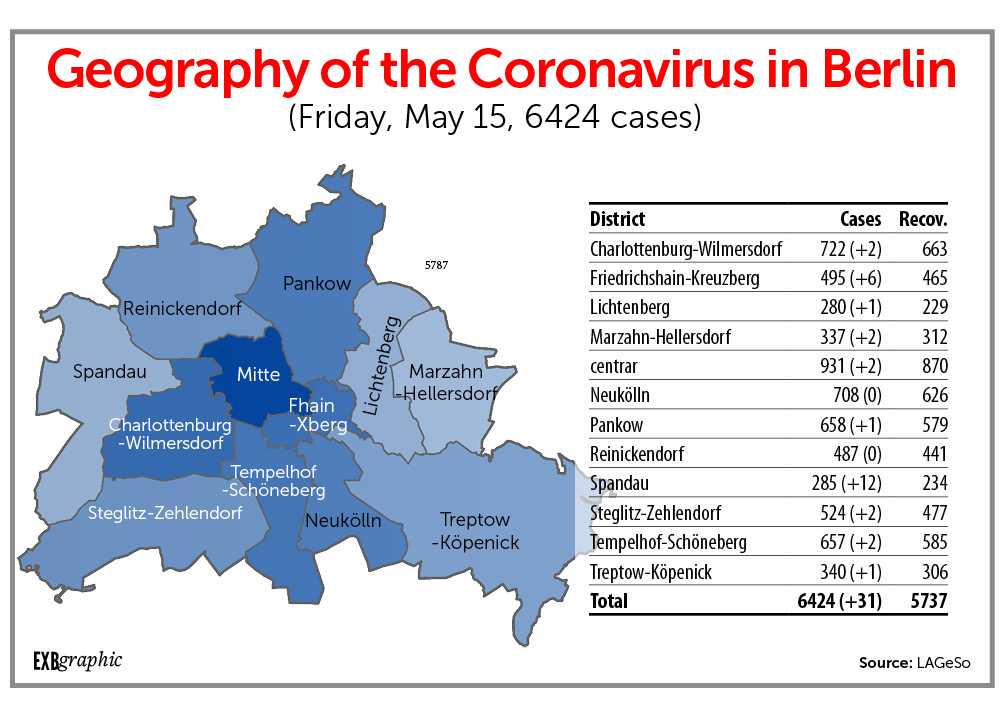 Dancers in the Friedrichstadtpalast are training again. After a several week break, the stages of the theatre and dance venue have lit up once again, with company members returning to practice under strict social distancing restrictions. No more than nine dancers can train simultaneously, with the ensemble dividing into several groups to ensure adequate spacing. Those looking to catch a show will have to be patient, however. The theatre will remain closed to the public until at least August 31.

Speaking of Friedrichstraße, plans to make the street a car-free zone have been delayed. The Mitte boulevard had been planned to open as a pedestrianised zone in June but this has been canned due to the Corona pandemic. “The traffic test won’t be before July, perhaps not until August”, said Stefan Lehmkühler from the Changing Cities Initiative, which helped start the project. Shoppers will have to endure the honking and the fumes a bit longer, then.

Meanwhile, police will be keeping a close eye on fans during the Bundesliga match between Union Berlin and Bayern Munich this Sunday. Union’s grounds in Köpernick will remain largely empty during the match due to the Corona restrictions, and officers will be on duty to make sure there is no build-up of supporters in the area surrounding the stadium. No spectators are allowed in the stadium itself, as is the case for all Bundesliga games.

Pupils are to catch up on their work at special summer schools, according to Berlin’s Senator for Education Sandra Scheeres (SPD). Scheeres wants students to spend the summer surrounded by books so they can make up for all the learning they missed out on during the school closures. “Our goal is to keep the attainment gap as small as possible” Scheeres told the taz newspaper. The idea is that schoolgoers from disadvantaged backgrounds – whose parents may lack the time or education to help their children – spend the next months catching up on material in a classroom setting. For them, school isn’t quite out for summer.

Want to escape the city? Good news: from Friday Brandenburg’s campsites, holiday homes and restaurants have been allowed to reopen, though the usual Corona disclaimer applies, with guests required to follow social distancing and hygiene rules. For those wanting more comfortable accommodation, patience is required: hotels are not due to open until May 25 which, annoyingly, is straight after what will be a long weekend for many. Despite the relaxed rules, Germany’s Camping Association recommends that happy holidaymakers wear makeshift masks whilst they are out and about. It’s a brave new world we live in.

Has Berlin’s coronavirus Patient Zero been found? Apparently yes, if you believe one dentist in the city. While the first coronavirus case here was officially reported on March 1, an anonymous dentist is claiming he observed symptoms of Covid-19 back in early January. The symptoms he dismissed as flu were in fact coronavirus, he believes. Why? In December he spent an evening with friends at a Berlin restaurant, and some of his fellow guests were newly arrived from Wuhan – the Chinese city widely held to be the origin of the pandemic. “I must have been Berlin’s patient zero,” he told the Tagesspiegel.