Berlin’s secondary schools have opened their doors to 10th graders today and according to what the headmaster of Neukölln’s Röntgenschule told the DPA, distancing is not a problem in the nearly empty buildings. But teachers’ union GEW sees disaster ahead: “When more students come, it’ll get chaotic,” their Berlin head Tom Erdmann said. At this point, schools don’t even know how many students could safely be in the same room or when the summer holidays will begin. So, lots of big open questions.

Today also marks the beginning of compulsory mask-wearing on public transport. The BVG is apparently stoked at the amount of passengers actually putting on masks, claiming 95 percent are complying with the new rule. Other observers say only half the people on the S-Bahn and buses actually put on some kind of Alltagsmaske. The mask rule is not enforced, but Berliners are supposed to cover their nose and mouth on public transport – be it with a surgical or homemade mask, or simply a scarf. (German Medical Association boss Frank Ulrich Montgomery has criticised this, saying that “some kind of rag in the face” is not going to help and that scarfs, too, would in theory have to be washed twice a day.)

The district of Tempelhof-Schöneberg has handed out the first 250 free masks made available by the city. District mayor Angelika Schöttler said that 4000 masks had been delivered to each district and that they are going to continue passing them out tomorrow at Rathaus Schöneberg – today’s location – and potentially also at Rathaus Tempelhof. The Senat’s idea was to give reusable masks to people who cannot afford buying theirs, but Schöttler said no checks were carried out. Reinickendorf, too, has started handing out masks at the Rathaus, and Spandau will follow suit tomorrow. 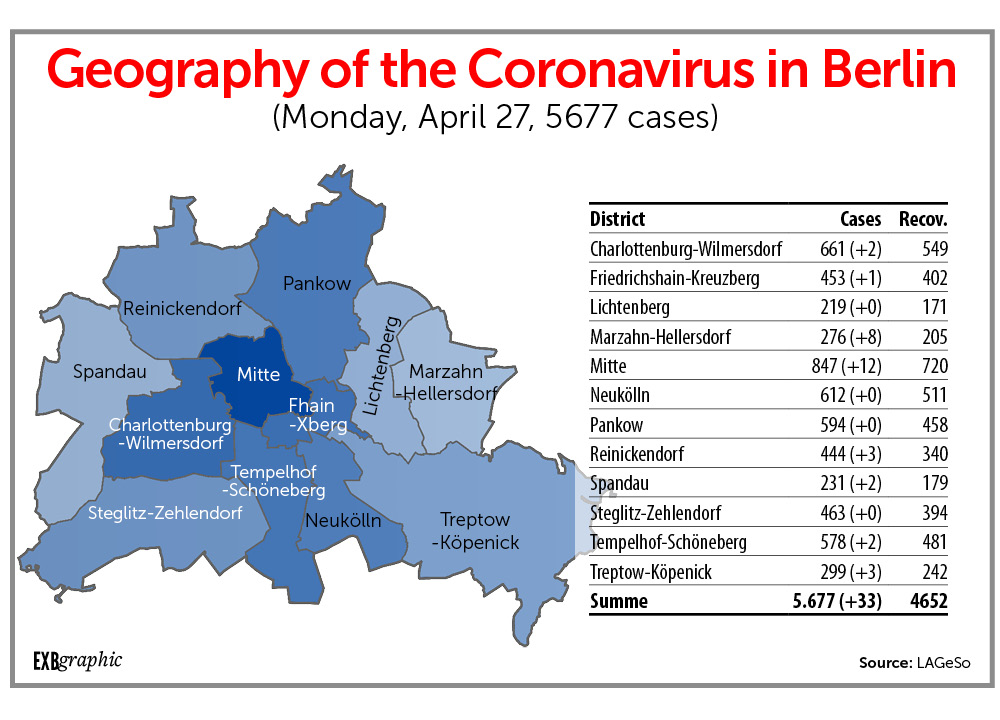 Kreuzberg’s Maybachufer market will reopen tomorrow after having to close down on Friday due to an excess of visitors. The organiser told the Tagesspiegel that on Friday, twice as many people as usual had come to shop there because of the good weather and imminent Ramadan. From tomorrow on, there will only be two entries, one at Schinkestraße and one at the eastern end of Maybachufer. The number of people admitted will be regulated, security will make sure the 1.5m distance is observed and it won’t be allowed to stop and eat or drink at the market.

Brandenburg’s Ministry of Finance has announced that the federal government and German states had agreed to temporarily lighten the tax burden on businesses. Taxes paid for 2019 could be lowered retroactively and businesses could be given extra time to hand in wage-tax returns. No more details have been released so far, but the plan is to give companies some breathing space to be able to pay bills and wages. Now if only someone could tell us why Brandenburg has all the information and we have none…

The airport trade association has spoken out in favour of closing Tegel airport now and for good. According to the organisation Schönefeld is enough to handle all current air traffic. Berlin and Brandenburg are eager to pull the trigger on the location to save money, and Die Linke has pointed out it costs €200,000 per day for nothing. But the federal government wants to wait and airlines are dead against a closure, fearing they’d have to move to Schönefeld and back again (they don’t seem to believe BER is going to ever happen).

May 1, domestic violence stats and a funeral

With only a few more days to go until May 1, Senator of the Interior Andreas Geisel (SPD) has said in front of the Abgeordnetenhaus: “This will not be a normal May 1,” and, referring to the Austrian village that famously became a Corona hotspot: “May 1 must not become Berlin’s Ischgl.” Police chief Barbara Slowiek added that 18 demonstrations had been registered, most of them not approved. Until May 4 only gatherings of up to 20 people are possible and, Geisel said, the police will enforce the rule “whatever happens”.

Meanwhile, the Revolutionary May 1 Committee has said there will no be central demonstration this year, but protest will be spread all over Kreuzberg 36 with temporary meeting points announced on Twitter throughout the day. The organisers have urged participants to come masked and keep the safety distance. The central theme will be the protest against Europe’s refugee policy and the situation in the Greek camps.

The police are registering a higher number of emergency calls about cases of domestic violence – police chief Slowiek spoke of an 34-percent increase since the anti-Corona measures came into effect. However, the number of resulting criminal complaints has barely gone up – 3 percent since the beginning of t the year, including before the pandemic. Do more neighbours at home lead to more “everyday” fights being mistaken for domestic abuse? Looks like that could be the case, but who knows.

Today the police had to deal with the funeral they’d been worried about: More than 100 members of the Remmo family had come to Schöneberg’s 12-Apostel cemetery to bid farewell to a female family member who had died last week. The police had expected even more guests. Around 250 officers were on duty, and helicopters circled the mosque where the funeral service was held as an entire streets were blocked off around the cemetery, where only 20 people were allowed in at a time. Fair to say, someone really went out with a bang.